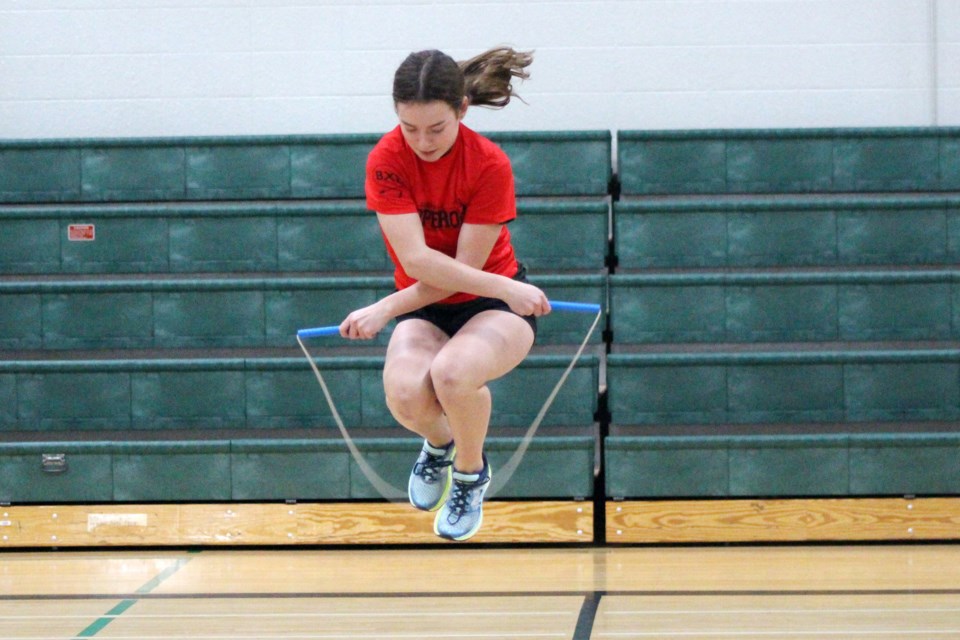 BONNYVILLE – Local athletes are lacing up their sneakers and grabbing their ropes to learn all they can ahead of the competition.

The local skipping club has kicked off their winter session with around 10 recreational members in their weekly classes and four competitive skippers.

Renee Machildon, organizer and coach of the competitive team, noted both groups saw a slight dip in skippers from when they restarted in 2012.

“Numbers are going down a bit, unfortunately. My competitive team last year had eight skippers and now we only have four… Recreation numbers were high for the first few years and have been dropping ever since… It takes a lot of work because we’re all volunteers, most coaches are, but we don’t get out there much to promote it to have that support and coaches available to help.”

Kelly Fersovich, 12, has been part of the competitive skipping group for three years. She encouraged everyone to give the sport a chance “because it’s a lot of socializing, it’s challenging and pretty physically demanding.”

“At the end of the year, when you take a break you almost don’t like it because you want to do something physical, but you don’t because skipping’s over,” she added.

Machildon has seen members of the Skipperoos excel in other activities as a result of being involved with the group.

“It helps with coordination, endurance, and cardio. I’ve had athletes that are doing other sports where even coaches have commented that their vertical jumping is better than some of their other athletes that haven’t skipped, or skippers themselves will notice their cardio is better doing another sport because they’ve been skipping at the same time. It’s a good all-around sport, yet it’s a whole sport in itself and we have competitions for it too.”

Fersovich was among the Skipperoos who participated in the Masters Competition in Blackfalds on Saturday, Feb. 1. She got first for her freestyle in the 11 to 12-year-old category, and finished fifth overall out of 26 athletes.

“My shoe came untied while I was doing speed, so I didn’t do very good in that one,” she noted, adding she has some areas to work on ahead of their next competition.

“I want to upgrade some of the tricks in my freestyle to harder ones, and for speed I’m just going to try and tape my shoes up before I go on. I also want to see if I can get 80 (steps in the 30 seconds).”

The Skipperoos will be competing in Wetaskiwin on March 7 and 8, followed by the provincial championships happening in Calgary from April 4 to 5.

For anyone who doesn’t think skipping is tough, Fersovich encouraged them to pick up a rope with the Skipperoos at practice one day.

“If someone came up to me and say ‘skipping’s not a sport,’ I’d challenge them to skip against me and I don’t think they could keep up with me,” she exclaimed.

Machildon added, “I compete myself, and it’s challenging. There’s different elements that you work towards and it just helps all around with everything… The sport’s evolving with itself, with manipulation of the rope, releasing and catching it. It helps with hand-eye coordination and it really helps to develop different skills and areas in a person’s life that comes in handy.”

Future all stars play hard all weekend
Feb 25, 2020 11:00 AM
Comments
We welcome your feedback and encourage you to share your thoughts on this story. We ask that you be respectful of others and their points of view, refrain from personal attacks and stay on topic. To learn about our commenting policies and how we moderate, please read our Community Guidelines.