Two of Bonnyville's youth soccer clubs won big this month, but not as big as they hoped for.
Jul 19, 2016 1:00 AM By: Lakeland Today Staff 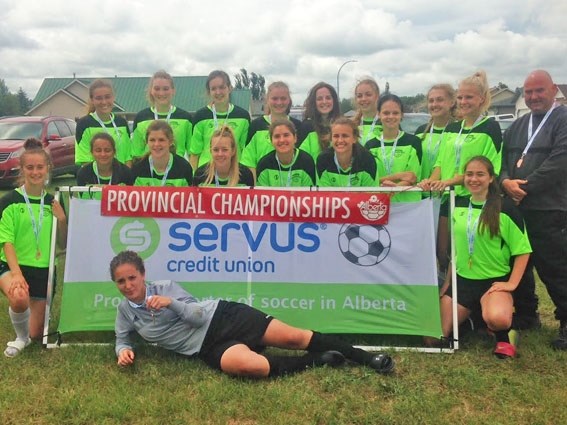 The Bonnyville Breakaway pose with their medals after a hard fought tournament.

Two of Bonnyville's youth soccer clubs won big this month, but not as big as they hoped for.

Both the Bonnyville under 18 Tropics boys and the under 18 Breakaway girls soccer clubs fought hard at provincial finals in Leduc earlier this month and both came out of the tournament with bronze.

During the semi-final against the Lacombe Panthers, Noah Brosseau booted the ball from his own zone across nearly half the field to help score a goal. Unfortunately, it was the Tropics only goal in that game, with the Panthers winning 3-1.

Having fallen to Lacombe, the Tropics came roaring back against Lac La Biche, with Austin L'Hirondelle, Cameron Zelisko, Scott Thackeray and Andreas Sapach each scoring a goal to help the Tropics win the bronze with a 4-2 victory.

“Winning bronze was a good feeling. It's the farthest we've ever gotten in provincials,” commented Tropics head coach Mark L'Hirondelle. “The games were really close. It was a really good, clean competition. The guys all stuck together and played really hard. It was a good time by everybody.”

It was a parallel experience for the girls. Following a disappointing 2-1 loss to the Ponoka Storm, who went on to win the gold, the Breakaway collected their bronze medals after defeating the Edmonton Strikers 4-2.

Zoe Cowan, Harlee Cameron, Kaitlyn Demers and Bobbi Urlacher each scored unassisted goals to seal the deal for the Breakaway, capping off a marvelous season.

“Everyone's happy. We got a bit unlucky in the semi-final, but that's how it goes. You win some, you lose some,” commented Breakaway head coach Dave Cowan. “Kyra Bailey was phenomenal all weekend, she really stood out.”

Cowan added he was going to miss his graduating players.

“I just want to give a great big thank you to Malorie Lafond, Megan Fortier, Bobbi Urlacher, Sydney Thackeray and Danica Gratton. It's their last season so I would like to say well done.”

Soccer is now done for the two teams.