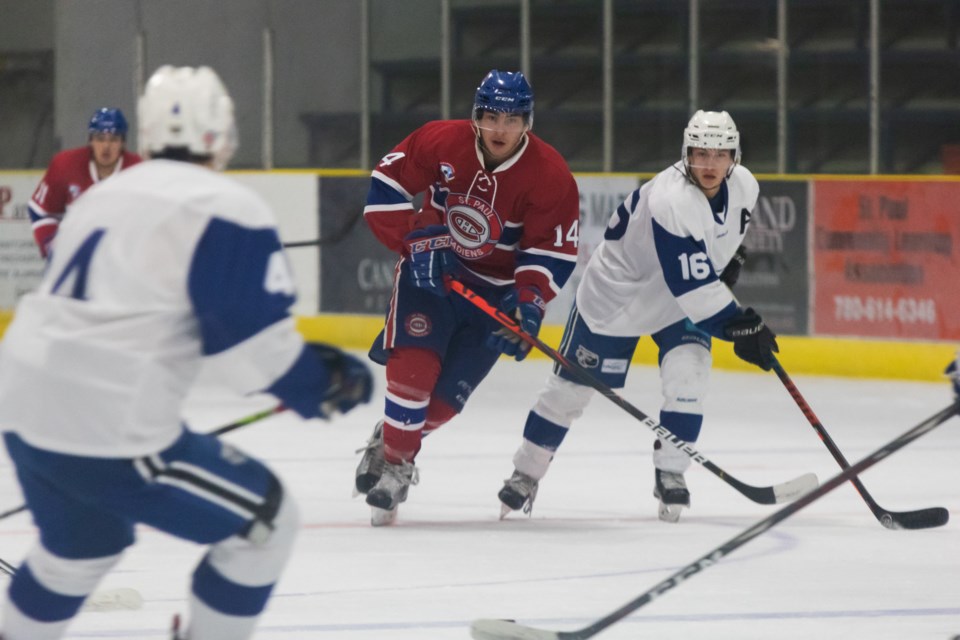 St. Paul- The St. Paul Jr. B Canadiens collected two wins over the weekend in two away games, played in Vermilion and Wainwright.

The Canadiens went up against the Vermilion Tigers on Friday, beating them 4-1. On Saturday, they beat the Wainwright Bisons for the second time in a row, winning 4-2. The Bisons remain at the top of the league.

“Both of our goalies were exceptional in their respective starts this weekend,” head coach Shawn Germain said.

The weekend started in Vermilion, with both teams attempting nine shots but failing to net any in the first period – only to go into the third with a tie, 1-1. St. Paul’s Brody Green and the Tigers’ Caius Quist netted each of the teams’ first.

In the third period, the Canadiens made sure the Tigers would not score, playing a solid game and taking care of the puck all night, according to Germain.

Goalie Hayden Lyons saved 18 of 19 shots on the night. Kurtis Labant collected a goal for the team during a power play with assists from Brayden Goulet and Tison Young, just a minute into the period. Goulet also netted a goal and collected another assist when Brendan Levasseur went for the empty net.

The Canadiens accumulated 10 minutes in the box on five infractions.

On Saturday, against the Bisons, the Canadiens “got a little bit loose in some game management areas at times,” Germain said, adding he was proud of the team’s overall effort.

Goalie Bradley Mistol saved 40 of 42 shots. Penalty totals for both teams were 12 minutes on six infractions.

“We move forward to a couple of very big games next weekend against two very good hockey clubs,” Germain said. “We have lots of things in our game to clean up and we’re excited to do that in practice this week.”

The team will play a home game against the Vegreville Rangers on Jan. 25 at 8 p.m. at the Clancy Richard Arena.

Canadiens lead series 2-0
Feb 15, 2020 2:20 PM
Comments
We welcome your feedback and encourage you to share your thoughts on this story. We ask that you be respectful of others and their points of view, refrain from personal attacks and stay on topic. To learn about our commenting policies and how we moderate, please read our Community Guidelines.