Members of the Lakeland Jaguars were featured on Hockey Day in Canada over the weekend
Feb 14, 2021 11:00 AM By: Robynne Henry 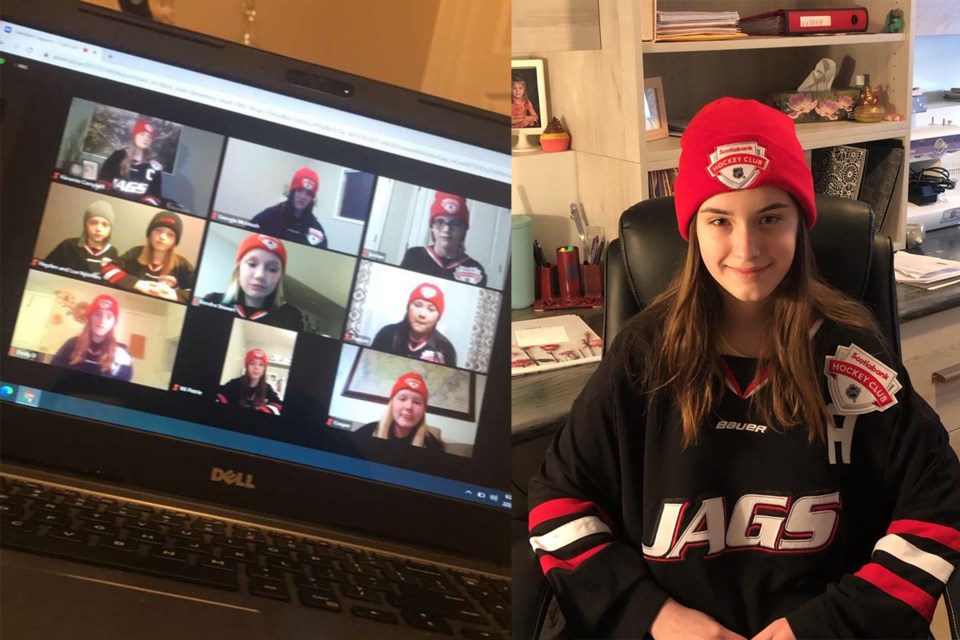 Members of the Atom, U11, and U13 Lakeland Jaguars were featured on the Feb. 13 broadcast of Hockey Day in Canada. Photos submitted.

LAKELAND – Hockey fans who recently tuned into Hockey Day in Canada may have seen some familiar faces.

Members of the Atom, U11, and U13 Lakeland Jaguars had the opportunity to participate in the day-long event on Feb. 13, which featured documentaries on the sport, interviews of young hockey players from across the country, and Canadian teams in the NHL going head-to-head.

This was the 21st year for Hockey Day in Canada. The day celebrates hockey and diversity on the ice.

One of the features of the day is a profile on Scotiabank’s partnership with the Professional Women’s Hockey Players. It explores new programs that will be launched in the coming year that are aimed at making hockey a safe and fun experience for young girls.

The Jaguars were interviewed via Zoom together and some were featured throughout the day.

“We got picked and I was really shocked and surprised when we got to do it because we’re an all-girls team,” noted defenseman Emily Dodman, who played on the U13 Jaguars. “Usually, they look to the boy's teams to do it.”

Left wing Eve Penner said, “It was pretty exciting because I like doing things that involve hockey and I found it interesting.”

A majority of the questions asked were about how each player would make a new skater feel welcomed onto their team. Jaguar centre Karamie Campbell noted that was one of the harder questions she had to answer.

“I said to be open and to accept them no matter who they are,” she recalled.

Penner said she strives to make newcomers feel at home with the team, pass them the puck on the ice, and that she tries to become their friend.

Another question posed to the Jaguars was what their favourite part of the game is. Lydia Eliash, a defenseman on the Atom team, responded: "It's fun to play against my friends."

The team becoming like a second family was Dodman’s answer, along with being able to share the experience with friends.

When they were asked why they got into playing hockey, Dodman and Campbell both said watching NHL hockey when they were younger was what got them hooked.

“I saw a Calgary Flames game on TV against the Edmonton Oilers,” Campbell explained. “My dad’s a big Oilers fan. I think Calgary wiped the floor with the Oilers and I was like ‘wow, that’s so cool. I want to do that too.’”

Some of the girls were lucky enough to have lines given to them, which saw them featured after breaks throwing the broadcast back to the games or to the hosts of Hockey Night in Canada.

“I had a part during the (Calgary) Flames and (Vancouver) Canucks game,” noted Campbell. “I said ‘back to your host’ and six other girls had something like that too.”

It was an experience the Jaguars who were involved won’t soon forget. Some hoped that seeing them on the TV might encourage other girls to pick up a stick and helmet to play hockey as well.

“It could be inspiring to see that girls actually do play hockey and seeing us and they say ‘hey, I could be on TV too if I play the sport,’” Campell said.

Penne agreed, “Hockey is a pretty cool sport and if there’s more girls out there, they can make hockey better or create a league (like the NHL).”