Fans packed into the grandstands to cheer on the Cold Lake Fighter Jets during their first home game in franchise history. The team didn’t disappoint with a 27-6 win over the Airdrie Irish on Saturday, May 25.
May 27, 2019 11:40 AM By: Robynne Henry 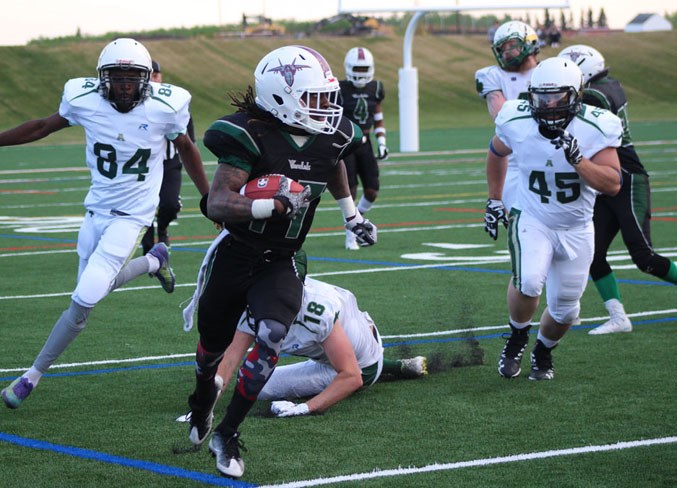 Keeping his eye on his teammates was Melvin Abankwa.

Fans packed into the grandstands to cheer on the Cold Lake Fighter Jets during their first home game in franchise history.

The team didn’t disappoint with a 27-6 win over the Airdrie Irish on Saturday, May 25.

”It was a very special feeling,” expressed Damen Schaub, team president and Cold Lake-native. “I think everybody on the team realized it... A lot of the guys haven’t played in a while, or it was their first feel of contact (football) again, or some guys who’ve never played at all getting their first football game. It was a very special feeling for the new guys, and the vets showed great leadership.”

Head coach Chris McKenna thought the win was a good way to start off the season and to “baptize the facility.”

The Fighter Jets are part of the Alberta Football League (AFL), an organization that offers athletes the chance to play football once their junior and university careers are over.

After the Lloydminster Vandals folded last year and the City of Cold Lake announced construction on the field, Schaub wanted to bring the team to his hometown.

Although the City of Cold Lake didn’t have a men’s football team in mind when construction of the field began, Coun. Jurgen Grau was blown away with the talent of the players and the crowd that came out to cheer on the home team.

”This city has grown so much in the last (few) years in sports, community pride, and everything is always good. This just adds (another) element of that, and I think, for me, that’s the biggest thing is the community pride and just giving more opportunities for the residents,” he continued.

Jayden Keichinger played for the Vandals for five seasons before joining the Fighter Jets.

He said it was amazing to see the stands full of people cheering them on.

”I like the Cold Lake community behind all of us, building the field, and seeing all the fans out. It’s awesome to see all the support behind us,” expressed the linebacker.

Not only does the team put a spotlight on local athletes, but it also allows them to play for a hometown crowd.

”It’s amazing when it comes to the arts and sports how much talent is in this community, and I had no idea,” Grau exclaimed. “They did really well... Just watching some of the plays was awesome, and I’m really proud.”

With their first game behind them, the team now turns their focus to their next matchup against the Calgary Wolfpack.

”We’ve got to work on our running game. We want to do a lot more running with the ball, just being sharper and making sure people know where they’re supposed to be on plays and things like that. We can always get better,” noted McKenna.

They will take on the Wolfpack at home on Saturday, June 8. Kick-off is at 7 p.m. at the artificial turf field.