The Glendon Agricultural Society made the 'heartbreaking' decision to cancelling the 2021 Glendon Demolition Derby and Mudbogs
Apr 29, 2021 3:00 PM By: Robynne Henry 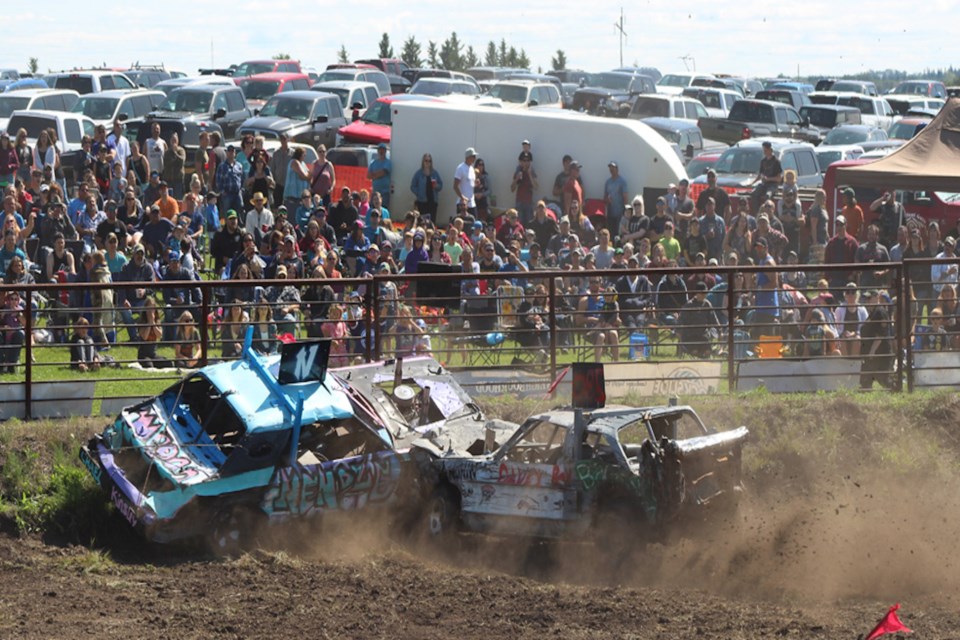 The Glendon Agricultural Society made the difficult decision to cancel the 2021 Glendon Derby and Mudbogs. File photo

GLENDON – It won’t be a dirty and loud year for the Glendon Demolition Derby and Mudbogs.

The Glendon Agricultural Society have confirmed they wouldn’t be moving ahead with the event in 2021.

“We have just seen the numbers in the province with the COVID-19 variants and that the province had gone back to step one (of COVID-19 restrictions),” she detailed. “We realized that we hadn’t started planning yet because we were holding off and it’s a big-time constriction to planning such a big event and not knowing how soon the province will be able to open to that step that we need it to be to have that type of event with such a large amount of people attending.”

Under the Alberta government’s strong public health orders, outdoor social gatherings are limited to 10 people and social distancing is required.

It was the uncertainty surrounding where protocols would be in August that led the board to their decision not to go ahead with the derby this summer.

“It was heartbreaking because we not only rely on the event for a big part of our funding, but we do know how fun it is,” expressed Sandmeyer. “It’s a real draw and event for the Lakeland. It’s tough to see that it’s not going to be there for everyone to enjoy.”

This is the second consecutive year the derby has been cancelled due to the coronavirus pandemic. The ag society had already put a number of hours of planning into the 2020 event when they were forced to call it off, Sandmeyer stated.

“We had already had several meetings and we even had some of our sponsorship dollars. We were really excited about it. We had some new ideas and stuff. It’s tough to have to put on the breaks, but we have to be safe too.”

Glendon has been hosting the derby and mudbogs for three decades. When racers and fans crowded into the fairgrounds in 2019, it marked 30 years of the local ag society organizing the event.

The tradition began thanks to Allen and Debbie Marsh and Myles and Noreen Cotton. The first one was held in 1989 inside the Village of Glendon.

“We used to have a rodeo and just felt like that in the Lakeland and the area that maybe there was quite a few at the time and this was something that was really becoming popular, these demolition derbies,” Sandmeyer recalled, adding the Marsh and Cotton families thought it would be a great idea to start one in Glendon.

“We really appreciate the support that we get from the fans, locals, and now drivers that are coming from farther away. We really are becoming the place to be for demolition derbies.”

The derby was moved to the ag grounds in 1990 after the society approached the council at the time about the possibility, and it’s been there ever since.

With the province ramping up the COVID-19 vaccine roll-out, Sandmeyer has hopes that the 2021 event will be the last the ag society has to cancel due to the pandemic.

“I hope that it's back on with the same intensity and excitement that we’ve had in the past and that people will be starting to get out to these types of events again. We have the space to accommodate an even bigger crowd and more exciting and all kinds of different things to put on for a family.”