Indigenous alumni game a ‘symbolic moment’ that goes beyond hockey

The Clancy Richard Arena was graced with an evening of fun and action on Saturday when the St. Paul Canadiens Alumni hosted the NHL Indigenous Alumni.
Mario Cabradilla & Janice Huser Jan 17, 2023 12:30 PM
Previous Next
1 / 1 Janice Huser
Expand
Previous Next
Listen to this article
00:03:54

ST. PAUL – The Clancy Richard Arena was graced with an evening of fun and action on Saturday when the St. Paul Canadiens Alumni hosted the NHL Indigenous Alumni for a game that celebrated relationships and honoured the spirit of reconciliation.

“It’s really about bringing people together in equality and balance and demonstrating that to the world,” said Patrick Lamoureux, president of the St. Paul Canadiens Alumni Foundation, during a break in play on Saturday.

Lamoureux, who was among the roster of the St. Paul Canadiens Alumni playing on the ice, explained that the event is also a small component of the alumni foundation’s “ongoing efforts of truth and reconciliation.”

“We just happen to be able to share that through hockey, in the spirit of this great old Clancy Richard Arena, and the spirit of the St. Paul Junior Canadiens with the rich history that it has,” said Lamoureux. He dubbed the event a “symbolic moment” beyond hockey and “beyond anything.”

Lamoureux also thanked the alumni’s key partners, and extended thanks to all who supported the event. Special gratitude was also offered to the day’s honoured guests - the NHL Indigenous alumni and members of national women’s ice hockey teams.

“This is legendary, and we just would like all the fans, readers, and the listeners to understand that this is the beginning of many, many events we’re going to continue to plan as part of our alumni foundation,” said Lamoureux.

Armand Cardinal, board member of the St. Paul Canadiens Alumni Foundation and an assistant coach for Saturday’s game, said the event was a “fantastic initiative” to improve relationships between surrounding communities.

Cardinal spoke ahead of the official puck drop on Saturday, speaking about how the sport of hockey “brings communities together.” He also commended the foundation for doing something “unprecedented in the community,” noting the events being planned are being done to “spark positive things going forward.”

Jamie Lee Rattray, who won gold with Team Canada during the Beijing 2022 Olympic Winter Games, was among the professional athletes who took to the ice at the Clancy Richard Arena. Skating with the NHL Indigenous Alumni team Saturday night, Rattray also had the opportunity to visit schools in Saddle Lake and Frog Lake on Friday to talk about her experience and journey.

“Maybe my story can help one person, and maybe they will see inspiration in it,” she said. “Everyone's journey is different, and I think what’s cool about this is that you hear a whole bunch of different stories.” She says she is hopeful that those stories will inspire youth.

When asked if she had a message she would like to share with people who see her as a source of inspiration, she said it is important to trust the process, “control your attitude,” and work “your hardest at whatever you’re doing.”

“That’s something I’ve always valued in my life and my career, so if we can continue to inspire things like that to the youth, I think it’s really important,” she said.

Rattray commended the St. Paul Canadien Alumni Foundation for hosting the event, noting that she is hopeful to be able to do similar events more often.

“I think it brings the community together, and hopefully, we put on a good hockey game for them,” she said.

The Indigenous alumni game was followed by a regular season matchup between the St. Paul Canadiens’ current Junior B hockey team and the Onion Lake Border Chiefs at 7:30 p.m., Saturday.

Prior to the game, the Métis Nation of Alberta presented scholarships to local Jr. B players Noah Balmer and Jacob Leroux.

The final score of Saturday’s Jr. B game was 6-0 in favour of the home team. The Canadiens currently sit at the top of the North Eastern Alberta Jr. B Hockey League. 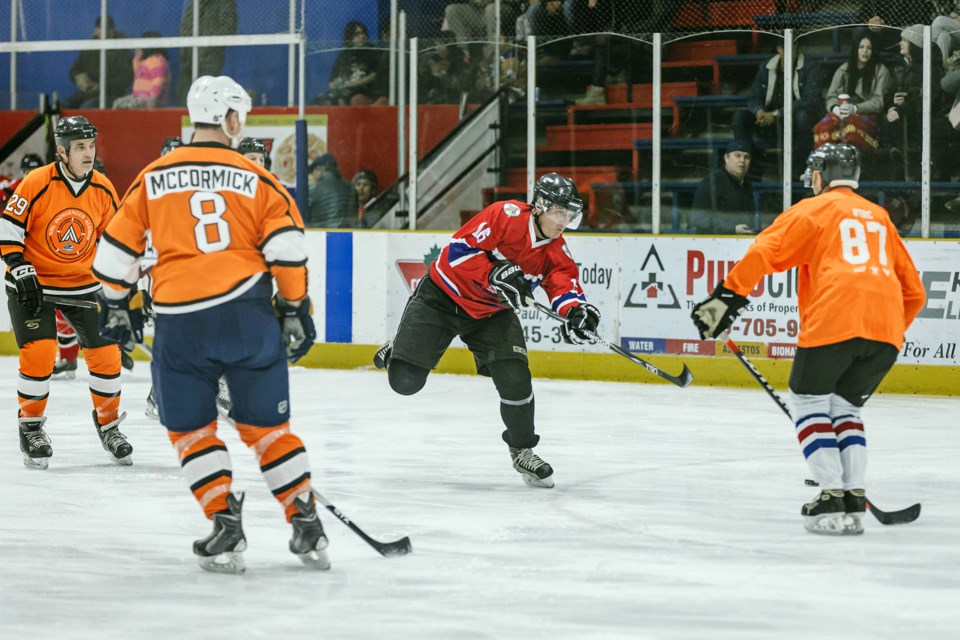