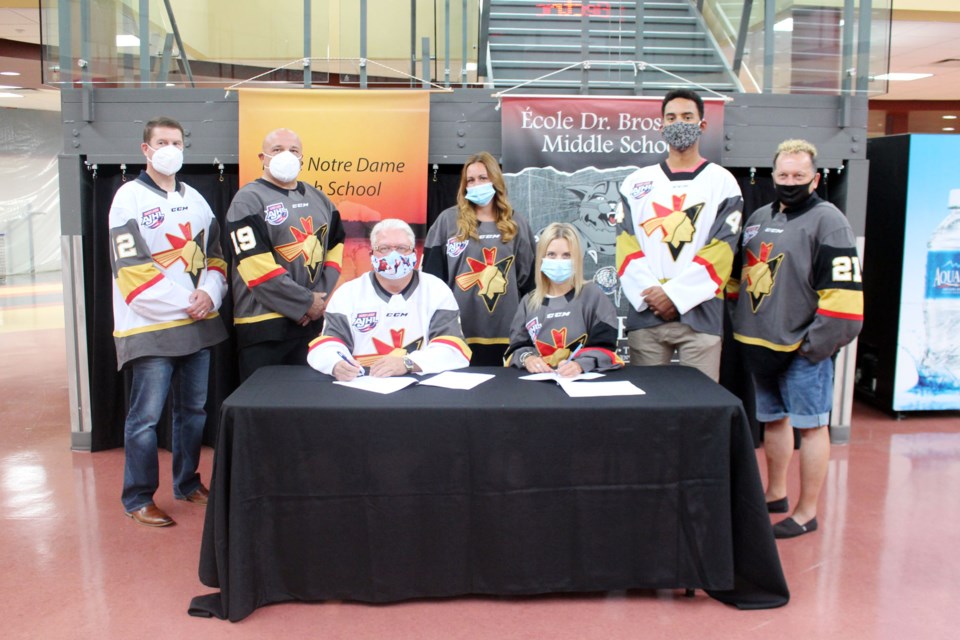 Representatives from Lakeland Catholic School Division and the Bonnyville Jr. A Pontiacs signed on to expand the hockey program in Bonnyville for the upcoming school year on Aug. 7. Photo by Robynne Henry.

BONNYVILLE – More students will be able to take advantage of the Lakeland Catholic School Division’s (LCSD) hockey program in Bonnyville.

Grade 7 and 8 students from Dr. Bernard Brosseau School will have the opportunity to hit the ice as part of their studies. The program, which was launched last year between Notre Dame High School (NDHS) and the Bonnyville Jr. A Pontiacs, allows youth hockey players to combine their love of the game with school.

“The program was so successful with the senior high school students in the previous year. We had heard from families, as well as students, that there was an appetite for a program such as this for junior high school,” explained LCSD communications officer Amanda Wildman.

“At lot of them have a real passion for the sport and I feel like this will just increase their desire to keep playing,” she noted. “It feeds into the high school as well because I know a lot of them want to excel in the sport as well as in school. It's good that we’re meshing that together, but what I think is more important is they have those coaches to influence them not only in the sport but also to push them academically.”

The hockey program at Dr. Brosseau has spots for up to 30 students. Those participating will have on-ice sessions along with in-class portions as well.

This will be the second year students from NDHS will be able to tie up their skates to learn from the Pontiacs.

NDHS principal Vince Spila said the 18 students who participated only had positive things to say about the program.

Pontiacs head coach Rick Swan stressed that their programming is designed to meet an athlete where they're at, and to help them improve.

“It didn’t matter if you were a high-end hockey player or maybe you were somebody that’s just starting out and learning the game a lot better. It was tailored to ensure no matter what level you’re at, we improved your skills and ultimately if you improve your skills that’s going to create more fun and enjoyment being involved with the game.”

Giving each student life skills was another important aspect of the program for both the Pontiacs and the school division.

“Every session, we had a life skill presentation to the players that involved them to get more than just the on-ice portion. Ultimately at the end of the day, sports are a good vehicle to teach young kids and youth about becoming good citizens,” expressed Swan. “That’s just the philosophy that we have with the Bonnyville Pontiacs and it’s the philosophy that they have at both Dr. Brosseau and Notre Dame as well so its been a great fit.”

Spila offered his appreciation to the Pontiacs for continuing the program.

“I would just like to say thank you for this incredible opportunity and we’re so excited to be continuing on with this community partnership.”