Mallaig’s annual men’s bonspiel may, on the ice surface, execute the curling basics of throwing and sweeping, with experienced curlers strategizing before following through with precision.
0
Jan 31, 2017 12:00 AM By: Lakeland Today Staff 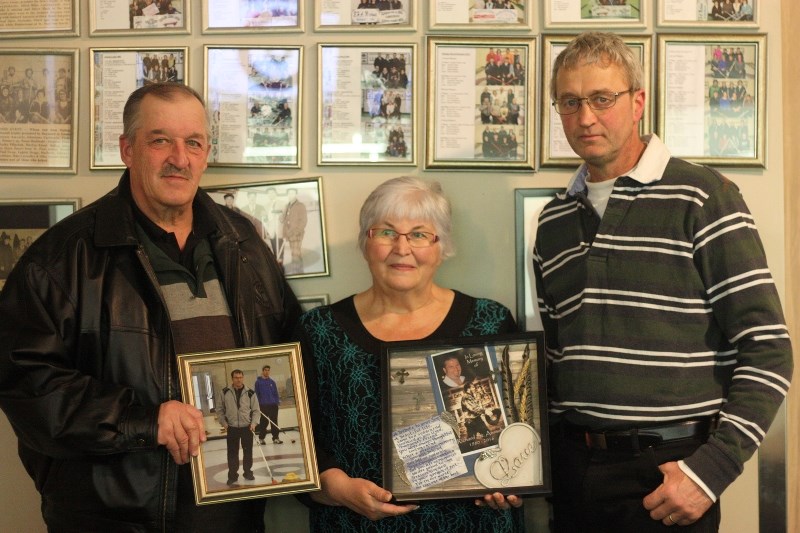 Aime and Yvonne St. Arnault presented a picture of their son Richard, who passed away last year, to Mallaig curling club president Marc Michaud. The picture of Richard will be part of the curling club&#8217; Wall of Fame.

Mallaig’s annual men’s bonspiel may, on the ice surface, execute the curling basics of throwing and sweeping, with experienced curlers strategizing before following through with precision.

But beyond that, the bonspiel held this past weekend is a long-time tradition that even people who no longer live in the community come back to take part in every year, making up the 16 teams that took part this year.

Team Ontario features a mix of brothers and cousins - Gerald Brochu has been coming to the bonspiel for 16 years, missing just a few times, while his brother Ron from Edmonton has made it 16 years in a row.

“Our dads used to curl here. We come here to honour them and their friends,” says Brochu, even as he takes a ribbing from his relatives and teammates that he sounds like a politician. “We’re keeping their memory alive and supporting the club - ”

“My dad curled here, my brothers,” said Yvonne St. Arnault, speaking of the long-time tradition of curling amidst hers and her husband Aime’s families. The couple curled in the community after their marriage, with their children taking on the curling tradition, even after Yvonne and Amie had to give it up.

This year, long-time curler and stalwart of the curling community was honoured.

Yvonne and Aime’s son Richard St. Arnault passed away on July 25, 2016. Richard was a familiar fixture at the curling rink and the annual bonspiel, and Marc Michaud, curling club president, said he couldn’t let the bonspiel come and pass without taking the occasion to remember and honour Richard.

He asked the St. Arnault family if they would mind giving a picture of their son to put up on the club’s “Wall of Fame,” a wall featuring pictures of curling pioneers and community members.

“He loved this place; he felt comfortable here; they always included him,” said Yvonne, adding her son had always looked forward to the curling competitions like the men’s bonspiel, and being a part of any work that needed doing, or community efforts like “cooking with the men for the ladies bonspiel. That was something special for him.”

“If we were short a person, or needed a skip, he’d come skip, because he had the quality to skip a team,” said Michaud.

So when Michaud made the request, the couple was glad to oblige, bringing along Richard’s picture, and a poem, that went up on the Wall of Fame on Friday night, and also providing a $500 contribution to the club for whatever it might need.

It was, said his mother, wiping a tear as she stood before the Wall of Fame, a fitting tribute to her son, for whom curling was such a passion.

Sr. Yaks headed to playoffs
Jan 20, 2020 1:30 PM
Comments
We welcome your feedback and encourage you to share your thoughts on this story. We ask that you be respectful of others and their points of view, refrain from personal attacks and stay on topic. To learn about our commenting policies and how we moderate, please read our Community Guidelines.