Monarchs, Pontiacs and Clippers have up and down weekend in U18 action

Minor hockey is back after new year break. More action on January 14 weekend in local rinks

Lac La Biche's U18 Clippers had a 50-50 weekend, with a win at home on Sunday over the Mallaig Monarchs and a loss on the road to the Bonnyville Pontiacs on Friday night. The Pontiacs had the same results, losing their second game of their busy weekend to the league's fourth place team, the Provost Blades, on Sunday.

Most teams in the Northeastern Alberta Hockey League hit the ice over the weekend, back after a three-week Christmas break in action.

Going into the new week, last weekend's results keep the Pontiacs in third place of the Tier 3 NEAHL's U18 division. The Clippers are in seventh place in the league standings, just two point behind Mallaig, and six points behind fifth-place Onion Lake.

Next up for the Pontiacs is a January 14 game in Cold Lake against the second-place Cold Lake Ice. The Monarchs play the league-leading Vegreville Wranglers the same night.The Wranglers lead the Tier 3 division with a 13-2 record and 26 points overall. The Clippers have a record of 5-10 with 10 points.

The Clippers' next game is on home ice against Cold Lake on January 15.

Most teams in the league will wrap up their regular seasons on the February 19 weekend, giving the 10 more games until league playoffs begin. 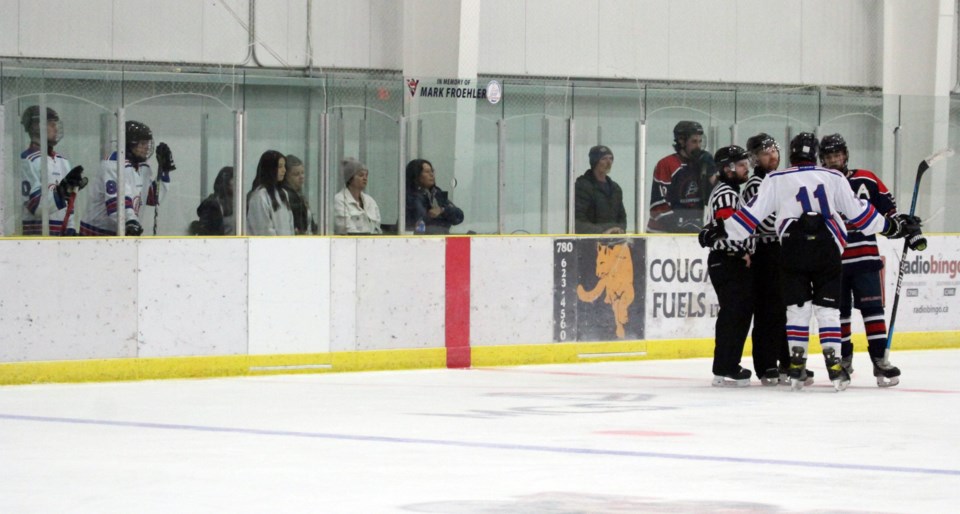 The penalty boxes are full as team assistant captains Warren Durette and Jordy Feland speak to game officials during the last period of Sundays game between Lac La Biche and Mallaig.  The Clippers racked up 30 minutes of penalty time during the game, the Monarchs were assessed for 19 minutes.

Other game results from Lac La Biche Minor Hockey over the weekend saw the U15 Clippers slide into a busy trio of games, losing to Provost at home on Friday night, then losing on the road to Vegreville on Saturday afternoon. Their Sunday result back at the Bold Center was better, seeing them pull even with the Cold Lake Ice in a 3-3 result. The U15 are in fifth place of their eight-team division, 10 points back of the league-leading Vegreville team.

The Plamondon Cougars won their lone game of their U15 Tier 4 weekend, beating Bonnyville 3-1 in a Sunday afternoon game. The Cougars are currently in top spot of their eight-team division. Their next game is a 10 am puck-drop on January 15 in Plamondon against Lloydminster.

The Lac La Biche U13 Tier 3 Clippers dropped a close one on Friday night to Bonnyville. The Clippers were down 4-1 in front of a home crowd midway through the second, but came back to tie the game at five with just eight-and-a-half minutes to go in the last period.  The rally was short-lived, however, as Bonnyville netted their eventual game winner just a few seconds later. The Clippers are currently in last place of thier eight-team division. Their next games are January 14 and 15, hosting both games at home against Edgerton and Athabasca.

The U11 Clippers in Tier 3 lost one and tied one in back-to-back away games, losing in Elk Point on Saturday and playing Wainwright to a 2-2 tie on Sunday. Their next games are again on the road, playing back to back games on January 14 and 15 in Edgerton and Hughenden. The Clippers are in seventh place of their nine-team division, with a record of six wins and seven losses as they go into the final third of their season.

The U11 Clippers in Tier 2 boosted their third-place division standings with three wins in three games over the last weekend, beating Marwayne and Thorhild in back-to-back games on Saturday at the Bold Center, and beating the Pontiacs in  Bonnyville on Sunday. The Clippers are in Marwayne on January 14 for their next game.

The U11 Tier 4 Plamondon Cougars got last weekend off, maintaining their top-spot in their league. The Cougars play January 14 in Bonnyville and host Smoky Lake on January 15.

Scores, schedules and statistic for most Lakeland teams can be found at the Northeastern Alberta Hockey League website