Herbert Erickson was nine years old when he drew his first arrow on his parents’ property just 3 miles North of Elinor Lake.
Nov 23, 2010 12:00 AM By: Lakeland Today Staff 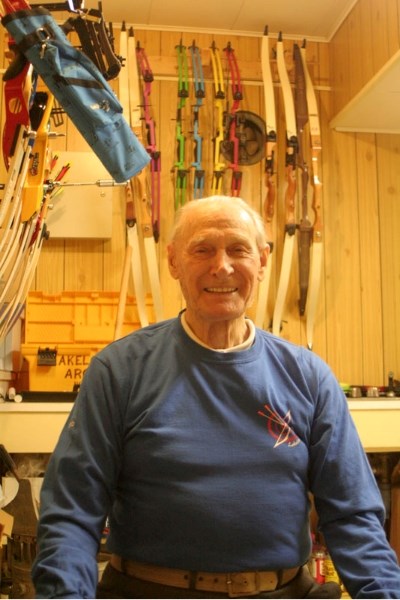 Herbert Erickson has been involved with archery for 86 years and celebrated his 95 birthday last Thursday.

Herbert Erickson was nine years old when he drew his first arrow on his parents’ property just 3 miles North of Elinor Lake.

With his 95th birthday just passed, Erickson is still shooting with a bow and arrow on a daily basis and has no plans on stopping any time soon.

“I still shoot at a target at 20 yards everyday,” said the two-time Canadian Archery Champion.

Erickson, who celebrated his birthday last Thursday, has been a mentor for many kids in the Lakeland Archery Club, so much so the group’s outdoor practice range is named after him.

“If they ask me, I help them,” said Erickson, who is also a Second World War veteran.

The pro archer learned how to shoot from a bow and arrow from local Aboriginal people, who even taught him how to make his own equipment.

A trapper for 44 years, Erickson estimates he has walked more than 26,000 miles over the course of his career, and travelled all over Canada except New­foundland for events.

The local archer’s proudest moment is when he was able to hit a nine-inch wide bulls-eye four times in a row from 80-yards away.

“I figure I have shot more arrows than anyone in Canada today,” said the archer, who attended more than 50 consecutive provincial tournaments and is in Alberta’s Sports Hall of Fame.

As time passed, Erickson stopped participating in tourneys but would often travel with the local archery group to meets where he would entertain the kids with his stories and his quirky skills that have little to do with bows and arrows.

Known for his talent to spin a lasso, jump in it and play the harmonica, many say there would always be a crowd of kids around him at provincial meets, listening to his stories.

“He is a great mentor for the sport and we are lucky to have him in the community,” said Rene Schaub, President of the Lakeland Archers.