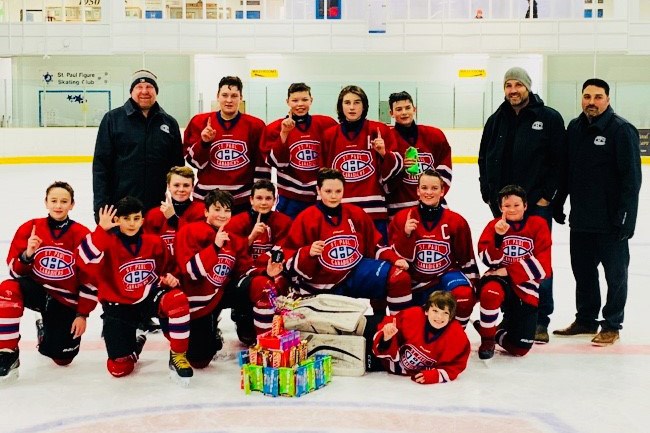 The St. Paul Peewee 1 Canadiens came in first place at their home tournament, held Jan. 4 and 5 in St. Paul.

On Sunday, the peewees won the ‘A’ Final of their home tournament 11-5 against the Confederation Phantoms. While the Fort Saskatchewan Rangers won the ‘B’ Final 6-4 against the Camrose Vikings.

“All the boys played their hearts out,” coach Bryce Balmer said. “Our goaltender, Wade Robinson, kept us in every game and let the boys play the game the way their coaches have been teaching and coaching them to do, which is with a solid effort, a great attitude and a tonne of grit.”

Balmer added that all the coaches are proud of the boys and what they've accomplished in the first half of the season.

“We have the rest of the season to improve and get better as we are making a strong push to succeed and qualify for the provincial tournament at the end of March,” Balmer said.

The Peewee 1 Canadiens started their road to gold by winning their first game Saturday against the Camrose Vikings, beating them 4-3. The game-winning goal was made with just 1.3 seconds left in the third period. The team then went up against the Meadow Lake Colts, beating them 14-1 Saturday afternoon. Then, the team won 8-2 against the Whitemud West Titans in game 3 Sunday morning.

During the final, the Canadiens started the game by netting their first goal just a minute and 21 seconds in. Ryan Balmer netted the goal unassisted. The team then followed this up with two more goals from Kaysen Young and Karsyn Kennedy.

“Confederation quickly followed that up by scoring two of their own, making it 3-2,” Balmer said. “We finished off the period with two more, both from Peyton Duquette, only 24 seconds apart.”

The second period had back and forth action. Confederation found the back of the net first making it 5-3, Balmer said, which the team answered with four goals in the last four and half minutes of the period.

The boys entered the third period with a 9-3 lead and continued to battle, netting two goals, one from Dallaire and a hat trick from Peyton Duquette.

While Confederation also continued to score, it wasn’t enough. The Canadiens won 11-5.

“The players and coaches would like to thank the parents and tournament organizing committee, as well as, all of the sponsors and supporters that helped make the tournament great and memorable for everyone,” Balmer said.

The peewee team is made up of the association’s top peewee players, where players were selected in a try-out process early October. The team has eight forwards, four defences and one goaltender. Players are between the ages of 11 and 12.