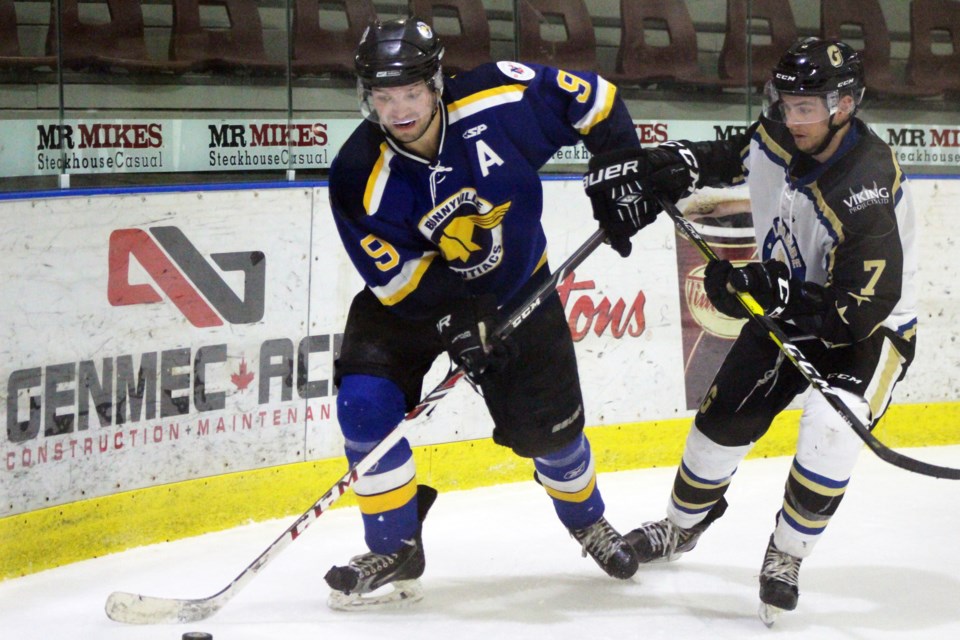 BONNYVILLE – The Bonnyville Sr. AA Pontiacs added another victory to their win streak over the weekend.

Head coach Corey Wandler described it as a big win for the Pontiacs because it landed them a spot in playoffs.

“It was just a gutsy team effort. The guys dug deep and we got contribution from everybody tonight. It’s not always about who puts the puck into the net, it’s about the other things that you’ve got to do to win a hockey game,” he explained. “It was the small details that we talked about before the game, we stuck to our game plan, we just grinded it out and kept digging, and it paid off. We got two big points on home ice.”

“We’re getting better as a team, and I think the boys are gelling as a group, which is making it more fun as well. We’re just going out and playing the best that we can. We make mistakes, but we just brush them off our shoulders,” he detailed. “We just keep pushing, and the results have been better so far. It’s been good.”

Bonnyville took an early lead in the first when Lucas Isley found the back of the Generals’ net less than a minute into the period.

Szudor noted the goal set the pace for the team as they geared up for the second frame.

“In the last three games, we’ve been scoring the first point of the game, so it’s a big momentum boost to start a game. We’ve been able to do that within the first five minutes of every game so far, and it’s resulted in two points each time. It’s pretty big for us, and it’s something I’ve been seeing lately.”

During the second, Pontiac Tayon Metzler added his name to the scoresheet to bring their lead to 2-0.

Although the Generals started the scoring off in the third, they couldn’t catch up to the home team.

Isley widened the gap scoring the Pontiacs final goal of the night for a 3-1 win.

Wandler said the team’s penalty kill was a positive, especially when they were down two players.

“We took two penalties there, they had a five-on-three advantage. It was a crucial part of the game and we killed it off,” he recalled. “We dug deep there, everyone chipped in and grinded it out. We got contributions from all four lines, and this was everyone’s game. It wasn’t just the goalie or one or two guys, it was a team win and that’s the biggest thing for us.”

Another stand out for Wandler was Szudor, who saved 57 shots on net.

“He gives us a chance to win every night, he’s the backbone of this team, and he’s such a competitor. He wants to win, and brings his best every night. We can’t ask for anything more than that,” expressed Wandler.

With two games left in their regular season, the Pontiacs put their focus on holding onto their playoff spot and improving their game when they hit the ice.

“We just want to focus on our process and game, what we need to do to keep building, and getting better,” Wandler stated. “We’ve had three strong wins here in a row, and we’ve got to go on the road next weekend. It’s going to be a new opportunity and challenge for us, but we’ve got to keep growing and keep building our game so we’re prepared for when we do hopefully get into the playoffs.”

Szudor added, “We’ve got to keep doing what we’re doing, because everything seems to be working well. We’re not going to break the machine if it keeps going well, so we’re going to keep a well-oiled machine going and we’ll see what we can do.”

St. Paul Football puts together best of the best from past decade
Jul 28, 2020 8:00 AM
Comments
We welcome your feedback and encourage you to share your thoughts. We ask that you be respectful of others and their points of view, refrain from personal attacks and stay on topic. To learn about our commenting policies and how we moderate, please read our Community Guidelines.