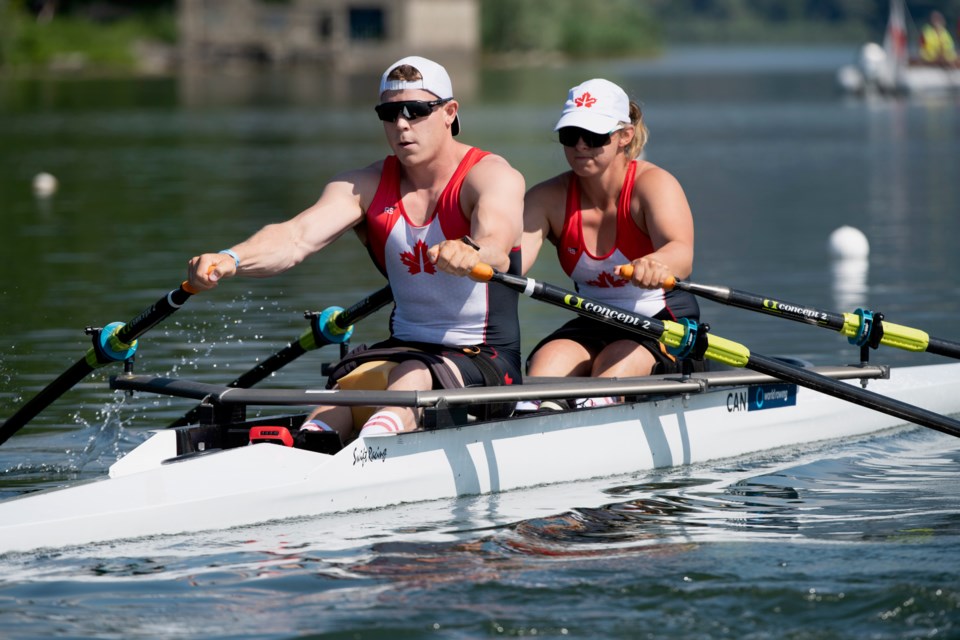 The St. Paul-native needed a rowing partner, a double boat specifically built for para-athletes, and a chance to qualify. Despite the odds stacking against him, he and his rowing partner, Jessye Brockway, will be among the teams competing in the 2021 games in Tokyo.

"Simply going to the Paralympics... it’s something people dream about and only a few are able to obtain. Knowing we’ve achieved that at the very least, is just huge validation, it’s incredibly rewarding. It’s something I will carry with me for life," Hall told Lakeland This Week.

The pair will be competing in the PR2Mix category, which is for athletes who have trunk and arm movement but are unable to use their legs to propel the boat's sliding seat. The games are set from Aug. 24 to Sept. 5, after being rescheduled due to the pandemic.

Hall isn't a stranger to challenges, especially when it comes to sports.

Growing up with a severe case hemophilia, a blood disorder in which the blood doesn't clot properly, it was often an uphill battle.

“It's unique and ironic, I guess, where there’s this stigma that exists where you shouldn’t be playing sports, but that was also my window or my opportunity into sports, is the injuries that resulted from the hemophilia is what opened the door to parasports and some of these opportunities that I have had with sledge hockey and rowing," Hall said.

His dedication is what got him to where he is today, set to compete at the Paralympics in just a few short months.

Hall started rowing in 2017. When he joined the national team, he was the only athlete in his classification category. In order to even try for a spot in doubles for the Paralympics, he needed a female partner.

“I was focused on just making a name for myself and showing to myself and everyone else that I belong,” he said. “Just trying to be the best athlete I can be, put my head down, work hard, and hopefully the results would come."

He moved to Victoria, British Columbia in order to train at the national training centre, and won a silver medal at the World Rowing Championships in the fall of 2018. All the while he continued to search for the second half of his rowing team.

“By the spring of 2019, there wasn’t a whole lot of movement in finding a partner, so I started a social media initiative. It all started with an article from the St. Paul Journal. I had contacted all of my teammates on the able-body side, the para-side, anyone I knew in sports or any of my friends, just asking them to push this out on all of their social media channels,” Hall detailed.

In the end, Brockway stepped up and helped make Hall's dream come true.

Their first shot to qualify for the Paralympics was the 2019 World Rowing Championships.

“We were pretty in over our heads, but we raced our hearts out trying to qualify, and unfortunately I think it was just too little too late for Jess coming in,” said Hall. “We failed to qualify, we finished 11th with only the top eight qualifying out of that regatta."

While they didn't make the cut as a duo, Hall rowed his way to the podium, earning a silver medal in the singles category.

The team had one more shot, the World Rowing Final Paralympic Qualification regatta, but once again, Hall hit a snag. The team didn't have a double scull in Victoria.

"We had to order one. That didn’t end up coming in until the new year, 2020,” he stated, adding it meant they were training as singles for the time being.

A few months after their boat arrived, the COVID-19 pandemic hit and the decision was made to postpone the regatta.

“It was a tough time, an emotional time. We were getting ramped up, getting set, and looking forward to compete at the games. We were getting in that groove, in that rhythm and looking forward to that qualification, and then, all of the sudden, we are at home training by ourselves on rowing,” described Hall, adding it turns out the time off was a blessing in disguise.

"It gave us another year to prepare and it gave me a chance to come and spend some time with family."

The Paralympic rowing qualifications were ultimately rescheduled to June 2021.

“It was challenging, but I think if you take a step back, when you’re in that environment it’s easy to get wound up and frustrated, but when you take a step back, and in going through COVID and everything in the pandemic that we have dealt with in the past year, you realize there’s a lot of other people, many people, that are facing much harder circumstances than we are right now," expressed Hall.

The team packed their oars and headed to Italy for the qualification regatta from June 3 to 5 where they finished third.

“That last race, we had a tough start. It’s a two-kilometre race, so there’s ground to be made up,” described Hall. “I knew those two other boats were ahead of us by a bit of a margin, so I said, ‘if we’re going to make this, we gotta go.’ So, we basically sprinted for 1,000 metres. Coming into the last 200 metres I was thinking to myself ‘we’re hanging on by a thread, but this boat is moving.'”

The finish line was in sight, with just 200 metres left in the race they were catching up to their opponents. But then, the unthinkable happened.

“Jess’ blade caught the water, and when you’re going at that speed and you catch the surface of the water through the recovery... it kind of stops the boat,” Hall detailed. “It was not only difficult for us to deal with... we were closing in on them and we probably had that last spot in our grasp... We were too fatigued at that point and we made a small mistake - it happens.”

It was their coaching staff who let them know they still had a chance, with two spots reserved for team's that show a strong performance and global representation.

"Oftentimes you see these spots go to developing nations that may be facing different circumstances," Hall said.

While they waited to hear if their application was successful, they trained as if they were headed for the Paralympics.

On June 29, Hall was notified the team had made the cut.

Now, Hall said, it's all about focusing on what lies ahead.

“Rowing can be a very technical sport in your blade work, steering the boat, and generating speed in a productive and efficient manner that’s going to be sustainable over two kilometres. If we can find that technical-side and make advancements and develop in that respect... if we can harness that and make it work for us over the course of the entire race, we have a legitimate shot at a medal in Tokyo."

Hall thanked the community that stood behind him during some of the hardest times whether in sports or in life.

"When I was facing a lot of challenges with my hemophilia, my family was incredibly well supported by the community, and I have felt that all throughout my journey."