Students at Bonnyville Centralized High School learned from players from the Western Hockey League
Sep 9, 2020 9:30 AM By: Robynne Henry 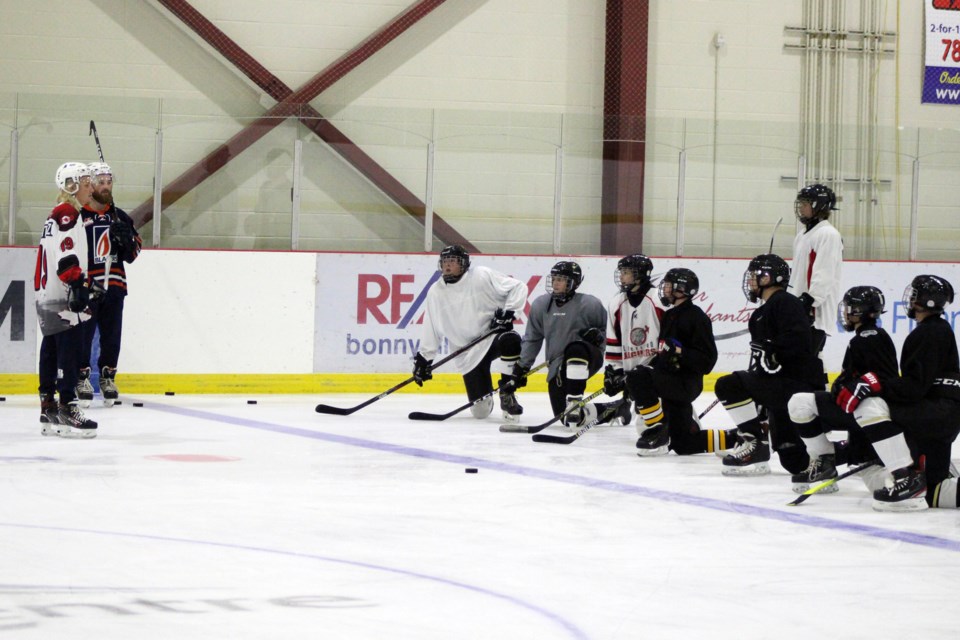 BCHS hosted a student skate and skills event on Thursday, Sept. 3 at the Bonnyville and District Centennial Centre featuring the WHL's Orrin Centazzo and Zane Franklin, who organized drills and skills competitions during the event.

BCHS principal Mark Centazzo organized the event after speaking with his nephew earlier this year.

“I wanted to start the year off as the brand new principal with something fun for the kids that would get some attention and it really happened by accident,” he recalled. “I was speaking with Orrin during May, telling him about my new job coming up and then we got talking about what he was doing in the fall and when he was heading back. The two paths crossed and we (organized it.)”

There were 10 students from Grade 9 to 12 that participated.

Franklin recently aged out of the WHL and is headed to Texas to play in the East Coast Hockey League (ECHL) in the fall. He played for the Lethbridge Hurricanes and Kamloops Blazers, where he served as the captain in his final year. He was also part of the Alberta Junior Hockey League (AJHL) when he played for the Lloydminster Bobcats.

Orrin also suited up for the AJHL's Bobcats before going to the WHL, where he was part of the Everett Silvertips and the Kamloops Blazers. He will once again be wearing the Blazers' jersey this fall.

When Franklin was approached about the possibility of making a stop in Bonnyville, he was all for it.

“Me and Orrin were totally for that because it’s something to fill out time and it’s always good to give back,” he expressed. “We grew up playing small-town hockey and Bonnyville is a little bigger than Marwayne but it’s still somewhat of a small town so it’s been nice to just give back and get to meet these guys and girl and have some fun.”

Most of the activities were what Franklin and Orrin participated in during their practices at Kamloops and they gave them a bit of a twist for the BCHS students.

“The last couple of drills we did some competitions to see who’s the most accurate shooter, a shoot out, and we figured out some other stuff to do as well,” Franklin noted.

Grade 10 student Hannah Thorne said the stickhandling drill was her favourite part of the day. After the coronavirus prevented hockey teams from being on the ice, she was glad to be able to participate and learn from players that have a high level of experience.

“After COVID-19, you miss so much hockey so it was nice to start off the year with something fun.”

A highlight for Franklin was seeing the students enjoying themselves.

According to Centazzo, there’s a possibility for the program to happen again in the future and he hopes to be able to open it up to more schools.

“We had some younger folks from H.E. Bourgoin Middle School that weren’t allowed or didn’t get to come because they weren’t part of BCHS and because of the COVID-19 rules, we couldn’t be mixing schools,” he explained. “I even had some calls from Cold Lake, so  there was some interest.”