Ontarians should celebrate holidays with own household only: government 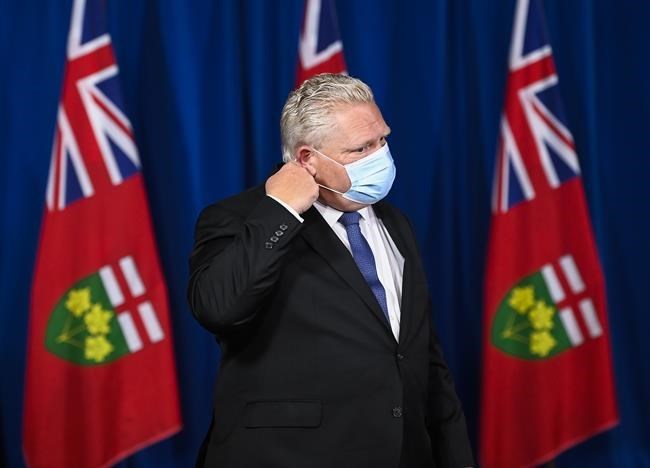 TORONTO — Ontario residents should celebrate the upcoming winter holidays only with the people they live with, regardless of the COVID-19 situation in their region, the provincial government said Wednesday.

The province issued its initial guidance for the holiday period, saying it knows Ontarians are already making plans.

It said those who live alone can join another household to celebrate, but everyone else should stick to their own household and follow public health guidelines for their area.

"This year isn't like any other," Premier Doug Ford said in an afternoon news conference.

"We are in the second wave of COVID-19 and we can't take any chances. We have to bend the curve and stop the spread of this awful virus."

Critics said the holidays could have looked much different if the government had taken faster, more decisive action to combat rising case counts this fall.

“It’s heartbreaking to think about everyone who will be separated from their loved ones during the holidays. It should never have come to this," NDP Deputy Leader John Vanthof said in a statement.

"Now, thanks to Ford’s choices, we are forced into more shutdowns in more parts of the province, with more people getting sick and many losing their lives."

The premier said he listened to the province's top doctor and its health team in making those decisions, noting the government has tried to balance health and economic concerns.

Toronto and neighbouring Peel Region were moved into the grey or lockdown level in the province's tiered COVID-19 restrictions system this week, with tougher measures to stay in place at least until the week of Christmas.

Public health measures under the lockdown level include a ban on indoor gatherings except with those in the same household, as well as closing down restaurants for all but takeout and delivery.

The province's top doctor said earlier this week it seemed unlikely the situation would improve in those regions enough over the 28-day lockdown period to warrant moving them to the red alert level, which is one level lower.

Toronto Mayor John Tory said that while there will be some enforcement of the guidelines over the holidays, it will largely be up to residents to regulate themselves.

"I've been asked for weeks now, were we contemplating having people going around on Christmas Eve and knocking on doors or peering down chimneys or any such thing? And I said, 'Of course not,'" Tory said Wednesday.

"By and large, people are going to have to enforce this themselves ... because they think it's in their own best interests and the interests of their families, and their neighbours, and their co-workers, and their friends to keep people healthy."

The province reported 1,373 new cases of COVID-19 on Wednesday, and 35 new deaths linked to the virus.

Health Minister Christine Elliott said 445 of the new cases were in Toronto, while 415 were in Peel Region.

Ontario's most recent modelling showed the province is on track to see up to 6,500 new daily cases of COVID-19 by mid-December, though those projections are expected to be updated Thursday.

-- with files from Nicole Thompson

This report by The Canadian Press was first published Nov. 25, 2020.