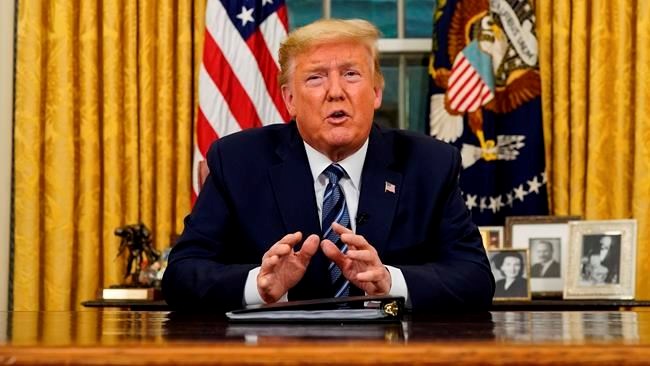 Canada and the United States conferred over the fate of their shared border while the provinces pleaded for cooler heads to prevail Thursday, after President Donald Trump slammed America's door on foreign nationals who have been in outbreak-racked Europe.

"I spoke with him about the very strong public health system and health-care system in Canada and the measures we are taking to combat the coronavirus," said Freeland, adding the two agreed to keep the lines of communication open.

Business leaders implored the Trudeau government to avoid overreacting and to ensure Canada's border agents could keep potential virus carriers out of Canada without hindering access to the crucial American market.

Trump's prime-time Oval Office announcement had more to do with politics than public health, said Perrin Beatty, the president of the Canadian Chamber of Commerce.

"There's a concern we may face, whether in the U.S. or elsewhere, (of) pandemic protectionism — people will want to seal off markets, (and) use the excuse of the pandemic for doing so," Beatty said in an interview.

Canada doesn't have to move in lockstep with the United States but "we have to be concerned if we get too great a divergence that suddenly that we find problems on our border and problems doing business with our largest customer," he added.

Goldy Hyder, the president of the Business Council of Canada, called the Canadian government's response to COVID-19 "spot on," and urged it to think twice before acting. "We have to look at protecting that flow of services and that flow of people in what is effectively 75 per cent of our economy."

Ontario Premier Doug Ford was in Ottawa with most of his counterparts for a first ministers meeting — a gathering that turned into a conference call with Prime Minister Justin Trudeau self-isolating at home. Trudeau's wife, Sophie Gregoire Trudeau, was awaiting the results of what would turn out to be a positive test for COVID-19.

"We have to be vigilant, keep an eye on our borders, make sure that we're doing proper screening," Ford said. "We have to look at this as North America, not just Canada … it's absolutely critical we keep the borders open and have the trade flowing back and forth."

Trudeau and Trump spoke by phone Thursday about their shared goals in dealing with the outbreak — protecting "the health and safety of their citizens and to promote economic resilience," the Prime Minister's Office said in a statement.

"The prime minister and the president welcomed the close co-ordination between Canada and the United States in managing this challenge, including as it relates to the Canada-U.S. border, and looked forward to staying in touch."

But closing the Canada-U.S. border should be a non-starter, he insisted: "There is no single action which would impose greater cost on the Canadian economy."

Trump's order, which takes effect at midnight Friday, only applies to the movement of human beings, not goods or cargo, despite what he said on television. It covers only foreign nationals who in the last two weeks visited one of 26 countries in Europe that allow free and open travel across their borders. American citizens and permanent residents are exempt, and will be directed to one of 13 designated U.S. airport where they can be screened.

A persistent effort to start banning international visitors could have deeper implications for globalization and the unfettered movement of goods and people around the globe, warned Chris Sands, director of the Canada Institute at the Washington-based Wilson Center.

"There are a lot of implications here that are quite worrisome," said Sands, a Canadian-affairs scholar at the Johns Hopkins School of Advanced International Studies. "The potential economic damage of this is very high ... and there doesn't seem to be any path for Europe to fix it."

Canada will have to "seriously consider" whether to follow the U.S. lead to keep traffic moving between the two countries, he added — all the while working diplomatic channels to find a better solution, including ways to ensure Canadians don't end up on the wrong side of the next White House proclamation.

Matthew Mitchell, a professor of international business and strategy at Drake University in Des Moines, Iowa, likened the response — and the likely economic and social fallout — to the terrorist attacks in New York and Washington on Sept. 11, 2001.

"I ran with the bulls 25 years ago, and I think about coronavirus in much the same way as I do the bulls in Pamplona," Mitchell said. "It's not necessarily the bulls that are going to hurt you. It's the people that get scared and trample everyone else because of the bulls."

The fallout from 9/11 was precisely that, he said — it wasn't terrorism that cost the global airline industry tens of billions of dollars in the immediate aftermath, but the fear of it.

"So the message that we're trying to promote is one of appropriate preparedness, and not panic. It's our collective response as individuals, as nations, as a world that's going to determine the outcome of this."

In the meantime, Sands suggested a short-term silver lining for Canada among would-be European tourists looking to rescue their vacation plans.

"It sends a message of low confidence in the U.S. government," he said. "Maybe it will have people thinking, 'Let's go to Canada instead for summer vacation.' "

This report by The Canadian Press was first published March 12, 2020.

— With files from Joan Bryden and Stephanie Levitz in Ottawa