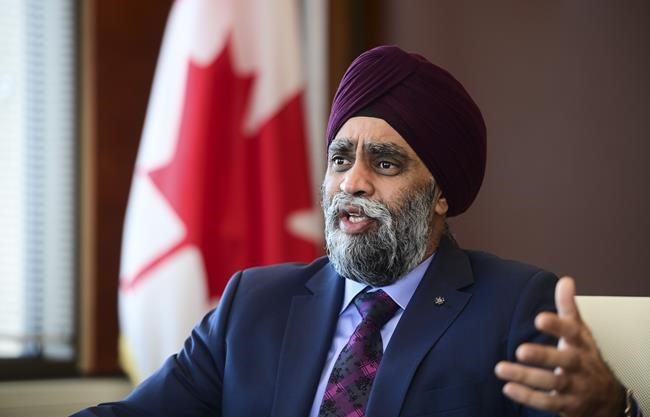 OTTAWA — The federal Conservatives plan to summon two senior Liberal aides to testify on when they first learned of sexual misconduct allegations surrounding the military's former top soldier — and account for what they did about the accusations.

The Tories said they will ask the House of Commons' defence committee on Monday to have Zita Astravas and Elder Marques appear in the coming days, as opposition parties continue digging into the government’s handling of the allegations against Gen. Jonathan Vance.

Astravas was Defence Minister Harjit Sajjan’s chief of staff and Marques was a senior adviser to Prime Minister Justin Trudeau in March 2018, when former military ombudsman Gary Walbourne says he first raised an allegation against Vance to the minister.

Walbourne did not reveal the nature of the allegation, citing a promise of confidentiality to the complainant. But Global News has reported it was a lewd email that Vance allegedly sent to a much more junior soldier in 2012, before he became chief of the defence staff.

An email obtained by The Canadian Press showed Astravas writing to Walbourne on March 5, 2018, four days after the former ombudsman says he met with the minister, asking if Walbourne had talked to the Privy Council Office about an unspecified allegation.

The Privy Council Office is the department that supports the Prime Minister’s Office.

Astravas, who is now chief of staff to Public Safety Minister Bill Blair, and Marques, who left the Liberal government in late September, also discussed concerns related to the Canadian Armed Forces’ commander, according to a Globe and Mail report.

Prime Minister Justin Trudeau has said he wasn’t aware of any specific allegation against Vance, telling reporters on Friday that “The ombudsman did not provide sufficient information ... to be able to follow up on these allegations.”

Sajjan, for his part, has refused to confirm Walbourne notified him of any allegations against Vance, and told the committee he was surprised when Global News reported two allegations of inappropriate conduct against the former defence chief last month.

The defence minister has also said he always followed proper procedures whenever an allegation of sexual misconduct was brought to his attention. Opposition parties have disputed that assertion, alleging the Liberals are trying to sweep the affair under the carpet.

“Canadians need to get answers from those directly involved in this Liberal cover-up,” Conservative defence critic James Bezan said in a statement on Sunday.

“That’s why we will be moving a motion to have Minister Sajjan’s former chief of staff, Zita Astravas, and senior Trudeau advisor Elder Marques testify at defence committee.”

The Conservatives have indicated that they also plan to call Sajjan back for a second round of questioning.

The Global report alleges Vance had an ongoing relationship with a subordinate that started more than a decade ago.

The report alleged the relationship continued after he was named chief of the defence staff in 2015, at which time he promised to root sexual misconduct from the Armed Forces.

Global has also reported on the allegations concerning Vance's email to a much younger female officer in 2012, allegedly suggesting they go to a clothing-optional vacation resort.

Vance has not responded to repeated requests for comment from The Canadian Press, and the allegations against him have not been independently verified. Global has reported that Vance has denied any wrongdoing.

Military police have launched an investigation. Sajjan has also promised a separate, independent probe, but it has yet to begin.

Walbourne testified to the House of Commons’ defence committee last week about his closed-door meeting with Sajjan on March 1, 2018, saying he told the defence minister that an allegation had been made against Vance.

The former ombudsman told the committee that Sajjan declined to look at supporting evidence and instead referred the matter to the Privy Council Office. Walbourne said that was despite his having asked the minister to keep the matter confidential.

Sajjan’s office has said the minister “disagrees with parts of (Walbourne’s) testimony that occurred in committee.”

The Conservatives have also said they want to expand the committee’s study to include the government’s handling of allegations of misconduct against Vance’s successor, Admiral Art McDonald.

McDonald temporarily stepped aside as chief of the defence staff late last month, only weeks after succeeding Vance in the role.

Acting defence chief Lt.-Gen. Wayne Eyre sent a letter to Canadian Armed Forces personnel on Friday praising their commitment and professionalism while acknowledging the presence of “elements of our military culture that need, must and will change.”

“Certain behaviours and attitudes exhibited toward our personnel are beyond troubling,” he added.

“None of us should ever tolerate, or condone, behaviour or attitudes that threaten the well-being of our people. The road will not be easy, but we will emerge a stronger, better and more effective Force.”

This report by The Canadian Press was first published March 7, 2021.