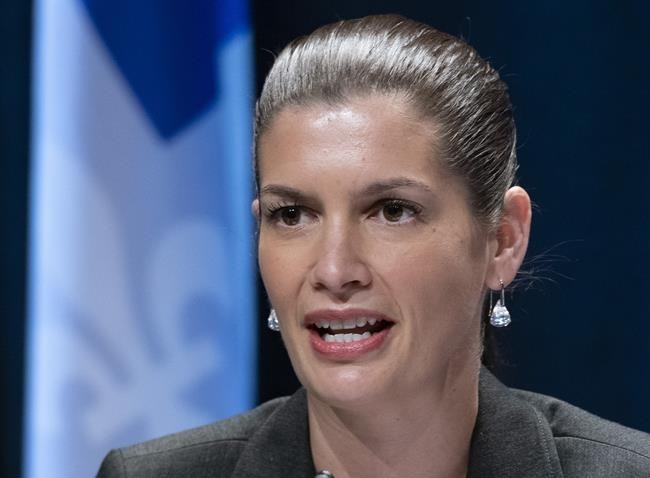 Quebec says it is allocating about $65 million to combat rising gun violence in big cities across the province.

Police chiefs in big cities are reporting an uptick in gun crime and are seizing more weapons compared to previous years, she said.

Sylvain Caron, Montreal's police chief, said there have been about 40 gun-related cases in the city since June. Montreal, he said, is reporting double the number of gun crimes compared with the same period last year.

Caron said he doesn't know why the cases are rising.

Several shootings have occurred in the city's Montreal North borough in recent weeks. A gunfight in Old Montreal in September injured five people including a police officer.

Since authorities ended COVID-19 lockdown measures in the summer, Caron said, "We've seen at least 40 cases (with guns), a murder and about 10 attempted murders. We've seen an atypical increase in crimes involving guns."

The money will fund units in the provincial police and in the Montreal and Quebec City police that specialize in online weapons trafficking and in organized crime.

About $28 million of the funding is coming from the federal government's program to reduce violence tied to guns and gangs, and will be spent over three years. Quebec will invest $38 million over five years.

Alek Minassian not psychotic at time of van attack, psychiatrist testifies
Nov 26, 2020 11:15 AM

Court strikes down consecutive life sentences; Quebec mosque shooter has sentence cut
Nov 26, 2020 11:03 AM
Comments
We welcome your feedback and encourage you to share your thoughts. We ask that you be respectful of others and their points of view, refrain from personal attacks and stay on topic. To learn about our commenting policies and how we moderate, please read our Community Guidelines.