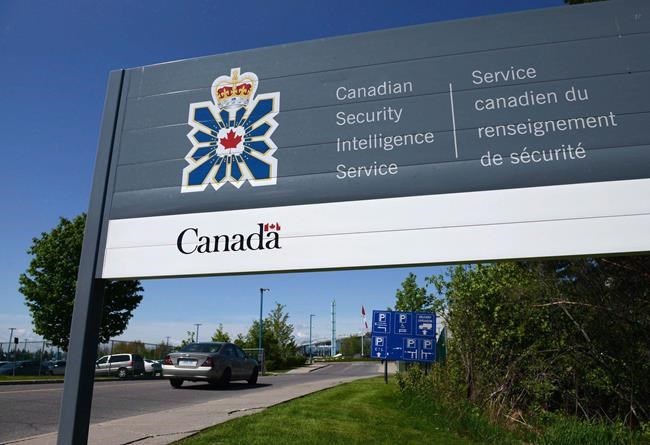 OTTAWA — A newly released audit report shows that difficulties with the judicial warrant process at Canada's spy agency — an issue that made headlines last summer — stretch back at least nine years.

Among the shortcomings were insufficient training of personnel and a lack of quality-control measures.

In underscoring the importance of the process, the report notes warrants are authorizations issued by a federal judge that enable CSIS to legally undertake actions, including surveilling people electronically, that would otherwise be illegal.

"Failure to properly apply or interpret a warrant at the time of its execution exposes the Service to the risk of its employees committing unlawful actions, and in certain situations, criminal offences," the report says.

"The investigative powers outlined in warrants must be exercised rigorously, consistently and effectively."

Potential misuse of these powers could result in serious ethical, legal or reputational consequences that might compromise the intelligence service's integrity, the report adds.

The Canadian Press requested the 2012 audit under the Access to Information Act shortly after its completion, but CSIS withheld much of the content.

The news agency filed a complaint through the federal information commissioner's office in July 2013, beginning a process that led to disclosure of a substantial portion of the document more than seven years later.

"Seeing a report like this, it just raises a concern ... to what degree they're really following that framework with the most rigour possible."

CSIS can apply to the Federal Court for a warrant when intrusive collection techniques are needed because other methods have failed or are unlikely to succeed.

Once a judge approves a warrant but before it is executed, a step known as the invocation process takes place. It involves a request from CSIS personnel to use one or more of the authorized powers and a review of the facts underpinning the warrant to ensure appropriate measures are employed against the correct people.

However, the reviewers found CSIS policy did not "clearly define or document the objectives or requirements of the invocation process."

"When roles and responsibilities are not documented, they may not be fully understood by those involved. As a result, elements of the process may not be performed, or be performed by people who do not have sufficient knowledge or expertise to do so."

Overall, the report found the invocation process "needs to be strengthened" through a clear definition of objectives, requirements and roles, and better monitoring, training and development of quality-control procedures.

In response, CSIS management spelled out a series of planned improvements for the auditors.

But concerns have persisted about the spy service's warrant procedures.

A Federal Court of Canada ruling released in July said CSIS had failed to disclose its reliance on information that was likely collected illegally in support of warrants to probe extremism.

Justice Patrick Gleeson found CSIS violated its duty of candour to the court, part of a long-standing and troubling pattern.

"The circumstances raise fundamental questions relating to respect for the rule of law, the oversight of security intelligence activities and the actions of individual decision-makers," he wrote.

Gleeson called for an in-depth look at interactions between CSIS and the federal Justice Department to fully identify systemic, governance and cultural shortcomings and failures.

The National Security and Intelligence Review Agency, the key watchdog over CSIS, is examining the issues.

Another review, completed early last year by former deputy minister of justice Morris Rosenberg, called for improvements, including better training and clarification of roles, but stressed they would not succeed unless the "cultural issues around warrants" were addressed.

The Rosenberg review prompted CSIS to launch an effort last year to further the service's ability to meet its duty of candour to the court, resulting in a plan that was finalized in January, Townsend said.

"The plan includes specific action items directed at ensuring the warrant process is more responsive to operational needs, documenting the full intelligence picture to facilitate duty of candour and ensuring CSIS meets expectations set by the Federal Court," he said.

"In addition to training on CSIS's duty of candour already provided under the auspices of the project, additional training on a variety of operational issues including warrant acquisition will be developed by the project team and offered to employees."

This report by The Canadian Press was first published March 6, 2021.