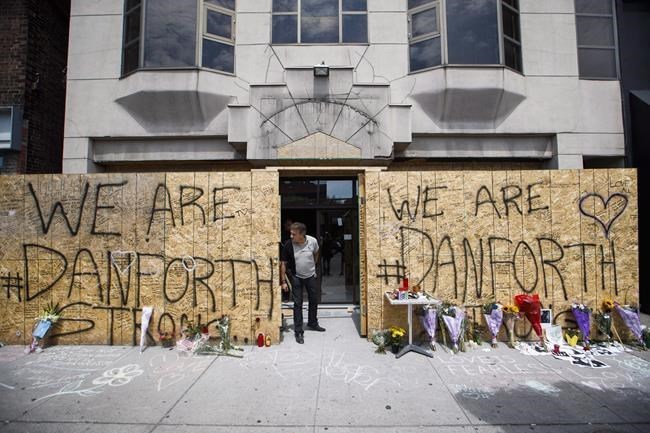 The Danforth Families for Safe Communities advocacy group as well as other families affected by gun violence sent a letter to Public Safety Minister Bill Blair outlining their disappointment as the national Liberal convention gets underway this week.

The group of victims and families affected by Toronto's Greektown mass shooting that left two dead and 13 hurt say the government's plan to allow municipalities to ban handguns should be scrapped and replaced with a federal law banning handguns outright.

"The handgun piece is just a disaster, it's an abdication of their responsibilities," said Ken Price, whose daughter, Samantha, was injured after being shot on July 22, 2018 by a young man on a rampage.

Bill C-21 would give municipalities discretion to ban handguns, if they choose, through bylaws restricting their possession, storage and transportation.

It also proposes a buyback of many recently banned firearms that the government deems to be assault-style weapons, but owners would be allowed to keep them under strict conditions.

While the group applauded the federal government for banning military-style rifles, it slammed the optional "buyback" program.

"You must do better," the families wrote to Blair.

The rate of violent gun offences increased for a fifth straight year in 2019, according to a 2020 Statistics Canada report.

In Toronto, the number of people killed or injured by guns has increased significantly since 2015, when the Liberals came to power. That year, 24 people died after being shot and 126 people were injured after 288 total shootings.

Those who wrote to Blair also criticized a proposed "red flag" portion of the legislation that would allow residents to seek a court order to have someone's guns seized if they think that person is a threat to public safety. The idea is to help women facing domestic violence, or families of those who are suicidal.

Her daughter, Lindsay Wilson, was shot and killed by her ex-boyfriend, who then killed himself in 2013 in Bracebridge, Ont.

"I'm a diehard Liberal but I see this bill as toothless and cowardly," she said.

Irons played an instrumental role in a different piece of gun-reform legislation – Bill C-71 – part of which would allow a background check on a gun-buyer's entire life. Currently, background checks are limited to the past five years.

While that bill has been enacted, it hasn't been fully implemented, including the extended background check provision, Irons said.

"My daughter's killer had a criminal record or personal violence that he hid from her," she said.

He had been convicted of forcible confinement and an assault related to a drug deal, Irons said, and received two years probation. The man then applied for his gun license and received it, she said.

"It's an appalling example of how the system is failing Canadians," Irons said.

The group said they will fight the Liberal government on the issue, especially if an election is called this year.

Mary-Liz Power, a spokeswoman for Blair, said the Liberal government seeks to end gun violence in the country.

"We have taken the strongest and most extensive action to end gun violence that our country has ever seen," Power said.

She said "significant elements" of Bill C-71 will be implemented this summer.

Power also said if Bill C-21 is passed, owners of prohibited weapons would need a license and enhanced storage requirements.

"These measures will give our government information about where these prohibited weapons are, and who has them; information that will ensure our buyback program is effective in retrieving these weapons that are too dangerous for our communities," Power said.

"The federal government would like to thank the members of Danforth Families for Safe Communities for their advocacy, and their commitment to a future free from gun violence."

This report by The Canadian Press was first published April 8, 2021.