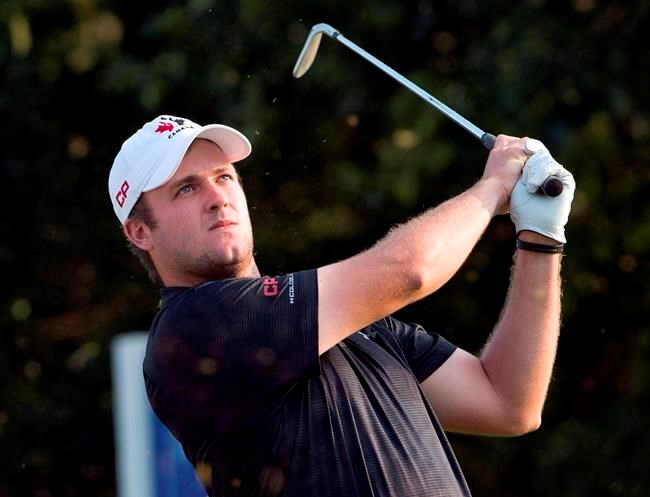 Taylor Pendrith hopes fans will watch him tee off on Thursday at Winged Foot Golf Club in the first round of the U.S. Open. Not just because it's his major debut — but because it's in the tee box where the Canadian excels.

"My driver's always been my strength," said Pendrith. "It's in my comfort zone. I like hitting driver and when it's on, it's usually long and straight. That's the best part of my game."

Pendrith, from Richmond Hill, Ont., averaged 323 yards per drive over the 2020 Korn Ferry Tour season. That would have made him the longest-driving player on the PGA Tour in the same period, besting Bryson DeChambeau (310.4 yards per drive).

It also would have put him ahead of other PGA Tour players known for their booming tee shots like Rory McIlroy (303.4) and world No. 1 Dustin Johnson (301.5).

Pendrith played nine holes at Winged Foot on Monday with caddie Mitch Theoret, then was back on the course Tuesday for a practice round with Mackenzie Hughes, Corey Conners and Adam Hadwin, the other Canadians at the U.S. Open.

After seeing all that Winged Foot has to offer, Pendrith said he thinks the course will play to his strengths.

"I'm looking forward to seeing how hard it's going to play," said Pendrith. "I think the U.S. Opens are generally setup very difficult and the green complexes out here are crazy.

"I know the history here and over par scores have won here every year, maybe. It's a really good test of golf and you have to be on with all parts of your game and I think the mental game is going to play a really big part too."

Pendrith qualified for the U.S. Open by being ranked in the top five of the second-tier Korn Ferry Tour through Aug. 9. He's currently ranked No. 3 on that tour, thanks to his remarkably consistent play since the golf season resumed in June.

Pendrith said that he and Theoret talk about "anything but golf" between shots and that he hopes to stay grounded at Winged Foot, despite the magnitude of the event.

"I'm going to try and not get sucked in by all the hype," said Pendrith. "I know it's one of the biggest tournaments in the world and all that but I'm just going to try and treat it as a normal week.

"My game feels really good right now, I've been playing some nice golf, so there's no reason why I can't play well here."

Hughes, Hadwin, and Conners will play together on Thursday and Friday, while Pendrith is grouped with American Richy Werenski and Italy's Renato Paratore.

CHAMPIONS TOUR — Calgary's Stephen Ames and Mike Weir of Brights Grove, Ont., will be in the field at the PURE Insurance Championship on Friday. The event will be held at Pebble Beach Golf Links in Monterey Peninsula, Calif.

LPGA TOUR — Brooke Henderson of Smiths Falls, Ont, withdrew from the LPGA Tour's Cambia Portland Classic on Monday due to poor air quality. Smoke from wildfires raging through California, Oregon and Washington has been affecting air quality throughout the Pacific northwest. Hamilton's Alena Sharp and Calgary's Jaclyn Lee will tee off on Friday, with the tournament shortened to 54 holes.

Tampa's Steven Stamkos returns, Lightning beat Dallas 5-2 in Stanley Cup final
Sep 23, 2020 10:07 PM
Comments
We welcome your feedback and encourage you to share your thoughts. We ask that you be respectful of others and their points of view, refrain from personal attacks and stay on topic. To learn about our commenting policies and how we moderate, please read our Community Guidelines.