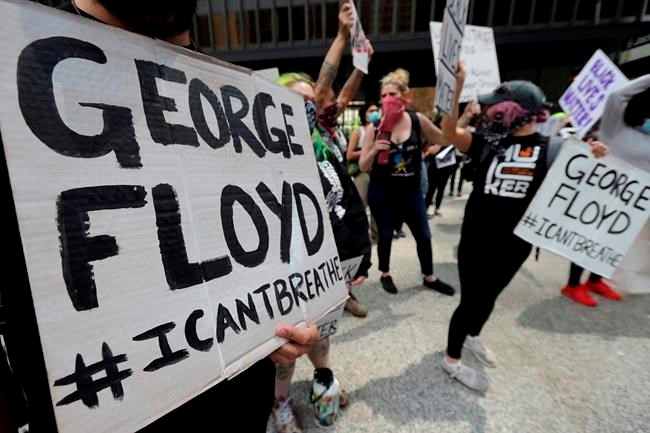 NEW YORK — NFL Commissioner Roger Goodell says “there remains an urgent need for action” following the death of George Floyd in Minneapolis and the protests around the country that have followed.

From New York to Los Angeles and several cities in between, thousands protested Floyd’s death and repeated police killings of black men. Floyd was a handcuffed black man who died Monday after a Minneapolis police officer pressed his knee into his neck for several minutes even after he stopped moving and pleading for air.

Floyd’s death and the ensuing protests have prompted many sports figures — including athletes, coaches and league officials -- to speak out in recent days.

“As current events dramatically underscore, there remains much more to do as a country and as a league,” Goodell said in his statement Saturday. “These tragedies inform the NFL’s commitment and our ongoing efforts. There remains an urgent need for action. We recognize the power of our platform in communities and as part of the fabric of American society.

“We embrace that responsibility and are committed to continuing the important work to address these systemic issues together with our players, clubs and partners.”

Goodell added that the protesters reactions “reflect the pain, anger and frustration that so many of us feel.” He also sent condolences to Floyd’s family -- as well as those of Breonna Taylor in Louisville, and Ahmaud Arbery in Georgia. Taylor, a 26-year-old EMT, was shot eight times by narcotics detectives who knocked down her front door on March 13. Arbery, who was the cousin of Detroit Lions safety Tracy Walker, was a 25-year-old black man who was shot dead after being pursued by two white men while running in their .

NFL Players Association executive director DeMaurice Smith sent a letter to all of the league's players Saturday, addressing the events around the country.

“The country is hurting, there is uncertainty and there is danger,” Smith wrote. "It is also clear that the pain, while shared by so many, has a history of being (borne) more by some than others. It is as wrong to be ignorant to this pain as it is to use this pain as cover for inflicting pain on others.”

NFLPA president JC Tretter of the Cleveland Browns also wrote a statement on Twitter, saying he felt “a range of emotions” this week.

“Racism is something that we all must take responsibility to end,” Tretter wrote. “As human beings, we need to identify and challenge prejudice, rather than deny it. Silence in the face of injustice only works to protect and perpetuate that injustice.”

"As an organization and a community, we come from all over the world. We are diverse. We speak different languages. But our shared humanity unites us. When we see racism and violence committed against someone because of the colour of their skin, we should, and do, feel outrage. We cannot accept this. While we grieve for those we have lost, we know grieving is not enough. We must honour their memory by acknowledging these ills exist, confronting them, and coming together to create a better society. It is far past time.

“Fifty-four years ago, I was an 8-year-old boy living in rural Kentucky when the schools were desegregated,” Casey said. “I walked into a white school where I was not wanted nor welcomed. At that time, there were no to record my treatment, no cable news stations with 24/7 coverage, no social media to record the reality of the situation or offer support nor condemnation. But I can remember exactly how I felt as an 8-year-old child. I felt helpless. I felt as if I was neither seen, nor heard, nor understood. As I have watched the events unfold in the days following the murder of George Floyd in Minneapolis, a city where I coached and once called home, I see how many people continue to feel those same feelings -- helpless, frustrated, invisible, angry. I understand the outrage because it seems the list continues to grow: Ahmaud Arbery, Breonna Taylor, George Floyd. The injustices continue to mount and nothing seems to be changing.

“Fifty-four years later, my son is now 8 years old and I look at the world he is growing up in and wonder, how much has really changed? How often is he judged on sight? Is he growing up in a world where he is seen, and heard, and understood? Does he feel helpless? Will he be treated like George Floyd or Ahmaud Abrey? What have we really done in the last 54 years to make his 8-year-old world better than mine was? We all have to be and do better.”

The midfielder had the handwritten message “Justice for George” on white tape around his left arm.

“To be able to use my platform to bring attention to a problem that has been going on to long feels good!!!” McKennie wrote on Twitter alongside pictures of himself wearing the armband. “We have to stand up for what we believe in and I believe that it is time that we are heard!”

Blue Jays manager Montoyo says first-round pick Martin to join camp
Jul 9, 2020 2:25 PM
Big Ten to limit football, fall sports to conference games
Jul 9, 2020 2:17 PM
Nashville forced to withdraw from MLS is Back Tournament due to COVID-19 results
Jul 9, 2020 2:02 PM
Comments
We welcome your feedback and encourage you to share your thoughts. We ask that you be respectful of others and their points of view, refrain from personal attacks and stay on topic. To learn about our commenting policies and how we moderate, please read our Community Guidelines.