Julien energized by Canadiens' busy off-season: 'I expect us to make the playoffs' 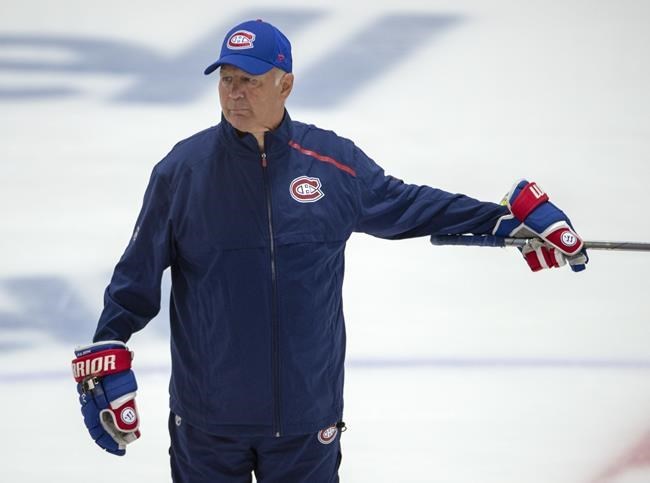 Claude Julien glanced down at some notes towards the end of his nearly hour-long video conference call with reporters Thursday.

The Montreal Canadiens head coach was promptly asked — tongue firmly planted in cheek — if what was in front of him included the team's roster, and if so, if he felt like sharing his line combinations and defence pairings.

"It'll change tomorrow," Julien, without revealing anything, shot back with a grin.

After a busy off-season loaded with significant moves, he wasn't joking.

"It's pretty exciting," Julien said. "A lot of different things we had looked at to improve our team has been taken care of."

At the other end of the spectrum, there's youngsters like centres Nick Suzuki and Jesperi Kotkaniemi, who both fully introduced themselves to the rest of the NHL with standout performances during the league's summer restart, and incoming Russian defenceman Alexander Romanov.

Securing a capable No. 2 option behind Price to lighten the future Hall of Famer's workload was crucial in Julien's eyes, but so was adding more skill, size and muscle on the back end and up front with Edmundson and Anderson, and scoring prowess in Toffoli, a former 30-goal man.

"I really like everything (general manager Marc Bergevin) has done," Julien added. "He's given us an opportunity to be real competitive."

But with that comes heightened expectations for a team handed a lifeline as the 24th of 24 entrants included in the resumption of the league's pandemic-delayed 2019-20 campaign.

The injury-hit Canadiens were playing out the string when the schedule was halted because of COVID-19 in March, but showed what that version of the group could do when healthy by upsetting the Pittsburgh Penguins in the August qualifiers before forcing the Philadelphia Flyers to six games in a gritty, sometimes-nasty first-round series.

Instead of simply hoping to qualify for the post-season, the bar has been raised significantly.

"Now if by mid-season, I've lost half my team to injuries, I guess those things change. But other than that, we should definitely be a competitive team that should be able to make the playoffs."

The 60-year-old Julien, who was rushed to hospital in Toronto following Game 1 against the Flyers and subsequently had a stent inserted into one of his coronary arteries, is feeling good and looking forward to figuring out where all the puzzle pieces fit on a roster that all of sudden has plenty depth.

One forward no longer in the mix is Max Domi, who was dealt to the Columbus Blue Jackets for Anderson. After the deal, Domi suggested there was a breakdown in communication as he was demoted to Montreal's fourth line in the post-season.

Julien said Thursday his door is always open, but it's also impossible to please every player all the time. The coach added the emergence of Suzuki and Kotkaniemi meant that Domi — the team's leading scorer with 72 points in 2018-19 before slipping to 44 last season — became a trade candidate to address other needs.

"It's not so much that it didn't work out," Julien said. "Max became, I guess, a little bit expendable because we had those guys do so well. At the same time we're able to get a big player that we really needed on the wing in Josh Anderson in exchange for him, so Max was such a good player we were able to get a good player in return. That's just hockey.

"Nothing to do with personal (issues) or anything else more than trying to improve our team."

Julien, who coached the tough, physical Boston Bruins to a Stanley Cup victory in 2011 before making the final again in 2013, said Montreal's overall improvements give him options he didn't have previously.

"That's the beauty of it," Julien said. "I like the fact that I can move guys around. And it's not like one line is going to get better and the other one's going to get weaker. If I make a change, probably all lines will have an opportunity to get better."

But by getting better as a team and setting a minimum requirement for success, the temperature in a hockey-mad market where he's on his second tour behind the bench is certain to rise dramatically.

"Pressure is what you make of it," Julien said. "I don't look at it as pressure, but as an opportunity. We should be good enough to make the playoffs.

"And we should thrive on the opportunity."

This report by The Canadian Press was first published Oct. 22, 2020.

Toronto FC, Black Players for Change team up to help kids access sports
Nov 23, 2020 3:35 PM
Comments
We welcome your feedback and encourage you to share your thoughts. We ask that you be respectful of others and their points of view, refrain from personal attacks and stay on topic. To learn about our commenting policies and how we moderate, please read our Community Guidelines.