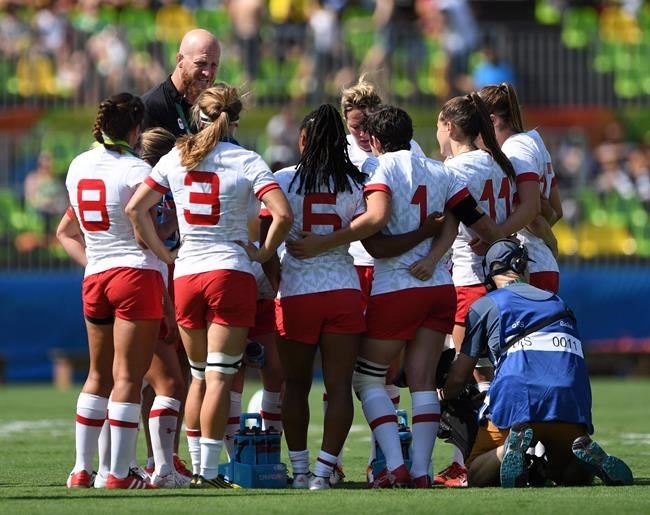 The investigation into a complaint from members of the Canadian women's rugby sevens team has been completed.

But Rugby Canada says it is "still in the process of sharing the confidential findings with the involved parties."

A spokesman said Rugby Canada expects to "be in a position to issue a statement shortly."

Rugby Canada disclosed the complaint in early February, saying it had called in an independent investigator and revamped the team coaching staff.

The sevens side is coached by John Tait, a former Canadian international who serves as Rugby Canada's director of women's high performance. The 47-year-old coached the sevens women to a bronze medal at the 2016 Rio Olympics and gold at the 2015 Pan-American Games.

In a five-paragraph release Feb. 5, Rugby Canada did not name Tait, say who was the subject of the investigation or specify the complaint. But Tait did not figure in the new-look coaching setup.

Vansen said he could not provide further details about the complaint other than to say: "I can certainly share that the complaints are from multiple individuals.''

Tait, in a text to The Canadian Press when the complaint was disclosed, said he could not comment but hoped to be able to speak on the matter in the coming weeks.

Tait, an imposing figure at six foot eight, won 37 caps for Canada from 1997 to 2002. He played professionally in Wales with Cardiff and France with CA Brive.

He has been a coaching constant at Rugby Canada for more than a decade, having served as an assistant coach with the men's 15s team and head coach of the women's 15s team prior to taking over the sevens women. Last August, the father of three was given additional responsibilities, handed the high-performance role on the women's side in addition to his sevens head coaching duties.

Team captain Ghislaine Landry confirmed that the complaint was made by members of the team but declined further comment.

In the original statement, Vansen said: "Rugby Canada is taking these concerns very seriously. We are following our internal policies and procedures that are in alignment with established national response guidelines, and in a manner that reflects our values.''

Mick Byrne, a specialist coach with both New Zealand and Australia who has consulted remotely with the Canadian sevens side since 2012, was appointed interim head coach.

The Canadian women are currently training in Dubai, where they won one invitational event and finished runner-up in another recently.

The Olympic rugby sevens competition is scheduled for July 26-31 in Tokyo with the Canadian women a medal threat. They were third in the HSBC World Rugby Sevens Series standings when the season shut down after five events last year, having finished runner-up at three events and third at a fourth.

Canada was third overall the previous season, lifting the trophy at the Kitakyushu Sevens in Japan in April 2019. It marked the first cup win for the Canadian women since 2017.

This report by The Canadian Press was first published April 16, 2021