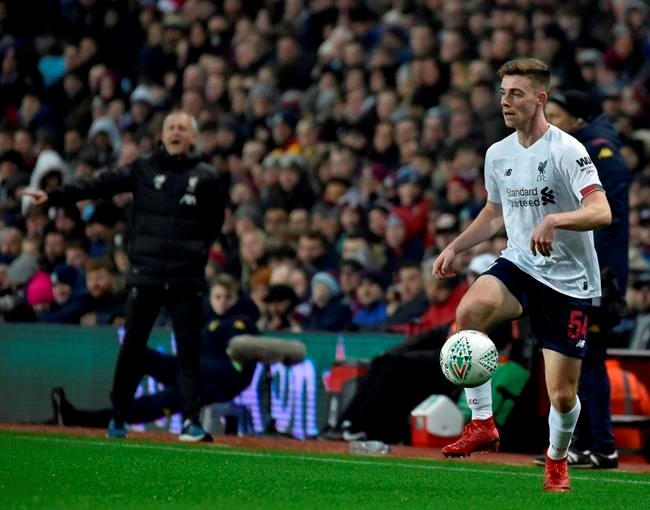 The Scottish youth international left back arrives on loan from Liverpool where world-class fullbacks are stacked like logs outside a winter cabin.

"I've come to play first-team men's football, for my career to kick on," the 21-year-old Gallacher told reporters Wednesday. "I want to work hard, show what I can do.

"At Liverpool in the under-23s, you can show how good you are in the games but when it comes to first-team football, it's a massive step up."

English champion Liverpool is brimming with talent at the fullback position with 26-year-old Scottish international Andy Robertson on the left and 21-year-old English international Trent Alexander-Arnold on the right.

Asked the best advice he had got from Liverpool manager Juergen Klopp, Gallacher said he had yet to speak to the first-team boss although he has trained with the first team.

Gallacher made his senior debut for the Reds in a 5-0 loss at Aston Villa last December in the Carabao Cup quarterfinal. Liverpool fielded a young squad under Neil Critchley, with the first team in Qatar at the FIFA Club World Cup.

Toronto was only too happy to take on the Glasgow native. The MLS team is thin when it comes to specialist fullbacks with veteran Justin Morrow, Brazil's Auro and Canadian Richie Laryea looking after two positions.

"We've seen him. He's grown up as a left back. He understands the position," Vanney said. "He's very comfortable in his role and understanding. Obviously having come from Liverpool, he has a good idea of what it will take for him to be successful with us.

"He's a good passer out of the position, he's a good defender. He understands his reads and decision-making on the defensive side. And he gets himself into the attack. He doesn't fly up and down (the wing) like Richie per se but he can join into the attack and he's a quality crosser."

Gallacher says TFC's style of play under Vanney is very similar to that of Liverpool —positive attacking football.

"(He) plays football the right way, if you can say that ... So for me, in training, it's just what I usually do," he said. "I don't need to change the way I play, I don't need to adapt too much to what I've been asked to do."

Vanney said Toronto has an option to keep Gallacher after the season.

Liverpool acquired Gallacher in January 2018 from Scotland's Falkirk for a reported fee of 200,000 pounds ($341,695). He made his senior debut for the Scottish Championship club in November 2015 at the age of 16, becoming a first-team regular at 18.

Gallacher will wear No. 6, which once belonged to Nick Hagglund, Gale Agbossoumonde, Julian de Guzman and Maurice Edu. He says numbers mean little to him, although his preference would have been No. 3 — the traditional left back number — which currently belongs to centre back Eriq Zavaleta.

Gallacher has also played right back and can occupy centre back in a pinch but says the left flank is his preferred position.

The five-foot-10 156-pounder got a scouting report on Toronto from Liverpool under-23 teammate Liam Millar, a Canadian international.

"Too bad I won't got to see much of it with the travel we're going to do," said Gallacher, who had to undergo a 14-day quarantine after landing here.

It's his first trip to North America.

Canadian Bianca Andreescu will not play in French Open tournament
Sep 19, 2020 4:30 PM
Windsor's T.J. (The Truth) Laramie loses UFC debut via first-round submission
Sep 19, 2020 4:26 PM
Disjointed and overrun, Man Utd slumps to loss on EPL return
Sep 19, 2020 4:22 PM
Comments
We welcome your feedback and encourage you to share your thoughts. We ask that you be respectful of others and their points of view, refrain from personal attacks and stay on topic. To learn about our commenting policies and how we moderate, please read our Community Guidelines.