The Spring League in U.S. interested in forming partnership with CFL 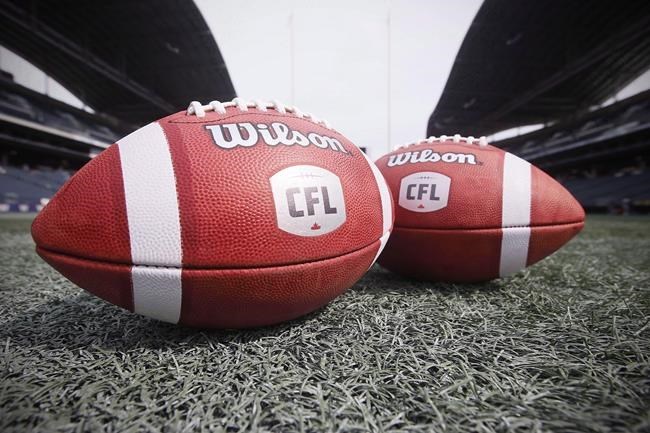 Brian Woods, the CEO of The Spring League, has approached Ambrosie about a partnership. Woods is offering an opportunity for some CFL teams to practise with and play against Spring League squads in September in a condensed format he says has proven beneficial to his operation.

"I think there could be an interesting opportunity here because it's not sounding good for the summer or fall season up there," Woods said. "The Spring League has been here since 2017 and many of our players have made it on to CFL teams and in some instances been very productive.

"It's absolutely of great importance to us that the CFL stays in operation."

These are troubled times for the CFL. Ambrosie said Wednesday a best-case scenario for the league is opening an abbreviated season in September due to the COVID-19 pandemic.

But a cancelled 2020 campaign also remains a definite possibility.

Ambrosie has approached the Canadian government for assistance. The league's three-part proposal includes $30 million immediately, more monies for an abbreviated season and up to an additional $120 million in the event of a cancelled campaign.

The Spring League is a developmental football operation. It consists of four teams — with 38 players on each roster — that practise jointly and play games at one facility.

"It's not many games but it's enough for players to get current film," Woods said. "Most NFL teams, even CFL teams, that's all they're looking for, they want to see players in two games to kind of really evaluate them and get a good feel for it.

"We've had to find a model that would work financially so we could sustain ourselves. We reached profitability last year and expect to have another profitable year (in 2020)."

Players aren't paid but are housed in hotels and fed during the season.

"Ultimately they receive an opportunity," Woods said. "We've taken guys who've been on NFL practice squads the year before and are coming off injury.

"Getting into The Spring League was important for them to show, 'Hey I've rehabilitated, I'm healthy, I can play and I'm full go.' It's been quite valuable to NFL teams, and even CFL teams for that matter."

The Spring League held an abbreviated '20 season that began with one of its teams playing an exhibition game in Dallas against a Japanese squad. Then all four clubs convened for three weeks in Las Vegas.

Woods' proposal calls for between two and four CFL teams combining with Spring League squads at an unspecified U.S. location for three-to-four weeks. Woods is amenable to adopting Canadian rules and playing on longer, wider fields like squads in Canada do.

"We'd be completely amenable to utilize most, if not all, CFL rules and we could absolutely incorporate the CFL guidelines as it relates to the field specifications."

Ambrosie hasn't formally spoken to Woods but said they've exchanged emails. While the CFL hasn't closed the door on a 2020 season, Ambrosie is keeping all of his options open.

"I'm trying to keep an open mind to everything," he said. "The one quality of this job is try to make friends, build relationships and explore all options.

"I think what our governors want me to do is find a bigger, brighter future for this league. That means you've got to be open to new thoughts."

Woods hopes to speak with Ambrosie, "sooner than later."

"I think this is something that requires some planning even though we've got our infrastructure in place," Woods said. "We're better equipped to deal with the current health crisis probably more so than the traditional, bigger sports entities in the U.S. because we operate out of one location.

"We're not in multiple cities, we're not going to need to bus into different markets, we don't need air travel. We wouldn't need much time to get this up and running but certainly for planning purposes and finding an agreeable structure, I think it would be prudent to have conversations as soon as possible."

Woods said playing games with no fans wouldn't be an issue, as The Spring League did so in Las Vegas.

Woods said the two entities would operate independently. CFL teams would abide by the league's CBA, meaning this idea would also require acceptance by the CFL Players' Association.

A source told The Canadian Press a CFL/The Spring League partnership hasn't been discussed by the league and CFLPA. The source was granted anonymity because the CFL hasn't commented publicly about the issue.

Like the CFL, The Spring League is looking at international expansion as early as next year.

"We're hoping to have a team from Japan and maybe a team from either Mexico or Germany take part next year," Woods said.

Woods believes TSN — the CFL's broadcast partner — could be part of the project.

"I believe it's doable and I think there could be a monetary play here with TSN potentially even if it's a limited number of games," he said. "And this isn't foreign because there was a time when CFL teams operated in the U.S.

"I think Canada needs football . . . I think it's important the CFL does something this year and is visible to some extent. Otherwise I fear for what could be ahead or what might not be ahead."

This report by The Canadian Press was first published May 22, 2020.