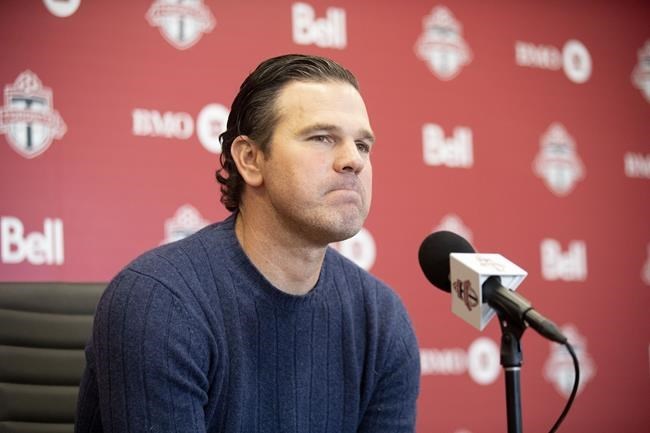 TORONTO — Coach Greg Vanney knows all too well what he is leaving behind when Toronto FC heads south of the border this week to resume Major League Soccer play.

His wife and their four children.

Not to mention a packed schedule that despite COVID-19 features gymnastics for their 16-year-old daughter and soccer for their three sons — 12-year-old twins and a nine-year-old. Or the commute to their assorted schools.

"We're trying to figure how she's going to accomplish all of that with me pretty much being unavailable for the next eight weeks," said the 46-year-old Vanney. "The impact on just daily life on her is enormous. On me, it's more obviously emotional and not being able to be there or to help her or to see the kids and all that kind of stuff.

"We can manage that. But to be in multiple places at one time is going to be a real challenge for her that we have to find solutions for. We've done that in the past. This is just going to be another one of those moments. But it's a much bigger burden on her than me, that's for sure."

Vanney was quick to point out his players and others at the club face similar situations. Because of their age, many have young families.

"That's the hard part in all of this," he continued. "Our guys all have to figure out how to manage their own personal situations and the club is great at trying to help that. But there are always circumstances that are there that are challenging."

With border restrictions in place due to the pandemic, all three Canadian MLS teams will be playing in the U.S. for the near future. While the league has only announced three games per team in the next round of the schedule, Toronto, Montreal and Vancouver may have to finish out the campaign away from home.

Toronto has already chosen East Hartford, Conn., as its hub while the Whitecaps will make Portland their base. The Impact, who concluded the all-Canadian stretch of the schedule in Vancouver on Wednesday, have not detailed their itinerary but two of their next three games are at Red Bull Arena in Harrison, N.J.

The hope is they all might come home for a few days after that run — spent under quarantine with family — before returning south for the next stretch of play.

Toronto leaves Friday for Washington in advance of Saturday's game against D.C. United. The team will then head to East Hartford in advance of a Sept. 23 match with New York City FC at Red Bull Arena before returning to Connecticut to "host" Columbus Crew SC on Sept. 27.

"In an ideal world, we won't have to be on the road for eight straight weeks. But I think a lot of details there still have to be worked out," Vanney said. "We'll have a better solution hopefully before we get on the road here in the next few days."

It's a season — and year — unlike any other.

And on the sporting front, the Canadian MLS teams face different challenges.

"So for sure, it's different ... far more variables for our team, the Canadian teams, than the other teams."

TFC will do its best to ease the demands of those left back home. During the MLS is Back Tournament in Florida, the club helped fly in relatives to help ease the load on spouses and partners.

French-born goalkeeper Quentin Westberg's mother came to town, followed by his Portuguese wife's parents. The help was appreciated given the couple have four kids aged nine and younger, including a baby.

But leaving Canada involves more than saying goodbye to loved ones. It means departing the relative safety of Canada, whose COVID numbers are far better than south of the border.

"I think obviously in Canada, and in Toronto specifically, ... the government response and the people's response (to the pandemic) has been far better than anything in the U.S. That's clear," said Vanney, an American.

"Our job now is that we are going into an environment that I would say is a little less safe when it comes to COVID and the health situation. We have to be even more diligent, which means we have to make personal and collective decisions that are more responsible because it's more prevalent in those areas."

At the MLS tournament in Florida, all the clubs were in a bubble that stood up after FC Dallas and Nashville SC had to leave early due to positive COVID tests.

Vanney said his team will do its best to create its own bubble on the road. Charter flights help, as will a hotel where the players will be isolated. Players will be tested every other day or daily, depending on the game schedule.

The team is also trying to create safe spaces and activities for the players in East Hartford.

"Guys can't be just out floating around and doing things that don't make sense," said Vanney.

The hope is that the COVID situation will improve, allowing for games back home at some point this season.

"But I think we all understand that that's probably not going to happen," said Vanney.

Tampa's Steven Stamkos returns, Lightning beat Dallas 5-2 in Stanley Cup final
Sep 23, 2020 10:07 PM
Comments
We welcome your feedback and encourage you to share your thoughts. We ask that you be respectful of others and their points of view, refrain from personal attacks and stay on topic. To learn about our commenting policies and how we moderate, please read our Community Guidelines.