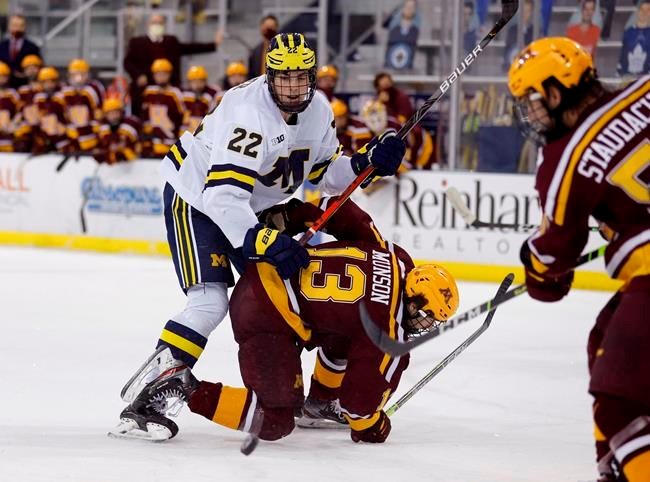 Now the No. 1-ranked North American skater is set to miss out on a normal NHL entry draft experience, too.

Power, a six-foot-six, 213-pound defenceman from Mississauga, Ont., is expected to be the top pick when the league's draft is held virtually for the second year in a row on Friday.

The Buffalo Sabres have the first selection, followed by the upstart Seattle Kraken, who'll be making the first pick in club history. The Vancouver Canucks will be the first Canadian team on the board, choosing ninth.

Power believes he has what it takes to be drafted first overall, but he hasn't committed to making the leap to professional hockey next season. After an unusual first year at the University of Michigan, the 18-year-old said he's considering going back to school in the fall instead.

"I think that’s probably one of the big parts of why I want to go back to school, to just be able to experience the true college experience, especially at Michigan with the fans there," Power said. "Playing in front of them, I think would be pretty special. Just actually going to class and not doing it online, just being able to do stuff other than go to the rink and home I think would be something that I would like to do."

He was selected to the Canadian national team for the men's world hockey championships in May and turned heads with three assists in eight games en route to Canada's gold medal win.

"I think the world championships was good for me to kind of see where I was at when playing with pros or playing against pros. So I think it gave me a bit of a better idea of how ready I was to play pro hockey," he said.

Trent Mann, chief scout for the Ottawa Senators, felt bad for the young players and their lost opportunities.

"But that’s their reality as well. For us, it just makes the job that much harder. The reality is that right now, there are players that have not played a game … since February of 2019," said Mann, who's team holds the 10th overall pick in this year's draft.

The Calgary Flames will pick 13th, the Winnipeg Jets have the No. 18 selection, the Edmonton Oilers are slated to choose 20th and the Montreal Canadiens will go second-last on Friday with the 31st pick.

The Toronto Maple Leafs dealt their first-round selection to the Columbus Blue Jackets in April for forward Nick Foligno and won't pick until midway through the second-round on Saturday.

Mann said Ottawa is better prepared for a virtual draft after going through the process for the 2020 iteration in October. The group knows what to expect this time around, he said, like the complications involved in making a trade.

"There’s not as much time," he said. "(General manager) Pierre (Dorion) can’t walk over to the table and get something done that quickly. It just doesn’t work that way. I think there’s some little intricacies of the day itself that we’ll be able to improve upon because we’ve been through it."

The Sens' scouts have used a number of different tools over the past year, including video, analytics and scouting reports, but they can't replace the experience of watching a player live or meeting with them face-to-face, Mann said.

"That’s the piece that’s just the scary part about it all is just that if you don’t see it, it’s just a little bit more of a gamble, I guess," he said. "And we have to live with that. But it doesn’t make you feel any better, to be quite honest."

Players have been adapting, too. When news spread that some North American leagues were cancelling or condensing their seasons, some athletes looked overseas for opportunities to hone their skills.

Othmann felt for his OHL teammates, though, knowing many weren't able to secure similar opportunities.

"I had lots of buddies I played with and played against, and they can't showcase themselves. That's just disappointing for them and for me to hear that," he said. "We've worked our whole lives to get drafted in the National Hockey League. … I wish some of my other peers got to play the game and showcase themselves a little bit more."

For one prospect in this year's draft class, the pandemic presented a unique opportunity to learn from some of the game's up-and-coming stars.

Luke Hughes' older brothers came back to their family's home during quarantine, providing ample time for the budding defenceman to pick their brains on making the most of the entry draft process.

Jack Hughes was picked first overall by the New Jersey Devils in 2019 and the Vancouver Canucks selected Quinn Hughes seventh in 2018.

"I think quarantine was unbelievable for me to just hang out with my brothers. Jack was at my house for like, nine months," Luke Hughes said. "Just to spend that time with him, we probably won’t have that time together as a family ever again, so that was awesome, just to train with them in the summer, live with them and watch hockey together. So that was awesome."

The youngest Hughes brother enters the draft as the No. 4-ranked North American skater after spending last season with the U.S. National Team Development Program. A six-foot-two, 184-pound blueliner, Hughes plans on playing at the University of Michigan in the fall.

Both Quinn and Jack Hughes were drafted in person and heard their names called from the stage as applause roared around them. They each walked to the front of a packed stadium and shook hands with their new team's brass before donning a fresh jersey.

It'll be a much different experience for Luke Hughes and the other NHL prospects picked this year.

They'll gather with family and friends, watching the draft play out on TV. A phone or webcam will record reactions when their name is called. The only hugs and handshakes will come from those in the room.

While he knows his draft will be a more subdued affair, Luke Hughes has still taken some valuable advice from his brothers.

“They kind of taught me going into the year that you’ve got to be ready for everything, you’ve got to stay level minded and you can’t get too high or low going through the year," he said.

"And I think that really applies to me this year because with all the COVID implications and getting shut down and quarantine at numerous times throughout the year, I think you’ve got to stay level headed and can’t be too high or too low."

This report by The Canadian Press was first published July 22, 2021.