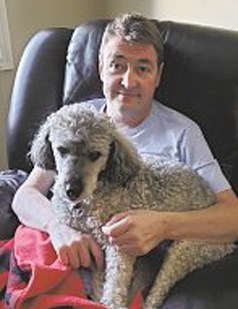 On Saturday, February 29, 2020, Richard Arthur Desilets passed away in St. Albert at the age of 53 after a lengthy battle with MS. We have lost a great husband, father, grandfather, brother, uncle and great leader.
Richard was born in Bonnyville, Alberta on November 13, 1966. He spent many rewarding years farming in Bonnyville and later moved to St. Albert where he met and married his wife of 15 years, Patricia.
They were blessed with three wonderful grandchildren and enjoyed many summers camping around Alberta. Richard is survived by his loving wife, Patricia, Dionne (Isaac), Landon; grandchildren Adalynn, Ethan & Greyson and special canine buddy Dante. Richard also leaves to mourn his brothers and sisters: Yvon (Irene), Denise (Ed), Pauline (Tracy), Lucille (Steve), Simone (Ronald), Doris (Denis), Raymond (Linda).
He is also survived by Patricia’s brothers and sister: Raymond (Colleen), Roger (Deb), Bonnie (Roy); numerous nieces and nephews.
At Richard’s request there will be a private, immediate family memorial service later in the Spring. In lieu of flowers, donations to the Stollery Children’s Hospital would be greatly appreciated.

DELISLE, Leo
May 19, 2020 8:53 AM
Comments
We welcome your feedback and encourage you to share your thoughts. We ask that you be respectful of others and their points of view, refrain from personal attacks and stay on topic. To learn about our commenting policies and how we moderate, please read our Community Guidelines.