Rob McKinley
Aug 31, 2021 5:46 PM
Previous Next
1 / 1 Like a bighorn sheep on the side of a Jasper highway, a bear in Lac La Biche drew the camera crowd. IMage Rob McKinley
Expand
Previous Next
Listen to this article
00:02:45

The bear is finally out of the tree. The nearly-five hour ordeal to safely trap a wild black bear that made its way into downtown Lac La Biche ended just before the small town's rush hour today.

At least we think it did.

Our newsroom wasn't there for the actual tuck and roll drop the bear likely made from its woody perch 30 feet above the Main Street traffic, snarled for much of the afternoon by lookey-loos and pedestrians with camera-phones pointed skyward. No. We thought it was likely a better idea to report that there was a wild animal in a tree, that trained professionals were attempting to safely trap it, and for everyone else to stay the heck out of the area.

Obviously, having a bear in town drew some curiosity. Admittedly, our newsroom did drive by the scene two more times to see if the animal was still hugging the branches in the treed lot east of the La Biche Inn. But it was a drive-by. We didn't stop to take note, look for just the right angle for the best selfie, bring our tricycle-riding kids to the spectacle, or treat the emergency police tape surrounding the scene as some sort of viewing area border that would magically become an impervious barrier of stretchy vinyl if the bear were to drop from the tree suddenly and charge for the nearest piece of fleshy idiot.

However — as we don't know for sure — since we won't talk to a Fish and Wildlife officer until later tonight or tomorrow —  we'll say that the now-empty sidewalks, back alleys and adjacent streets are a clear indication that the wild animal was safely trapped, held until the effects of some sort of tranquilizer (that may or may not have been used) wore off, and was then safely released far away from the urban action. 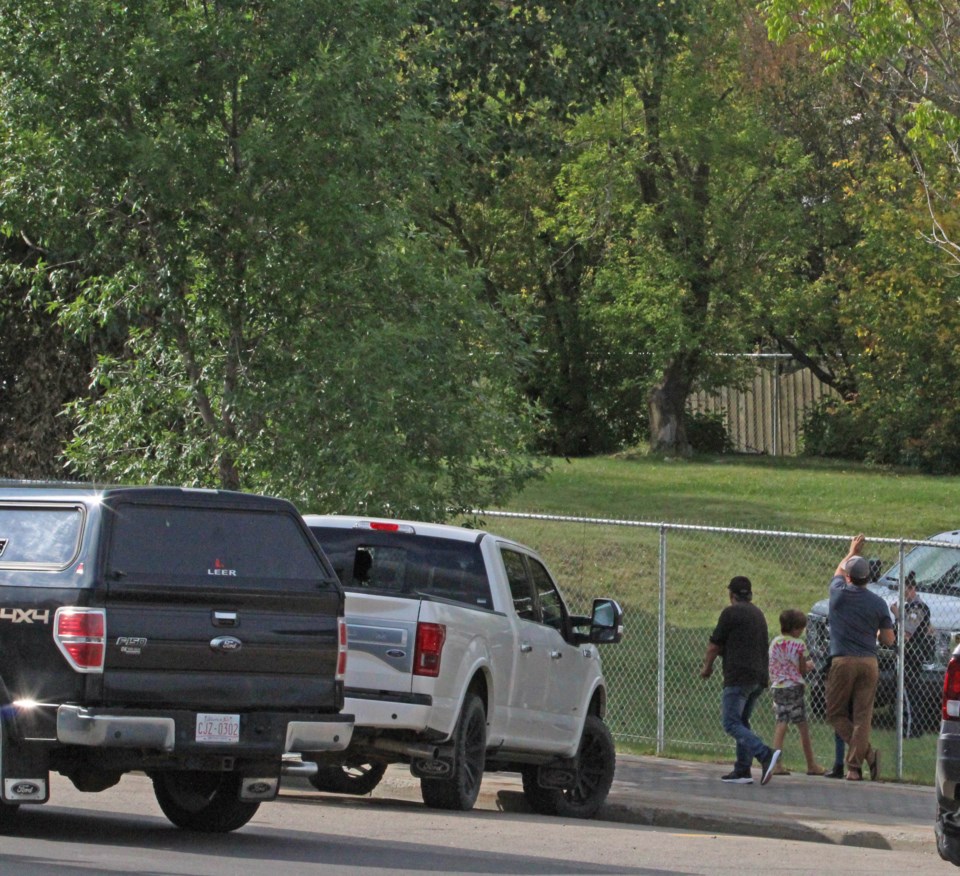 On the other side of the chain-link fence, trained professionals were hoping a bear trapped in a tree would land on their side of the fence, and not in the impromptu spectator gallery.     Image Rob McKinley.

Or... Perhaps seeing all the nice smiling faces, the upturned kind eyes, the procession of vehicles driven by enraptured motorists ... and likely more than anything else, all those wonderfully delicious children and small dogs attached loosely to their distracted adult owners ... the bear simply jumped from the tree and ate everyone.  With no one left to serve or protect, all those trained emergency professionals also left. The Fish and Wildlife folks also vacated as the once agitated and scared bear was now full and satisfied, and really wasn't an issue anymore.

Once we get some details from the Fish and Wildlife office, we'll let you know which ending is correct. One thing we do know even before we get the details .... It's. A. BEAR.   A Bear. A wild animal  — Three trees, 20 feet of distance, a chain-link fence, police tape and your Otterbox iPhone case aren't going to do much if  that wild animal decides to act wild.