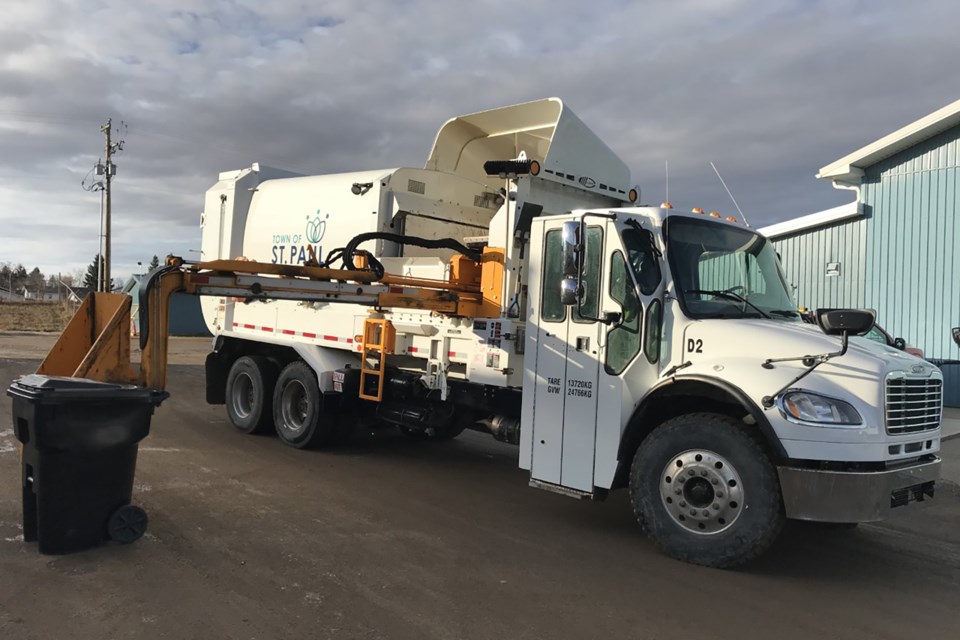 The new roll-out garbage bins, pictured to the left of the town's garbage truck, are expected to be more efficient for town staff.File photo

ST. PAUL - Residents in the Town of St. Paul can expect to receive new roll-out garbage bins soon, as the project continues to move ahead on schedule.

During the April 12 regular council meeting, a couple of discussions took place around the new bins. The first was regarding a policy that will be put together, establishing a set of rules around the new roll-out bins. Council agreed a policy is needed, following a recommendation from administration.

Director of Public Works Steven Jeffery confirmed the new waste carts would be arriving on schedule, and recommended council look at putting a policy in place around the use of the bins. Transitioning to the bins is expected to make garbage pick-up more efficient and safer for Town of St. Paul employees.

The roll-out bins are picked up by a mechanical arm on the town's garbage truck, rather than staff physically lifting garbage bags into the truck. But, the shift to roll-out bins will mean a few changes for residents. For example, only waste that fits in the bins will be picked up, and only certain materials will be allowed in the bins.

Coun. Nathan Taylor, who sits on Citizen's Advisory Waste and Recycling Committee, said there are certainly questions that need to be answered, and it's a matter of taking all the information and putting it where it should be.

A motion to proceed with a policy, with the help of the Citizen's Advisory committee, was approved by council.

The committee will meet weekly in April, and monthly after that for the rest of 2021 after the bins are delivered. The new roll-out bins are expected to be delivered to residences starting on April 21, and in the days following their arrival to St. Paul. A pamphlet will be delivered with the bins.

Questions around the Town of St. Paul's grass clipping pick-up program, which is offered to seniors and people with mobility issues in need, were also brought forward due to the introduction of roll-out garbage bins.

With the arrival of the residential waste carts expected soon, the grass clipping service may not be available in the same form, depending on the policy created and what is allowed in the new bins, heard council.

Last season, residents who qualified for the grass clipping program could purchase a sticker for $1, and leave their grass clippings out in a clear bag. The bags were then collected by the Town of St. Paul.

"Public Works is suggesting that we still provide the program to those eligible, but the clippings must be placed in 100 per cent compostable bags," said Jeffery. He also recommended the Public Works department make use of summer students to pick up the bags in the front of homes, where addresses are visible. Rather than using the garbage truck to collect the grass clippings, one of the town's other trucks would be used, which has a hoistable box for easy dumping at the transfer station.

With the compostable bags being used, the clippings could be taken to the transfer station and left in the 'yard waste section' without the bags having to be cut open, explained Jeffery. Under the new process, Jeffery says residents would buy their own compostable bags, which are available at various retail locations in town.

He figured that pick-up could be done on a specific day of the week, and would likely only take staff about half a day to tackle the job. Residents must be registered in the program to take part in it.

About 290 stickers were sold throughout last season as part of the program.

Jeffery said he doesn't want to set any sort of precedent on allowing yard waste in the new roll-out bins.

A motion to pass the item on to the Citizen's Advisory Waste and Recycling Committee was approved. The issue will then come back to council.