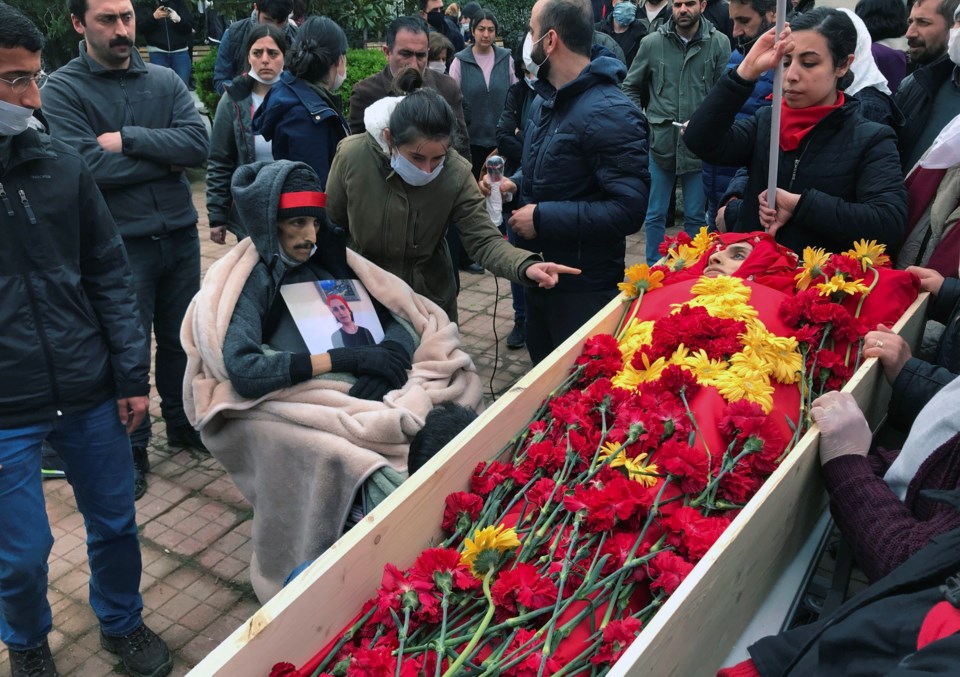 ANKARA, Turkey — A member of a popular folk music group that is banned in Turkey died on the 288th day of a hunger strike she and a colleague started while imprisoned to protest the government's treatment of their band, according to a post on the group's Twitter account.

Grup Yorum said singer Helin Bolek, 28, died Friday at a home in Istanbul where she had been staging the hunger strike in an attempt to pressure the government into reversing its position on the band and its members.

Grup Yorum, known for its protest songs, is a folk collective with rotating band members. It has been prohibited from performing in Turkey since 2016, and authorities have jailed some of its members.

The government accuses Grup Yorum of links to the outlawed Revolutionary People’s Liberation Party-Front, or DHKP/C. The militant group is designated a terrorist organization by Turkey, the United States and the European Union.

Bolek and fellow band member, Ibrahim Gokcek, had embarked on a the hunger strike while in prison to press the government to lift the ban and free detained band members. They were released in November.

The two were demanding that Grup Yorum be allowed to resume concerts, that jailed band members be released and that lawsuits against the group be dropped. Two Grup Yorum band members, including Gokcek’s wife, remain in prison.

Bolek and Gokcek were forcibly hospitalized on March 11 but discharged a week later after they refused treatment, the Ankara-based Human Rights Association, or IHD, said.

IHD said a delegation of human rights activists met with Turkey's deputy interior minister last month to seek a solution that would end the hunger strike. The government refused to “assess" the demands until the protest was called off, the association said.

Zulfu Livanelli, a popular Turkish singer and songwriter who sang with Grup Yorum during one of their 2012 concerts, expressed sadness over Bolek's death on Twitter, saying “ the struggle to prevent hunger strikes from not resulting in death has unfortunately failed."

Judge: $750K bail for 3 ex-officers accused in Floyd's death
Jun 4, 2020 1:04 PM
Comments
We welcome your feedback and encourage you to share your thoughts. We ask that you be respectful of others and their points of view, refrain from personal attacks and stay on topic. To learn about our commenting policies and how we moderate, please read our Community Guidelines.