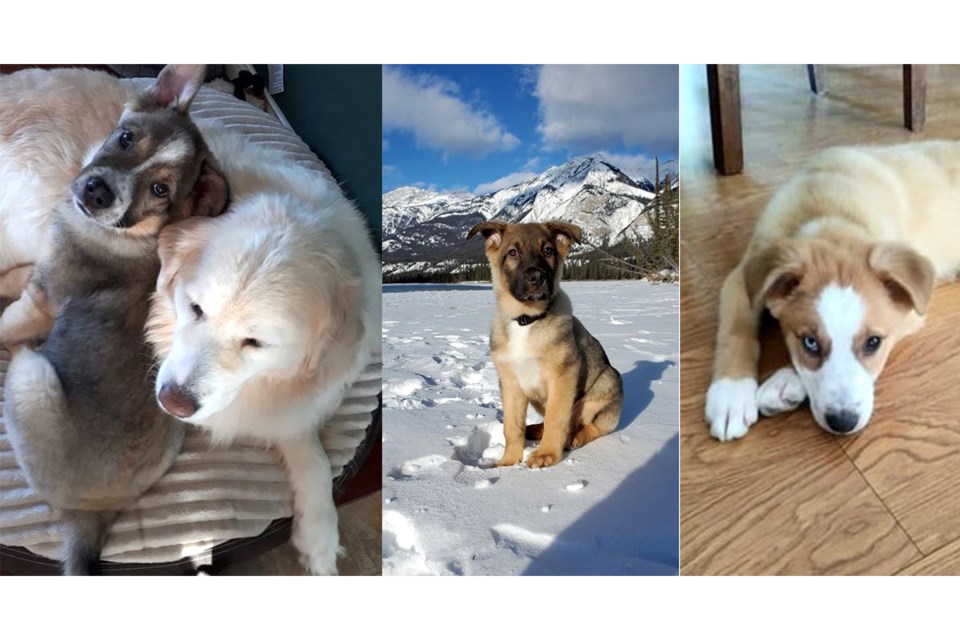 Lucy, Hank, and Max all found their forever homes after being found abandoned in Frog Lake in January. Photos submitted.

BONNYVILLE – The rough start to Lucy, Hank, and Max’s life is now in the past. All three young pups have found their forever homes.

The three puppies were found abandoned on the side of Hwy. 897 on Jan. 14 in Frog Lake. They were found by Elk Point RCMP and the officers were concerned for the animals’ wellbeing. The dogs were brought to the Bonnyville and District SPCA to be looked after.

Shelter manager Judith Rodriguez described the pups as "weak, lethargic, and (with) very little appetite" at the time, and staff knew there was something wrong with them.

The three were diagnosed with Parvovirus, which is a highly contagious and very aggressive viral disease of the stomach and small intestines.

After being cared for by local veterinarians and being kept in a very strict quarantine, the puppies slowly began to get healthier and were eventually put up for adoption.

Adoption applications for the three were opened in early February and it was Hank who was the first to find his forever home on Feb. 12. An update the shelter received said he is getting along great with his new brother, and is doing wonderful in his new home.

Lucy, who’s new name is now Andrea, was adopted on Feb. 14 and also bonded instantly with her new family.

Last but not least, Max was paired with a family and now goes by the name Leo. His new owners say he’s still a little wary of his new pup cousins, but they’re confident he’ll warm up to them in no time.

“He loves exploring all of the new sights and sounds of Jasper,” Max’s owners said in a statement. “He’s a good runner, extra cuddly cuddlier, and a big-time napper. We can’t wait to take Leo on more adventures.”