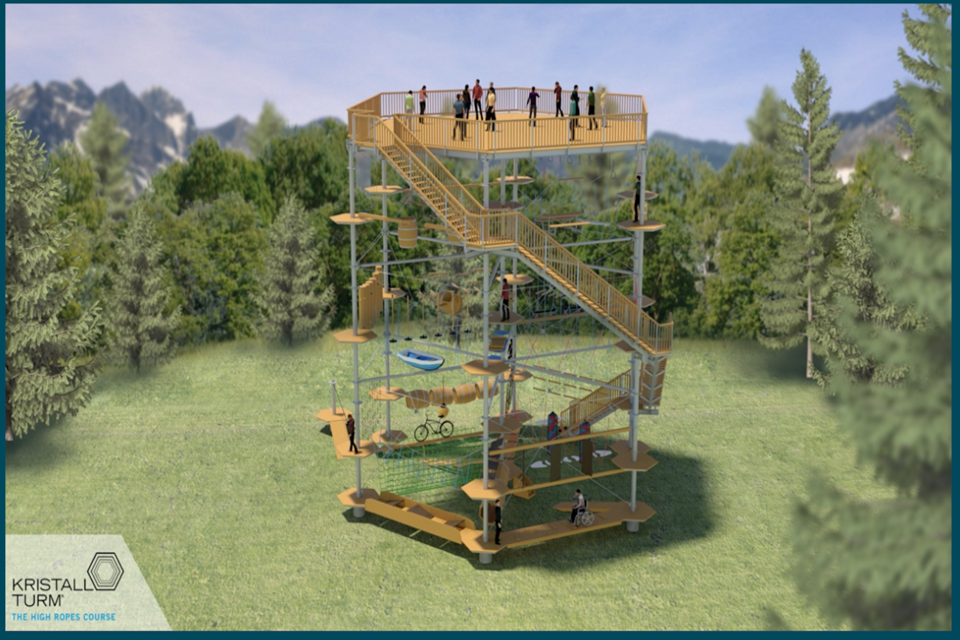 A rendering of what the Kinosoo Ridge Adventure Park will look like once its completed. File photo.

BONNYVILLE – Residents and tourists now have a better idea of what the Kinosoo Ridge Adventure Park will look like.

The concept options for the adventure park’s design were presented to MD of Bonnyville council during the Dec. 9 meeting, which included an overview of activities the structure will offer as well as additional features that could be added on later.

Simon Armstrong-Bayliss, project manager with Edmonton-based McElhanney Ltd, noted the design was made with future development in mind.

Coun. Dana Swigart said, “I’m glad you’re building it so it can be expanded because I believe in the future it could easily be. Especially since we’re talking about yurts and getting people to stay out there in the summer to camp out in the area and that sort of thing.”

The adventure park is anticipated to attract between 3,000 and 6,000 visitors within the first year of operation, stated Armstrong-Bayliss.

The structure will have three levels along with a ground level. Each level gets increasingly difficult as the user climbs.

The lowest portion has standard activities and is considered a child-friendly course. It’s also wheelchair accessible.

“This level is near the ground, which means parents and caregivers are able to walk alongside the features and assist those who are enjoying them,” noted Armstrong-Bayliss.

Users can balance across a beam, climb up a pair of stairs, run up a ramp, among other activities in this portion.

Level one is a step up from the previous one and includes themed elements that relate back to the MD. They include oil and gas, agriculture, the Lakeland area, and air force base. The themed elements will be worked into the activities, such as people climbing across oil barrels and straw bales, or strapping themselves into a jet fighter seat.

There’s also the possibility of another themed element from the area being added to the final design. According to Armstrong-Bayliss, McElhanney Ltd has reached out to Cold Lake First Nations to include cultural aspects in the adventure park.

“We have every intention of incorporating themed elements relating to them to be represented, however, our intention is that those would be more in the overall site than on the specific elements.”

Activities will get even trickier on level two, with the first difficult feature popping up in the form of a slackline. Climbing through a tube, monkey swinging your way across, running across a wide bridge are among the other activities on this level.

The final level is the most challenging area of the structure. Climbing across a clothing line, using ladders, and stepping on UFO saucers make the highest level that much more memorable for the adventure seekers that get this far.

Armstrong-Bayliss said they’re anticipating it will take people between two to three hours to complete the entire course, not including the kid's area.

One item that was up for discussion was how someone would get off of the structure once they reach the top.

The two options presented were a zipline and abseiling, with council choosing abseiling as they could have two structures along with an additional climbing feature.

“Abseiling is where patrons hook themselves up at the end of a gang plank, clip in, and then take a big leap of faith down to the ground from almost 16-metres high,” Armstrong-Bayliss explained.

He added, “It has a self-breaking system. You don’t free fall the 16-metres, that would be terrifying. But, the first three or four metres you would be free falling and then the device will recognize that you’re falling and it applies gradually more and more friction. These are pieces of equipment that are utilized in almost all climbing equipment in the world, from what I understand.”

In the future, the structure could also include flood lighting and a material crane to assist in hosting events on a platform located on top of structure, along with incorporating the passenger conveyor belt to make the site more accessible.