Around 200 people crowded into the Ardmore Community Hall Thursday night to hear presentations from Keith Wilson and Joe Anglin on legislation relating to power transmission lines and the rights of property owners they say has changed the face of Alb
Jan 18, 2010 12:00 AM By: Lakeland Today Staff 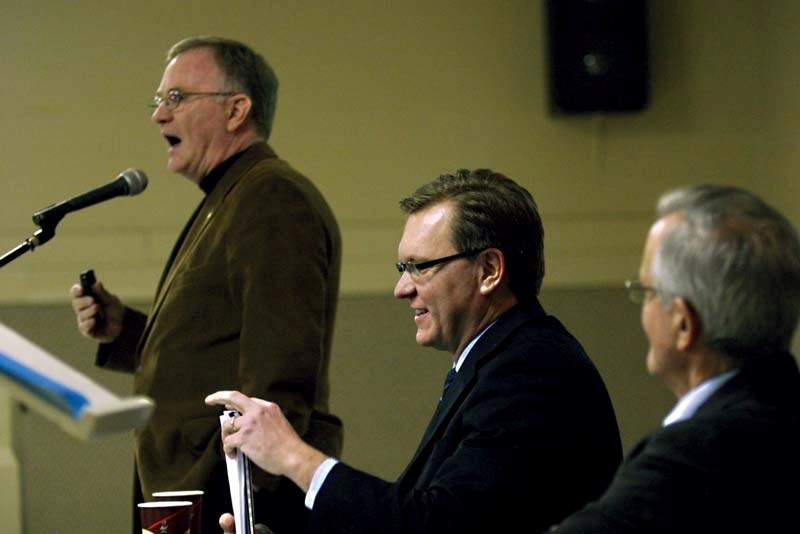 Around 200 people crowded into the Ardmore Community Hall Thursday night to hear presentations from Keith Wilson and Joe Anglin on legislation relating to power transmission lines and the rights of property owners they say has changed the face of Alberta.

The meeting was held to inform the public about the Electric Statutes Amendment Act (formerly Bill 50) that many opponents insist would allow the province and electricity providers to expand Alberta's power grid at the expense of property owners, who could have their land expropriated in a quick period of time and not have any right to appeal.

“It's a shocker to most crowds,” said Anglin after the meeting. “The problem is it's the truth. That's the hard part.”

The meeting also addressed the Land Stewardship Act (formerly Bill 36), which Wilson said takes away a landowner's right to compensation or appeal if a decision is made with a regional plan.

On the same day as the Ardmore meeting, an online blog post by Premier Ed Stelmach announced he has instructed his ministers to, “take another look at the legislation (former Bills 36 and 19) to amend any wording that could be misinterpreted and ensure that it clearly reflects our intention, including maintaining respect for landowners' rights.”

“Any changes that need to be made to better clarify the government's actual intent relative to protecting landowners' rights will be made. We'll also make sure no regional plans are approved before this review of the legislation is complete.”

The intent of the legislation has been “wrongly interpreted,” Stelmach said, adding the intent was to provide responsible, co-ordinated, long-term planning.

Anglin, who has an engineering background, focused on former Bill 50, the Electric Statutes Amendment Act.

The shock value benefits the government because it's so outrageously rude to the democratic process, he said.

Anglin hoped to give the audience background on complicated legislation.

“Then they can see some of the threats the legislation is bringing, particularly in regards to spending money. Then when you see with the removal of rights it all starts to come together.”

Anglin, a councillor in Rimbey, called the Land Stewardship Act one of the most complicated pieces of legislation he has ever seen.

“This was really well thought out,” he said, “Because it's so meticulous in how it takes away rights and prevents any type of rights to be exercised.”

A change of government is the solution to the controversial legislation, according to Anglin. The solution for Wilson is to repeal all three bills.

Wilson, who is a lawyer, talked for over an hour on former Bill 50 and commended the MD of Bonnyville for hosting the event. The MD was one of the first municipalities to oppose at the legislation, said Wilson, which earned audience applause.

Leskiw told the Nouvelle the Land Stewardship Act respects landowners rights and would not extinguish land titles, and the municipalities responsibilities for land use bylaws would not change.

Wilson started researching the three bills, Bill 19, Bill 36, and Bill 50, which have all passed into acts, at the request of the Legal Education Society, a role Wilson said he has had second thoughts about.

He said he may have been better off telling the society he was busy sorting socks, because since reporting his findings he has been busy travelling the province on his own dime.

“The audience seemed to understand that this is very serious, it affects each of us as Albertans, it affects the future and the future prosperity of our province and it has the potential to fundamentally change what Alberta is all about,” said Wilson after the meeting.

He called the legislation a “dramatic assault on property rights, the rule of law, and the principles of a modern democracy.”

The legislation smacks of Eastern European communist countries, he said after the meeting.

He said he thought the information he heard Wilson speak on at a conference in Camrose was important enough that council should get the information out to constituents and let them make up their own minds.

Wilson and Anglin declined to tell the audience which party to vote for in the next election, but during the question period Wildrose Alliance candidate for Bonnyville-Cold Lake, Chuck Farrer, said his party would repeal all three bills and entrench property rights to the Alberta Bill of Rights.

“Upon election we will repeal those bills and come out with the property rights preservation act,” Farrer said before the meeting. “You have to entrench it in the Alberta Bill of Rights where the property rights of the individual farmers or whoever are protected.”

On the day of the meeting, the Wildrose Alliance sent a press release saying it would repeal “bad bills” and restore property rights.

The legislation puts Alberta in the same legal position as a Third World country where the government can take property, business rights, and livelihood away at whim without court recourse or right to compensation, Wilson said.

“It surprises me that something as radical and far left as grabbing property rights would be on their agenda,” said MD resident Paul Gullackson, during the question period. He asked what the motivation of government was to create the legislation.

The presenters encouraged the audience to access any of the documents they talked about as well as other resources online at landownersagainstbills.com.

Sustainable Resource Development Minister Mel Knight will hold a public meeting with his parliamentary assistant Even Berger and Leskiw at the Beaver River Fish and Game on Feb. 2 between 1-4 p.m.