The MD of Bonnyville discussed changing the speed limits on some of their roads.
Jun 17, 2021 11:30 AM By: Meagan MacEachern 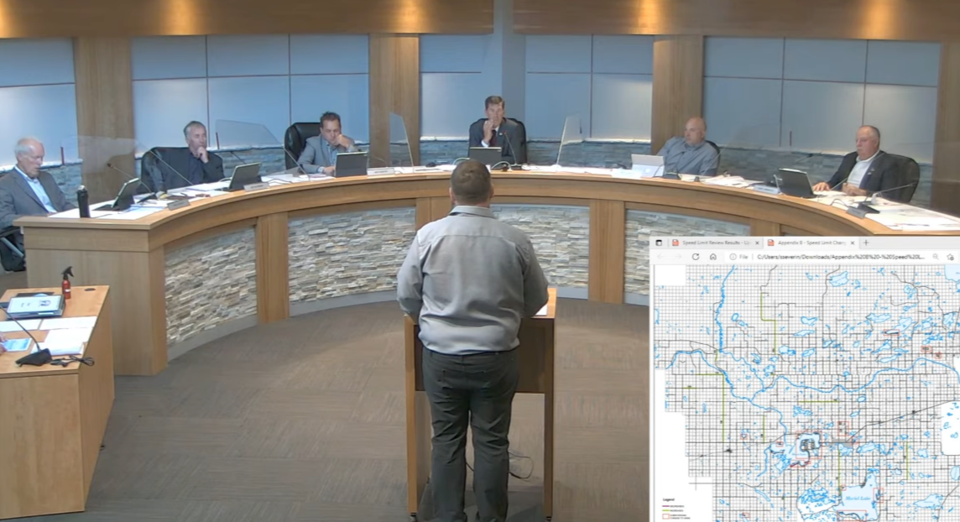 Director of Environmental Services Matt Janz explains why the MD shouldn't rush into changing the speed limits on some of their roads. File Photo

BONNYVILLE - The MD of Bonnyville is approaching speed changes on their roads cautiously.

On Wednesday, June 16, council met for their committee meeting where they discussed increasing the speed limits of certain roads throughout the municipality.

While they agreed that hamlets and subdivisions should all be marked as 40-kilometres per hour, there was discussion surrounding some of the faster roadways.

According to General Manager of Environment and Protective Services, Matt Janz, certain roads in the municipality council was considering increasing to 100 km per hour aren't engineered for that speed.

“It has come to our attention that the roads have only been engineered to accommodate an additional 10 km over the posted speed limit of 80 km," he explained.

Width of the road and shoulder, grade, surface, and slopes are just some of the factors considered when engineering a road.

CAO Al Hoggan said they could bump the limit up to 100 km per hour anyway, however, it's not necessarily in the MD's best interest.

"If we were to increase the speed limits today to 100 km, exceeding the current engineering guidelines on that road, we would be exposed to a significant liability if there were to be an accident," he stressed.

If council did want to look into bumping up the speed limit above the 90 km threshold, Hoggan suggested hiring a third-party engineer to determine whether it was safe enough to do so.

But council didn't feel it was even necessary to take that step.

“I am definitely not in favour of even thinking 100 km or getting a third party to come and assess this and go any further," expressed Coun. Marc Jubinville. "I think the residents will be happy if we increase a couple of the roads to 90 km."

Gurneyville Rd. and Dupre Rd. were two of his recommendations.

“You look at those roads compared to the gravel roads that are at 80 km, you should be able to legally travel 10 km per hour faster than the gravel roads,” Jubinville added.

While he believes some speed limit standardization is necessary, Reeve Greg Sawchuk said as far as going up to 100 km per hour, "that's out of the question."

"The worry, is some of our roads do have an awfully sharp drop-off, and that could be an issue... Just because it's nice and smooth up top, if you've got that initial drop-off the pavement, that could cause a serious accident."

Council directed administration to standardize 40 km per hour in all hamlets and subdivisions throughout the MD, in addition to bringing back their recommendation for roadways that could be increased from 80 km to 90 km per hour.

The municipality will also reach out to Alberta's Minister of Transportation, Ric McIver, in relation to highways in the area.