The MD of Bonnyville won't be rushing into changing their speed limits just yet, following a discussion during their April 13 council meeting.
Apr 21, 2021 1:00 PM By: Meagan MacEachern 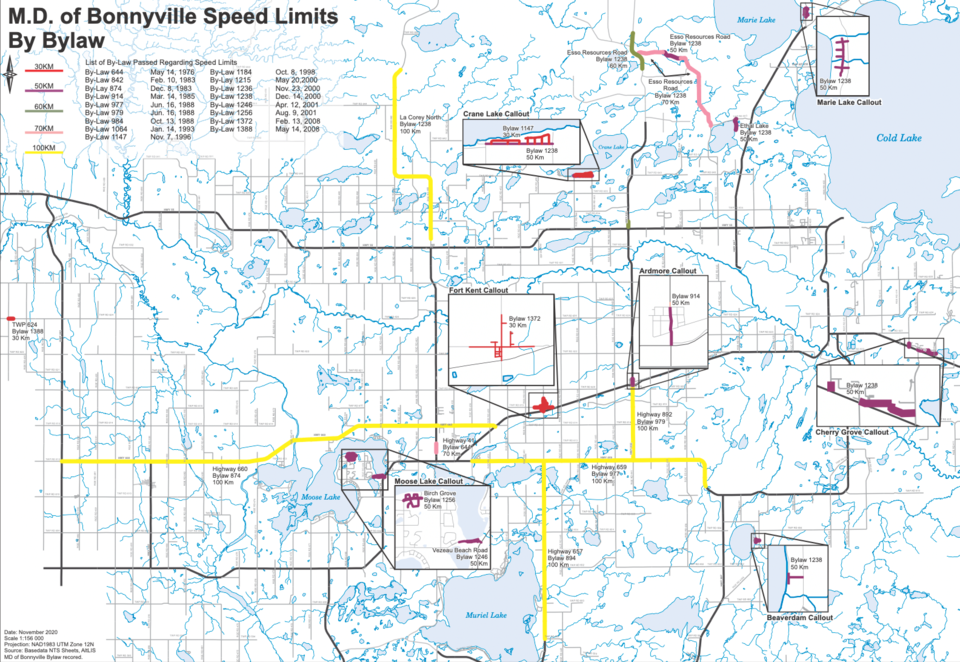 BONNYVILLE - The MD of Bonnyville won’t be rushing into changing speed limits within the municipality just yet.

Luis Gandolfi, director of public safety, was tasked with reviewing the speed limits in the MD of Bonnyville and bringing back his recommendations.

“I don’t profess to be an engineer, or a traffic roadway specialist, but certainly I have some experience with traffic safety and speed-related injuries,” he expressed.

On April 13, Gandolfi presented his findings to council, who agreed with some of his suggestions and made some of their own.

The public safety department would like to see a customary speed for subdivisions throughout the municipality, however, Gandolfi noted it may not be a realistic goal.

“There’s also an appetite to standardize, to some extent, where possible, between the various subdivisions, but that’s complex because not every subdivision is populated to the same level and isn’t engineered the same way."

Based on what Gandolfi found, he has a list of 16 recommendations where he thinks there could be a rise in the speed limit.

All of the roadways included appear to be constructed to highway spec., he noted.

However, there were some locations he felt the current speeds were appropriate.

“There were a couple of spots where I did not make the recommendation, for example... Range Rd. 470 between Hwy. 55 and Twp. Rd. 631. My reasons are indicated - the road appears to be a little bit narrower than the other roadways and given that it’s not a very long stretch, I didn’t see much value in increasing it for such a short period of length,” detailed Gandolfi.

Gandolfi wasn't only focusing on increasing the speed on municipal roads. He also advised council of some places where there could be a drop in the speed limit.

Gandolfi proposed all subdivisions, not including arterial roadways, be reduced to 40 kms per hour from 50.

There were some areas council thought Gandolfi may have missed in his report.

Coun. Ben Fadeyiw for example, wondered why the road going past the Bonnyville Golf Course is 60 km per hour.

Gandolfi explained, “I don’t know why, because I didn’t engineer the road or sign it. Anecdotally, what I would think, is because you’re coming from an area where you’re... beginning to access those subdivisions to the west."

Not only that, he said, but there's also the traffic from the golf course to consider, and the vehicles leaving Vezeau Beach hauling boats and trailers.

"The amount of potential traffic and thru-traffic, I didn’t see a problem maintaining that at 60," he added. “Furthermore, in the wintertime, as you know, that intersection can be a problem. We had a collision there just a few days ago actually, so for that reason I did not see it as a priority to increase it to 80."

Fadeyiw added the Marie Lake area to the list, noting the speed limit is higher than the subdivision in Crane Lake.

“It’s not very consistent across the board and I thought that was what we were aiming for, is consistency,” he exclaimed.

Gandolfi said, “I advocate for consistency throughout the subdivisions, I think that makes sense, so I could certainly circle back to that and have a look."

For Coun. Darcy Skarsen, the Vezeau Beach turnoff is at the top of his list.

“The one I am concerned about is one we may not be able to do anything about, and that’s the Vezeau Beach turnoff... Hwy. 28 coming in. Is there anything we can do about that, or somewhere can we send residents to make their complaints or concerns about that?”

His main worry is the overall unsafe nature of that corner.

"There have been a lot of accidents out there."

In fact, this spot in particular has been brought to the province's attention before by council by way of letter. The MD has yet to see any changes made.

Gandolfi said he would take a look at the letters sent in the past and see if there are any details missing that could help their case.

“It’s not our area, but that whole stretch of Hwy. 28 as you’re leaving town to the west, in particular with the fire hall being there and the bike trail... It might be something we might want to... put all of that into some kind of submission,” he explained.

Now that council has offered their two cents, Gandolfi will hit the road and consider their concerns.

Interim CAO Matt Janz said, “We can also look at any of the 90-degree corners and maybe have a protocol on what we have to do with those for signage."

Council decided to wait until all concerns were addressed before approving any changes.