Students at Notre Dame High School (NDHS) have suggestions on how to improve their school, and they weren’t afraid to share their ideas when the board of trustees made a visit.
0
Mar 5, 2019 1:00 AM By: Robynne Henry 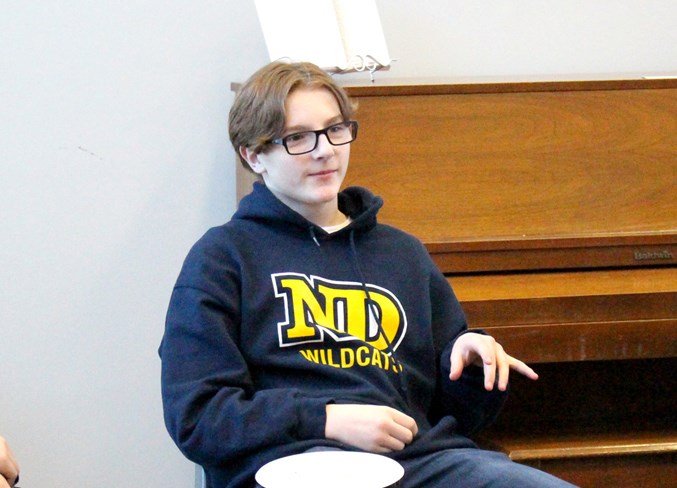 Students at Notre Dame High School (NDHS) have suggestions on how to improve their school, and they weren’t afraid to share their ideas when the board of trustees made a visit.

Mary Anne Penner, board chair for LCSD, noted the meeting with the Grade 9 to 12 students on Wednesday, Feb. 27 was a great opportunity to hear what they had to say about what was going on in NDHS.

“They had a lot to say, maybe not a lot directed toward us, but I think they felt it was a safe environment to discuss some ideas that they had and they were wonderful,” she expressed.

Some of their ideas included offering math and science classes in French, learning more about scholarships available to French immersion students, expanding extracurriculars, and working on a lack of space in some of the hallways.

“The sports program that we started in Grade 9 for hockey, in my opinion, it would be nice to have that for other sports because I know there would be a demand for it,” he detailed.

This could assist with the decrease in athletes that try out for sports in the older grades, as it allows them to develop skills even if they aren’t successful during tryouts.

Colette DeAbreu, Grade 12, said, “I’ve seen students from Grade 10 to Grade 12, the numbers (for teams) have dropped a lot. The people don’t make the team one year, so they don’t have the chance to grow and get better so they don’t try out next year.”

Due to a lack of interest in the student leadership group and athletics, Grade 11 student Realle Vallee suggested going to middle schools to generate curiosity in students heading to NDHS in the future.

The students also proposed an arts program. Munday noted “it all starts here” because they can’t have a strong program if it doesn’t start out at some point.

In addition to programming, the group also discussed the aesthetics of the school itself. Grade 11 student Sydney Martin wondered if changes to the outside of the high school would help it blend in with the upgrades made to the building.

“We have a brand new school. It’s amazing, and from the front it’s gorgeous. But, then looking back, we have dead grass and holes in the ground,” she explained, adding they could also use more outdoor activities.

While a majority of the subjects weren’t specific to the board and what they do, it allowed students to voice their comments and offer opinions on how to improve the high school.

Along with hearing feedback from students, Penner said the meetings are meant to answer questions they may have.

“We’re here to... give them an idea of how a board works. But, a board works in many different ways, and one of those ways is listening to what’s being said.”

She added, she was excited to see what changes are made to NDHS.

“I really thought once they got started, they came up with so many great ideas, and I really look forward to what’s going to happen over the next few months and into the next year to see if they can get some of these ideas into fruition.”