Over seven decades together 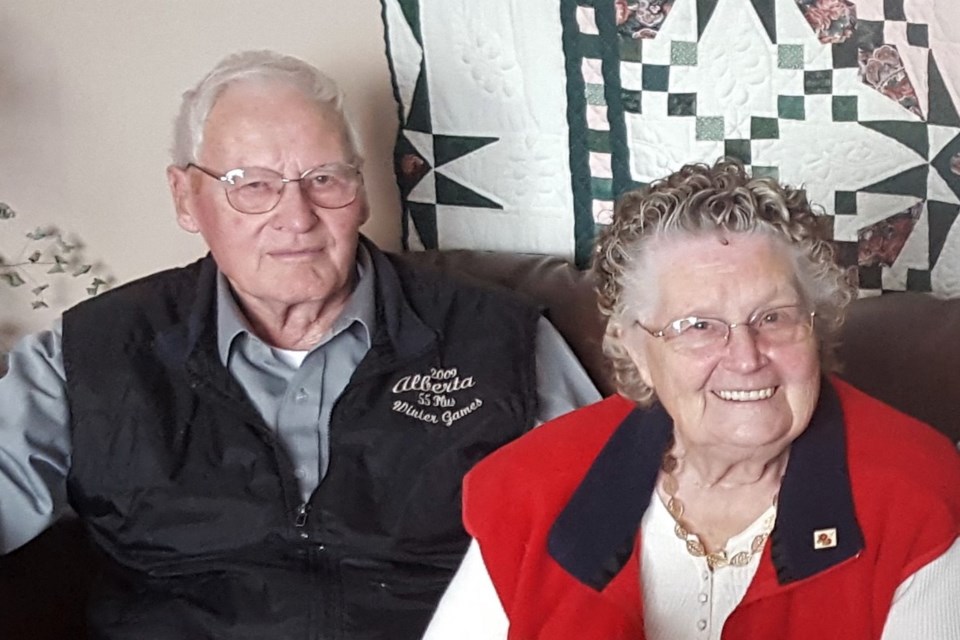 BONNYVILLE – It wasn’t a joke for Lorane and William McGregor when they picked April 1, 1948, as the day they would get married.

“My aunt said ‘you can’t get married on the first of April,’” Lorane recalled. “I asked ‘why not? It’s a day he’ll always remember.'”

The couple celebrated their 73rd wedding anniversary last week, a milestone not many people will reach in their lifetime. When asked what their secret was for staying together this long, Lorane stated simply: "I love the man."

Their 73rd wedding anniversary wasn’t the only milestone celebrated recently by the McGregor’s. William also celebrated his 98th birthday on March 23.

The McGregor’s love story comes from humble beginnings. The two met at a dance in Iron River after William, who many know as Willie, had just come back from serving in the Second World War.

“We went to the dance and she was just sitting, so I went and asked her for a dance. We ended up married two years later,” he said, adding they didn’t see each other for a little while after that fateful first dance.

“We didn’t meet again for another two or three months . . . a dance at the same time and place at Easter. Then we started to see each other once in a while when we were around. We finally got serious, and then we got married.”

William served as a medic for the Royal Canadian Army Medical Cor. Throughout the Second World War, he saw France, Belgium, and Holland.

Once she finished school, Lorane worked for a local farmer and William did as well.

“Willie worked for him in the bush and I worked for him at home. I helped out with the farm. (The family) had four kids, so I worked on the farm with (the farmer's wife).”

The pair settled down in Iron River, where they farmed for 42 years and raised their own family. One daughter and three sons. One aspect that appealed to them was the fact that they could always work together.

“We started out with dairy and after how many years, we went into beef,” explained Lorane. "That’s when the kids all started leaving home. With dairy, you had to be there morning and night. That meant you couldn’t go to the city to see them when they were going to university.”

When one of their sons showed an interest in taking over the family farm, William and Lorane bought a home in the Town of Bonnyville. They have been there ever since that move in 1990. The view of Jessie Lake is what made the property stand out to Lorane, and each year they enjoy seeing the Canadian geese invade their front lawn.

Throughout their home are mementos from their seven decades together, including photos of their family over the years, plaques from the Town and MD of Bonnyville from their 60th, 65th, and 70th wedding anniversaries, medals from William’s time in the army and when he played in the Canada 55+ Games, among others.

Both Lorane and William were greatly involved in the Iron River and Bonnyville communities. William is a member of the Bonnyville Royal Canadian Legion Branch 183 and used to sit on the board. He was also the president of the Bonnyville Seniors Drop-In Centre for 10 years and Lorane also volunteered with the organization.

Before the Bonnyville and District Centennial Centre was built, William was a director for the Agriplex for 18 years.

“When we first built it, the directors had to put up $12,000 each to get it started,” William said. “It didn’t get the grants coming in, but whenever they got the grants, we were paid back.”

Lorane was involved with the local 4-H club, community garden, and clothing club. She also taught adults how to make jean jackets.

“They were the big thing back then and they cost so much. They were very high priced at that time. I (went) from Goodridge to Cherry Grove and in between at all the halls. Twice a week, I was on the road to one of those places," she recalls.

When asked why they gave so much back to the area, William said it was because, “In those days, you had to be involved with the community in order to have a community.”

Although they didn’t have many troubles, Lorane stressed the importance of figuring out problems together, in order to have a long-lasting marriage.

“Don’t (throw) your hands up and run. Sit down, figure it out, and work it out.”