Protect yourself from the flu this season

Residents are being encouraged to protect themselves and others from the flu. Alberta Health Services (AHS) is now providing free flu shots to Albertans six-months of age and older.
Oct 22, 2019 1:00 AM By: Robynne Henry 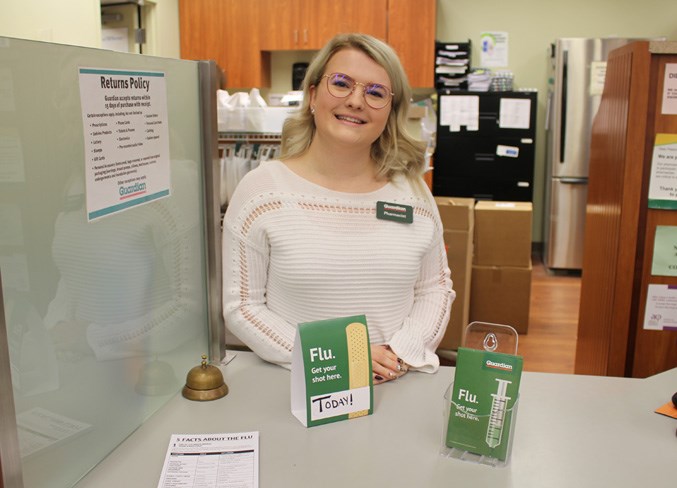 Caitlin McGrath, store operator and pharmacy manager at Tellier’s Guardian Pharmacy, is encouraging everyone to get the flu shot this year.

Residents are being encouraged to protect themselves and others from the flu.

Influenza is a respiratory virus that can be passed from person to person, and can be particularly damaging to those with chronic medical conditions, seniors, or children.

Gerhard Benade, medical officer of health with AHS, said getting the flu shot is the best way to protect yourself and others from the illness.

“We know that the influenza virus changes its characteristics from season to season, and every year, based on what’s circulating in the southern atmosphere, we can make predictions about what’s going to appear in the wintertime, so the vaccine is designed to represent a few features of the virus so when people are immunized they’re given immunity against that virus when it shows up,” he explained.

While the flu shot won’t completely eliminate someone’s odds of becoming sick, it can lessen the severity if it does happen.

“It’s always good for individual health to protect ourselves against influenza,”  explained Caitlin McGrath, store operator and pharmacy manager at Tellier’s Guardian Pharmacy. “A lot of people think, ‘well, why do I need it? I’m young and healthy, and I’ve never had the flu before.’ But, the time of being sick can make someone miss work. Even the flu vaccine can’t prevent you 100 per cent from getting the flu, but it can decrease how serious it is and how long you’re sick for.”

Building up an immunity could prevent the virus from spreading to someone who isn’t able to get the vaccine.

“It’s not just your own health, but for the health of your loved ones, your neighbour’s newborn baby, and the people who don’t have their full immune system defence. Someone you know who’s on chemotherapy for cancer, or a young child that can’t get the shot or who’s maybe sick. It’s a good idea to prevent the transmission that you’d be carrying if you didn’t have the vaccine,” McGrath detailed.

Tellier’s Guardian Pharmacy is among the local locations where flu shots are available, and no appointments are necessary for residents ages five and up because all of their pharmacists are certified.

“It’s just walk-in, we just ask that you hang around for 15-minutes afterwards to make sure that you tolerate it okay. But, whenever works for the patients that want to come in and get it, it works for us.”

Since flu season runs from October to March, it’s better to get immunized sooner rather than later.

“That’s something I would say to people, you want to give yourself time to develop a defence before the season is in full swing,” McGrath noted.

McGrath and Benade stressed that getting the flu shot won’t cause you to fall ill.

For more information on where clinics will be held in the Lakeland, visit www.ahs.ca/influenza or call Health Link at 811.