It wasn't much fun to drive in or walk in, but the vicious snowstorm that hit the region Friday brought more than just temporary hardship and inconvenience. A lot more.
Apr 13, 2010 1:00 AM By: Lakeland Today Staff 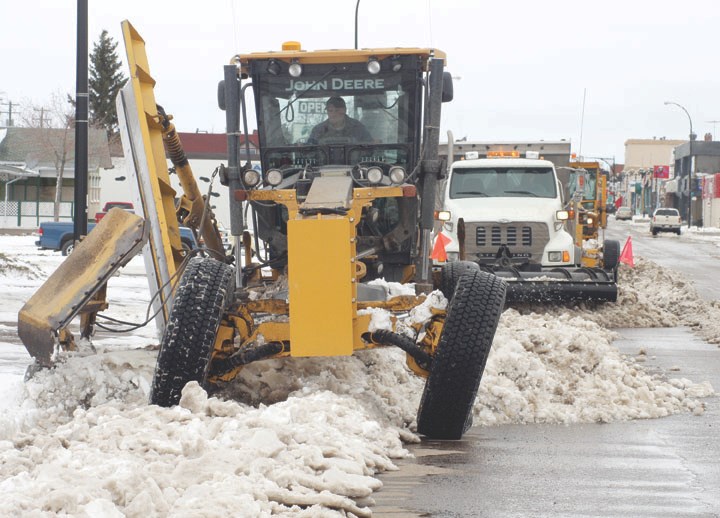 It wasn't much fun to drive in or walk in, but the vicious snowstorm that hit the region Friday brought more than just temporary hardship and inconvenience. A lot more.

It brought a badly needed and immediate surge in soil moisture for producers, as well as banks of snow that will slowly melt into the parched ground.

“This will get us by for the next two weeks to a month,” said Matt Janz, the MD of Bonnyville's director of agriculture services.

He said the longer-term positive impact from storm runoff should become clearer as the snow melts and runoff materializes.

Of course the long-term gain had to come with some short-term pain for motorists, pedestrians, shovellers and pretty much anyone trying to get anywhere.

RCMP were advising against travel on Friday and Saturday outside town, and graders and plows had to manoeuvre their way around stuck vehicles as they tried to keep roads passable.

No local life-threatening crashes resulted from the mess, according to Bonnyville RCMP, but there were dozens of incidents that required police attention in and out of town.

The heavy snowfall that followed rain Thursday night. That moisture should guarantee farmers have moisture to seed crops into once they can get out in their fields.

As of Monday, main town roads were largely cleared of slush lakes, though the freezing conditions made for bad traction, and lesser used side streets were a challenge. Sidewalks were slippery in many places, or still clogged due to unshovelled drifted snow.

Most school buses ran Monday on the first day back from spring break for students, but buses didn't run on seven routes in Northern Lights School Division, said Matt Richter, NLSD's director of transportation. Six of the seven cancelled routes were in the MD of Bonnyville area, he said.

“I hate spring storms,” Richter said, echoing the thoughts of many. “When it's -40, you can predict things, but not in spring.”

Things were also looking better in the MD by Monday, where plow and grader operators had to rip through blown-in roads drifted several feet high.

“We had all our graders out all weekend. We had three plow trucks out all weekend,” said Darcy Zelisko, the MD's director of transportation and utilities. “We were pretty much in emergency mode. We had nothing else to send out there.”

Zelisko said the storm was probably the worst one the MD has had to deal with in about five years, and it came after crews had started to prepare some equipment for the summer construction season.

“We were in the midst of switching some of our plow trucks over,” Zelisko said.

He said the hardest hit area of the MD in a winter storm is typically the Flat Lake area south of Glendon, but in this case, the road chaos was more widespread.

“Pretty well border to border we got hit this time,” he said.

By Sunday morning MD crews had opened up a blown-in stretch of Range Road 444 east of Bonnyville, leaving snowbanks more than 12 feet high in some places.

MD resident Tanya Hollasch said she, her husband Robert, and their son Cody were prepared to try four-legged transport from their residence until MD crews opened their only access road to the outside world.

“We were prepared to saddle up our horses and ride up to the highway,” Hollasch said, adding the journey could have taken them to a neighbour's home for coffee.

“Hat's off to the MD,” said a thankful Hollasch, noting past storms have kept their road closed for four days.

The storm brought hard rain on Thursday that soaked into the ground ahead of the snow. Just how much landed on the Hollasch horse ranch is hard to know, however, because the family's rain/snow gauge couldn't be read Sunday.

“It blew away. It was like a hurricane out here,” she said, noting she had to put a winter jacket on a shivering stallion to keep him warm.

Horses weren't the only ones shivering Friday and Saturday, as many area residents struggled to keep their cars or feet moving through drifts several feet high.

In town, crews addressed the main routes through the weekend, and were continuing to plow snow away from curbs on residential streets as of Monday morning.

“We've plowed to the middle where we can,” said Town of Bonnyville CAO Mark Power said Monday, noting the work was being done to keep storm drains open.

“All of the priority roads are done and we're working on secondary roads.

Both town graders were pressed into action, and used in tandem with a plow to clear 50th Avenue and other streets Sunday.

While it probably felt like more to most of us, 4 Wing Cold Lake recorded only 12 centimetres of snow and 18.4 millimetres of total precipitation in the storm.

More may have fallen in the Bonnyville area thanks to several hours of rain before the snow.

“The big kicker on this one was we had 33 knots of wind, which really blew things around,” he said.

While the moisture was welcome, it didn't bring an immediate end to the fire ban in the MD. That will have to wait, at least for now.

Regional fire chief Brian McEvoy said in an e-mail Monday that the ban is still on.

“The weekend snow has been great for addressing the immediate concerns about wildfire, however it has not been enough to lift the fire ban. We will be reassessing the fire ban status this week in conjunction with Alberta Forestry to determine the overall impact of the moisture we have received,” McEvoy said.

“The fire hazard in this area has been so far past extreme this spring that this moisture may only bring us back to the threshold for the extreme category.”