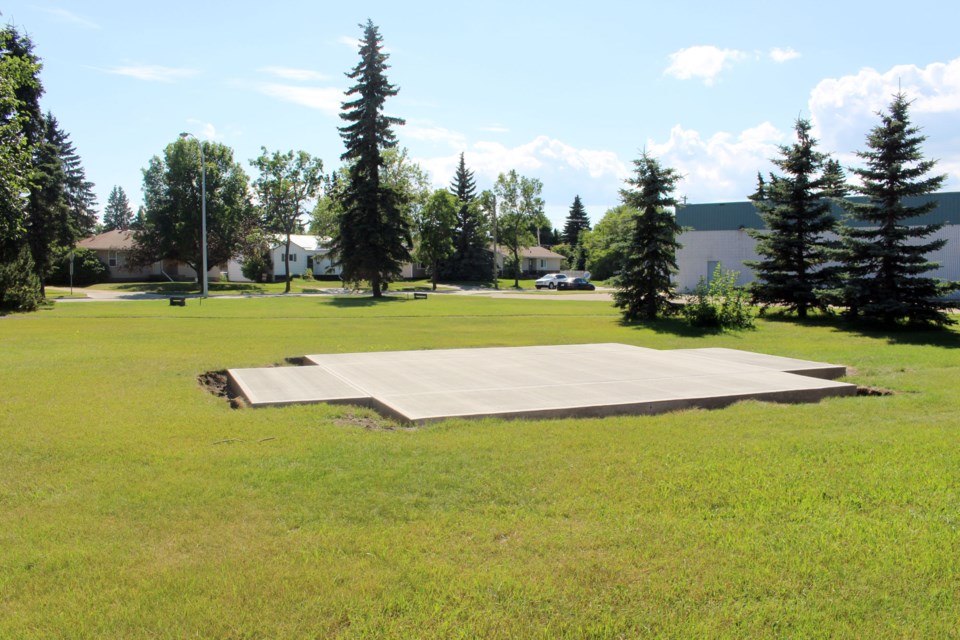 The Town of Bonnyville will be adding a pavilion to the area located beside the Bonnyville Seniors' Drop-In Centre. Photo by Robynne Henry.

BONNYVILLE – Unused green space in the Town of Bonnyville will be more enjoyable for residents with the installation of a pavilion beside the Bonnyville Seniors' Drop-In Centre.

The project is happening in collaboration with the MD of Bonnyville, who offered the structure to the town after plans to remove it from its current location.

“The pavilion was located out at the Shaw House, at the public park beside it on the MD property,” explained town CAO Bill Rogers. “They were removing it so they could put up some recreational equipment in its place, and they asked us if we had a use for it. In discussions amongst staff and council, the idea of putting it up in the little park beside the seniors' centre came up and that’s the direction we took.”

Germaine Prybysh, president of the seniors' drop-in centre, believes the addition is going to be a benefit for the whole community.

The structure will be built between the seniors' centre and the Bonnyville Swimming Pool, next to the horseshoe pit and the monument to the founders of Bonnyville.

The MD is currently in the process of upgrading the Vezeau Beach campground and park and the decision was made to remove the pavilion to better utilize the area.

“We’re developing the parking area for safe delivery of boats into the boat launch with a single entry and exit area,” explained Caroline Palmer, MD general manager of planning and community services. “One whole full-circle loop will encompass that area, so we did an expansion of the boat launch and part of the pavilion was there, as well as the park that we’re installing. It just wasn’t a highly used area so we felt that we could have better use this way than what it was before and we needed the expansion capability again because the boat launch was so popular. We needed to make it safer.”

Palmer said donating the pavilion to the town “only made sense.”

“They were the owner of the Vezeau Beach with the MD and it only made sense for it to be offered to the Town of Bonnyville,” she noted. “They were part of the park, as well as the Lakeland Sports and Recreation Society, that originally started Vezeau Beach. So it was honouring the town that they should be given the ability to have the pavilion.”

Palmer added that they wanted to make sure there was still a use for the pavilion, and it "didn’t get dismantled and put in storage for something that would come up in the future."

According to Palmer, the work is coming along nicely at Vezeau Beach and the hope is to have it completed by the end of September.

Province searching for new registry agent in Bonnyville
Aug 8, 2020 3:30 PM
Comments
We welcome your feedback and encourage you to share your thoughts. We ask that you be respectful of others and their points of view, refrain from personal attacks and stay on topic. To learn about our commenting policies and how we moderate, please read our Community Guidelines.