Several jurisdictions are reporting that a majority of patients in hospital are under age 60.
Apr 7, 2021 12:15 PM By: Canadian Press 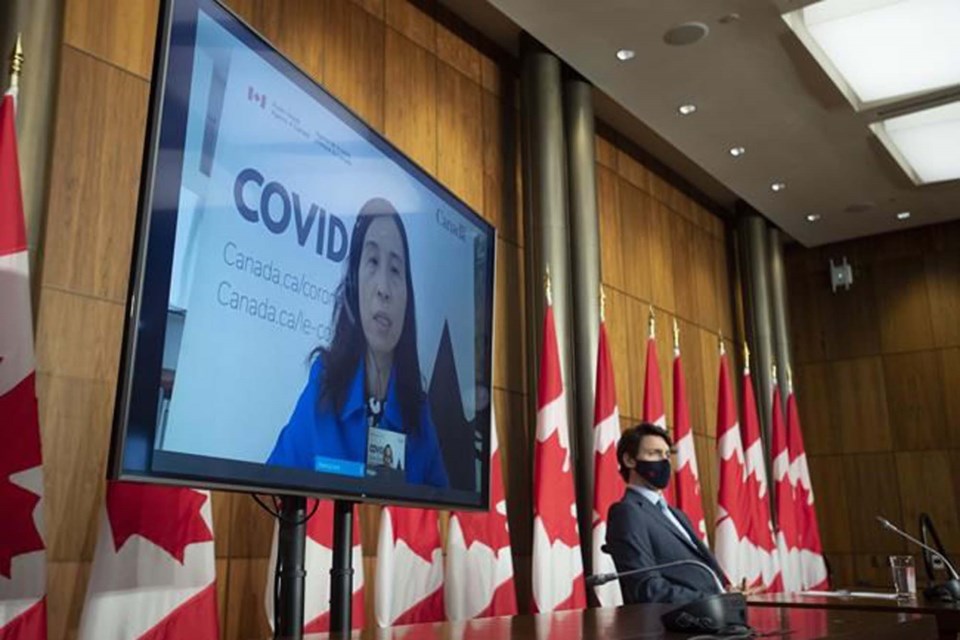 OTTAWA — Provincial governments are grappling with how to bring the third wave of COVID-19 under control, as the more virulent variants of the virus begin to dominate and younger, healthier people are getting very sick, very quickly.

From Ontario and Quebec to British Columbia and Alberta, fear of the variants is growing as swiftly as the caseloads, particularly for young people who might still think the virus won't hit them that hard.

"This is a reminder that COVID-19 can impact people of all ages, and severe illness can occur at any age," said Dr. Theresa Tam, Canada's chief public health officer.

Provincial health officials report increasing numbers of hospital admissions of younger patients who soon need intensive care, she said Tuesday. "Many of them deteriorate quite quickly and have to be admitted to the ICU."

But the hospitalization numbers concern her the most, and the share of hospitalized patients who need critical care is growing fastest.

That means about one in every three patients hospitalized with COVID-19 now need critical care. In mid-January, when hospitalizations during the second wave of the pandemic peaked at 4,775, about one-fifth, or 880 people, were in the ICU.

Several jurisdictions are reporting that a majority of patients in hospital are under age 60, and physicians across the country are increasingly taking to social media to drive home this is not a virus that attacks just the weak or the old.

"Younger people think they are invincible," tweeted Dr. Kevin McLeod, an internal medicine specialist in Vancouver. "That feeling quickly fades when we are blasting you with 100% oxygen ... and all you really hear is a team debating pros and cons of intubating you and hooking you up to a ventilator."

There is increasing pressure on provinces to get vaccines to younger, essential workers faster, in industries where it's known the virus is spreading and workers can't stay home.

Prime Minister Justin Trudeau spoke with Ontario Premier Doug Ford Tuesday. A summary of the conversation provided by the Prime Minister's Office said they both agreed that it is important to keep working together on the vaccine rollout.

It also said they "both supported maintaining a Team Canada approach to protect the health and safety of Canadians."

Public sniping between Ontario and Ottawa over the vaccine supply and delivery grew in recent days with Ford blaming slow delivery of vaccines for uneven distribution, and federal Health Minister Patty Hajdu taking to Twitter to point out how many doses Canada had delivered versus how many provinces had injected.

Hajdu said Tuesday she was only offering up facts. About 6.7 million jabs have been administered, out of more than 10 million doses distributed. But as much as 15 per cent of those doses were received by provinces only in the last few days.

Canada was nearing the six million mark for the number of people vaccinated with at least one dose Tuesday afternoon.

Tam said vaccines are helping but warned they aren't a panacea and, with the variants exploding, there is still a need to limit interactions and to wear masks.

There are more than 15,000 confirmed cases of variants in Canada, up from 9,000 on March 30. Positive cases are now screened for a variant but it then takes several days to identify which one it is.

Ontario has confirmed about 2,300 variant cases but has more than 27,000 cases screened and awaiting full sequencing.

More than 90 per cent of confirmed variant cases are the B.1.1.7, first identified in the United Kingdom. But the P. 1 variant first identified in Brazil is also charging ahead quickly, particularly in British Columbia where 737 of the 857 P. 1 cases in Canada have been confirmed.

Tam said chief public health officers from federal and provincial governments met over the weekend to discuss the P. 1 spread, and are working to double efforts to manage known P. 1 cases.

Tam pushed again against Canadians travelling anywhere at the moment, be it internationally or within the country. Interprovincial travel is believed to have spread the P. 1 variant between British Columbia and Alberta in recent weeks.

Lab studies suggest vaccines are less effective against this variant, she said.

Just days after invoking a provincewide "emergency brake," Ford is pondering even more restrictions in Ontario, pushed by local public health doctors in Ottawa and the Greater Toronto Area.

The province has not closed schools, but local public health chiefs in Toronto, Peel and Wellington-Dufferin-Guelph ordered all schools closed until at least April 19.

Beginning Thursday, gyms in the province's red zones, including Montreal and its suburbs, will close, and places of worship will have to limit attendance to 25 people.

As of next Monday, students in the last three years of high school will attend class on alternate days, and extracurricular activities will be cancelled.

In Alberta, where about 43 per cent of the 10,000 active cases are variants, Premier Jason Kenney announced a shutdown of indoor dining in restaurants and reduced retail shopping capacity.

B.C. provincial health officer Dr. Bonnie Henry said she expected the U.K. variant to get a "competitive advantage" in the province and that variants of concern would make up about 60 per cent of infections by next month.

B.C. reached a new infection peak over the long weekend at 1,077 cases and reported 1,068 on Tuesday.

This report by The Canadian Press was first published April 6, 2021.