The Cold Lake Bike Park and Trails Society made a request to City of Cold Lake council for a monetary donation to their bicycle skills park and trails
Sep 16, 2020 8:00 AM By: Robynne Henry 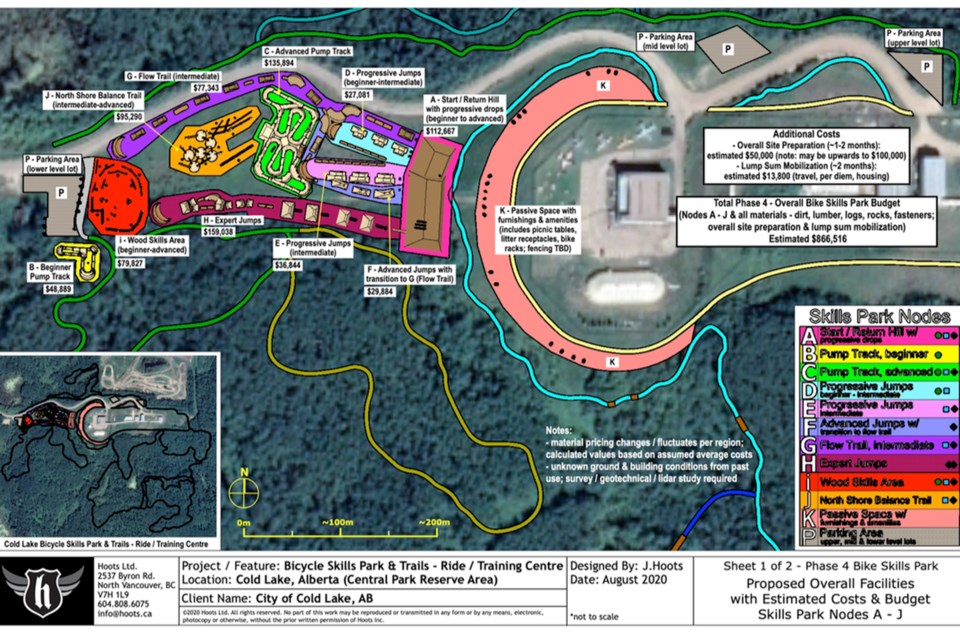 The Cold Lake Bike Park and Trails Society are in the process of raising funds to add a bicycle skills park and trails in Cold Lake. File photo.

COLD LAKE – A bike park in Cold Lake is starting to take shape.

Representatives from the Cold Lake Bike Park and Trails Society made a delegation to city council on Sept. 8 requesting up to $850,000 to go toward the bicycle skills park and trails they want to bring to the area.

It would include a balance trail, flow trail, advanced pump track, progressive jumps, a wood skill areas, among others that beginners to intermediate riders could enjoy. This project would be in addition to a number of trail systems that have been built in the area, which includes a variety of skill-level options.

Harris noted they wanted to complete the trails first to give people an idea of how enjoyable it can be.

“A big percentage of people in the area and community have never been to or rode in a bike park,” he said. “A person who hasn’t been to a bike park before doesn’t really understand what a bike park is until they start riding it.”

This past summer has seen an increase in trail users and the society have had an overwhelming number of requests for the park to be built.

Users can choose what level of difficulty they ride, which was also taken into account during the phased approach the society took to upgrading and adding amenities to the Cold Lake location.

“As the phases go, you want to do the easier stuff at the beginning and as you get through the phasing you get to the harder stuff. Therefore, people work into the trails instead of getting hurt doing something they’re not used to doing. It’s safety first because we don’t want people crashing. We want people to enjoy it and come back.”

According to Harris, the next closest bike park is 350-kilometres away. This is one of the reasons City of Cold Lake Mayor Craig Copeland believes upgrading the trail system will attract more people to the area.

“This is all about making the Cold Lake area a great place to want to live and recreate. I think the bike park compliments a segment where a lot of people are camping and not necessarily fishing, they’re looking for outdoor activities and the bike park is going to provide that for people who are camping here so it’s fantastic,” he exclaimed.

The idea for a bike skills park and trail first came in front of council four years ago when a local youth pitched the idea and it has blossomed since then.

“Council always knew the elevation of the land over there by the museum would really play well for the bike park,” noted Copeland. “It’s extremely impressive and part of what we’re hearing and seeing is there’s people coming from all over to use the park. That’s pretty exciting, especially getting more and more people to come to Cold Lake to help keep the economy afloat here is important.”

Harris said the goal is to break ground on this new phase in April, but it’s contingent on being able to raise the funds. If the municipality doesn’t cover the whole estimate, the Cold Lake Bike Park and Trails Society will fundraise to cover the costs.

So far, the support from the local community has blown Harris and the society away.

“We knew there was going to be a high interest in it, but the interest has blown out of proportion. It’s amazing,” he exclaimed.

Cold Lake council accepted the delegation as information and will discuss the request further in November during budget deliberations.

Cold Lake RCMP charge two in break and enter at oil lease site
Sep 15, 2020 3:00 PM
Comments
We welcome your feedback and encourage you to share your thoughts. We ask that you be respectful of others and their points of view, refrain from personal attacks and stay on topic. To learn about our commenting policies and how we moderate, please read our Community Guidelines.