Caribou recovery continues to be looked at through draft plans

The Government of Alberta wants to hear from Albertans about the draft sub-regional plans for the Cold Lake caribou region
Apr 7, 2021 9:30 AM By: Robynne Henry 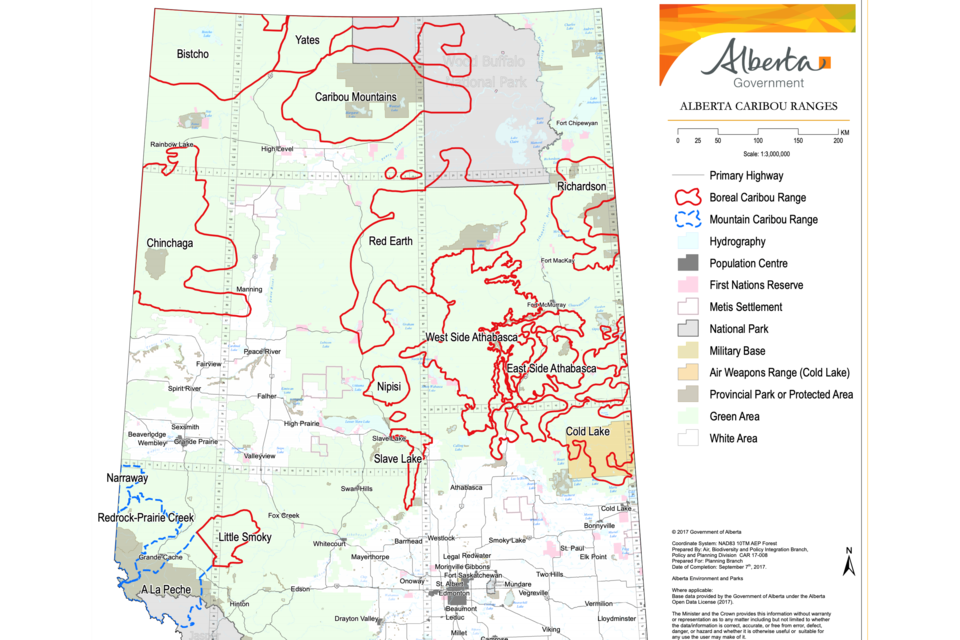 COLD LAKE – The provincial government wants to hear from Albertans who live, work, and play in Alberta’s caribou ranges, as it continues to work toward protecting the species.

Draft sub-regional plans have been created for the Cold Lake and Bistcho Lake regions to help support caribou herd recovery in Alberta.

Both plans consider a broad range of interests and land-use activities as part of the government’s commitment to maintaining a landscape that balances the needs of the environment with recreation and economic development. The sub-regional documents were created from recommendations from two of the caribou task forces that were created in late 2019.

Bonnyville-Cold Lake-St. Paul MLA David Hanson was the chair of the Cold lake subcommittee. He described the group as far-reaching with representation from the oil and pipeline industry, municipal leaders, environmental groups, forestry organizations, Indigenous and Métis, among others that were working toward the common goal of supporting caribou herd recovery.

“Basically, what we were facing was the federal government was going to impose restrictions and regulations,” Hanson said. “With us coming up with those meetings and our caribou recovery plan, we managed to sign Section 11 ( of the federal Species at Risk Act) with the federal government, which maintains jurisdiction over that with the Alberta government and Albertans. That’s why we’re looking for input from people in response to the report that we came up with, and the recommendations that came out of those groups.”

The three key aspects of each sub-regional plan, include guidance on where activities can be placed and for how long; restoration of narrow roads used by the oil and gas and forestry sectors in former projects that no longer contribute to economic activities in the region; and monitoring environmental and socio-economic indicators to evaluate the plans and make needed enhancements.

According to Hanson, it’s significant that the province was able to come to an agreement with the federal government.

“If the federal government had said that they want to shut down everything completely, that would have affected our area significantly. We’ve got some pretty specific caribou ranges up in the Cold Lake Air Weapons Range (CLAWR) and north of that. So that would have really hampered any further development or even existing operations.”

City of Cold Lake Mayor Craig Copeland, who represented the city on the committee, said he thought every important aspect was represented during the meetings.

“It’s pretty in-depth and, in my opinion, it’s a real balanced approach to dealing with the caribou population,” he said. “Trying to have an increase over time and also trying to make sure that the industry and recreation input isn’t impeding future growth of the caribou and we’re trying to strike a healthy balance. We still want people to be able to enjoy the outdoors, still be able to recreate, and be able to do their traditional land use.”

The draft Cold Lake sub-regional plan states the vision "reflects the land-use framework’s vision of Albertans working together to respect and care for the land and resources as the foundation of our economic, environmental, and social well-being."

It will provide direction and guidance to decision-makers and project proponents for the area.

“I’d like to thank the members of our caribou sub-regional task forces for their hard work and recommendations,” said Minister of Environment and Parks Jason Nixon, in late March. “Alberta has been leading the way in caribou conservation efforts over the past few years. These plans represent more progress on this important file. With Ottawa’s recent acknowledgement of Alberta’s strong caribou recovery actions, we are confident that our sub-regional planning process will find the right balance between protecting caribou herds while maintaining local industry and jobs.”

Residents are being asked to review the information provided at https://www.alberta.ca/cold-lake-sub-regional-plan-engagement.aspx, fill out a survey, and participate in online community information sessions. The sessions for Cold Lake are scheduled to happen on April 14, May 6 and May 18, virtually. Registration is required for online information sessions and space is limited.

There are two types of woodland caribou in Alberta – southern mountain caribou and boreal caribou. Both are listed as threatened under Alberta’s Wildlife Act and the federal Species at Risk Act.