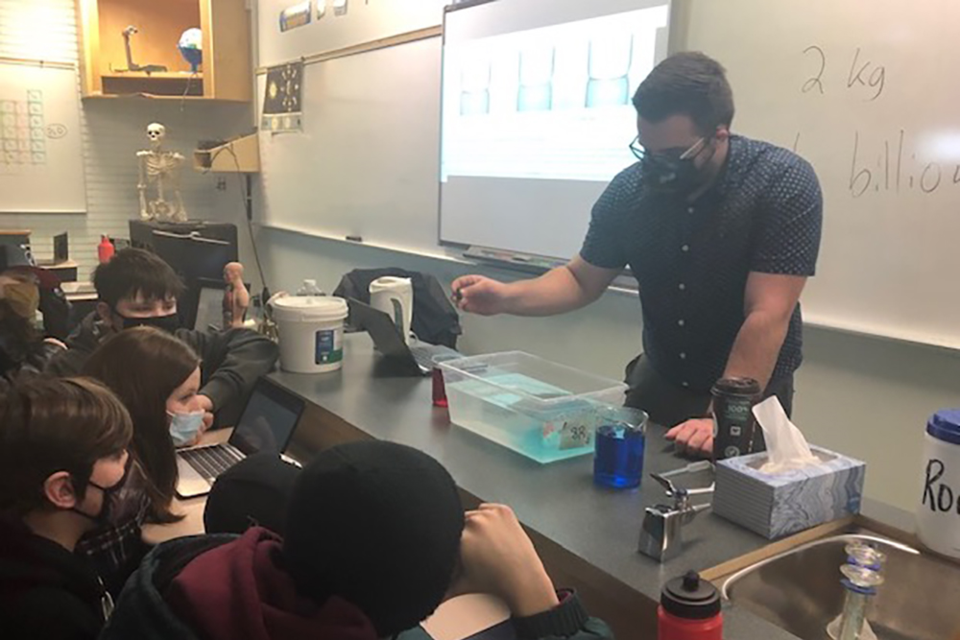 COLD LAKE – When Daniel Rogers was in Grade 8, his science teacher inspired him to enter the profession because of his passion and love for the subject.

“I wanted to be that and to do that to inspire students to be passionate about things that maybe people find not as interesting as other things in life,” he explained. “I just remember being so interested and invested in his classrooms because he just brought this energy out in all of us as students. I knew I wanted to do that one day.”

NLPS was a natural fit for Rogers, who's fiancé is from the area and also a teacher, but at Glendon School.

“We were both looking for teacher jobs and we were looking all over the place and I applied to a part-time teaching job at Cold Lake Middle School,” recalled Rogers. “I had an interview with my principal and it went great. I was just excited to have a part-time teaching job. I remember the day she called me back and was like ‘Oh, I’d like to offer you this position, but instead of it being part-time, we’re going to offer you a full-time teaching position for Grade 8 science,’ which was my dream job. I’ve always wanted to teach Grade 8 science and I was so ecstatic that I accepted right on the spot.”

Rogers believes in keeping his students engaged and said, "if they want to be there, want to be learning, then they will learn best."

One way he does this is through what he calls gamification, which he described as "bringing aspects of games into my classroom."

Class Craft allows students to create an online avatar that can be levelled up as they complete lesson-based quests. Students collect gold as they finish tasks, which can be used to level up their character and unlock outfits and pets.

“They also gain powers, which allows them to do different things in class,” detailed Rogers. “Like passing a question during a quiz, or working with a partner on an individual assignment, or listening to music during classwork time, and they have full access to all of these powers.”

According to Rogers, his students are engaging in class because they’re passionate about doing their work properly. He believes they’re motivated by the game.

“You can go into any classroom and ask a group of kids how many of them play video games and 95 per cent of them are going to raise their hands,” he exclaimed. “If I can take that and use that in my classroom, to engage with them to teach them about cells and systems, stuff that would normally have them nodding off in their sleep, but taking it and engaging with them and motivating them to really be passionate about their learning, I see that as a huge success.”

Rogers was surprised when he learned that he was among the NLPS finalists to be nominated for the Edwin Parr Award.

“I was just trying to enjoy myself and teaching here. I wasn’t doing it for anything other than wanting my students to enjoy me as a teacher. That’s what I wanted, and my principal said ‘we’d like to nominate you for the Edwin Parr’ and I said ‘oh my God, that’s just a huge honour.’ I was so happy and thankful. I wouldn’t be here without my great team at the school. My Grade 8 team that I work with here, as well as my administration. They’ve been supportive and helpful to me. They’ve given me free rein to introduce my ideas and be wacky with it. It’s been a great experience here,” Rogers expressed, adding that fiancé was one of the other finalists.

“We were both in the running to be nominated along with one other person. We knew that we were both potentials, final nominees for the district. We were both very supportive of one another.”

Rogers was born in Whitecourt and moved to Malaysia for six years. He headed back to Edmonton to attend high school before graduating and moving to Concordia University where he completed a degree in Fine Arts, majoring in drama and minoring in psychology. He attended Kings University with a focus on elementary education.

The Edwin Parr Teacher Award is presented to six educators throughout the province of Alberta. They were created to honour long-time Athabasca-area school trustee Edwin Parr. The winners are expected to be announced at the Alberta School Boards Association (ASBA) fall general meeting, which is scheduled to happen in November.