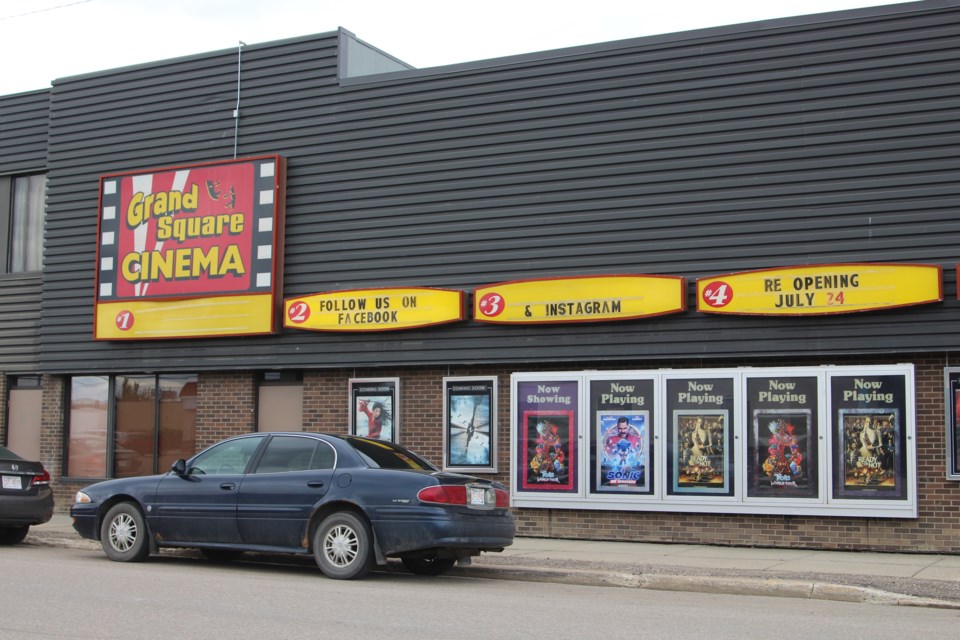 Grand Square Cinema in Cold Lake reopened to the public on July 24 after closing earlier this year due to COVID-19. File photo.

COLD LAKE – Movie lovers have the chance to enjoy a fresh bag of popcorn and watch a new flick on the big screen.

Grand Square Cinema in Cold Lake welcomed patrons back on July 24 after closing their doors earlier this year due to COVID-19.

Although movie theatres were included in phase two of the provincial relaunch, the local facility decided to push back their reopening to allow them time to complete renovations.

Noel May, vice president of May Theatres, which owns Grand Square Cinema, said they’ve been hard at work revamping the seats. Each theatre will feature luxury Palliser recliners and rockers.

“The recliners go all the way back, and the rockers are kind of similar to the chairs we had previously, but instead of stopping halfway up your back and being cloth, they’re a nice vinyl and they allow you to rock back in the seat,” May detailed. “They’re both great chairs, but everyone gets excited about the recliners.”

The seating upgrade was a part of a company-wide mandate to improve their locations, in Cold Lake, Lloydminster, and Wainwright.

“We did a big overhaul in Lloydminster last year and then we started planning for Cold Lake,” May noted. “We were thinking of doing the whole thing in late March and early April. We were already in the mix of it when COVID-19 hit."

As mandated by the province, Grand Square Cinema has COVID-19 protocols in place. Social distancing is encouraged, sanitizer will be available at the door, and staff will be wearing masks.

When purchasing tickets, the system will automatically block off two seats on either side to prevent people from sitting too close.

May encouraged groups to purchase their tickets together in order to block off those seats for everyone.

“You’ll notice that if you try to buy tickets online and someone’s purchased them, there will be a warning that says ‘try again, find a different spot.’”

He added, “We’ve had situations where people have called us up and said ‘oh, my friends bought tickets and I want to sit with them.’ We then encourage them to buy the seat past the two and then they can just move in because we’re still achieving that social distancing.”

Moviegoers are being asked not to arrive more than 20 minutes before their show time to prevent overcrowding, and don't go to the movies if they’re feeling sick.

Which films will be showed at the local theatre this year will vary, with a mix of classics and newer movies from earlier in the year.

“The reason is because we’re facing a lack of product due to COVID-19 in the United States because a lot of studios don’t want to release their big pictures because there’s still lots of theatres closed around the world,” May explained, adding it gives parents the chance to share a beloved memory of going to a movie they did as a child.

“We have an opportunity for everybody to see classic movies, and for families to share a movie experience that they might have had as a kid with their own kids.”

Opening day for Grand Square Cinema included the classic Jurassic Park and The Goonies, along with newer flicks Sonic the Hedgehog, Trolls World Tour, and Ready or Not.

May said they have also been reaching out on social media to see what movies people may want to see on the big screen.

“Usually, we try to play the latest and greatest if we’re able to, but there’s a big backlog due to COVID-19. We’re hoping it’s not much longer until we can show the big pictures we’re all waiting for.”