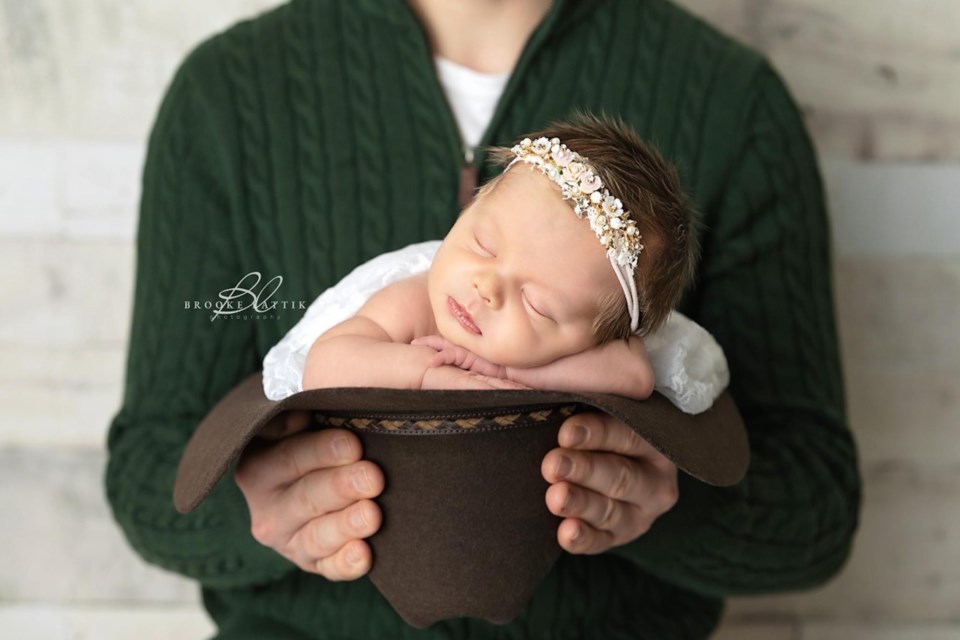 Anastasia Violet Barlow became Cold Lake’s first baby of 2021 when she made her grand entrance into the world on Friday, Jan. 1. Photo by Brooke Lattik Photography

Anastasia Violet Barlow was born at 2:27 p.m. on Friday, Jan. 1 at the Cold Lake Healthcare Centre. She weighed five pounds and 12 ounces and was measured at 19 inches long.

“We were very surprised,” Gillian said when asked if it was a shock to learn Anastasia was the city’s first new year’s baby. “I knew she was coming but I was very surprised that she came on the first of January. I was telling everybody I was definitely making it into the new year. I was not having a December baby, so we just barely made it.”

On New Year’s Eve, Gillian and Brandon went to the hospital and the doctor wanted to induce her. She decided to wait until the following morning until things started happening.

“We waited until 7 a.m. and she started inducing me. She came at 2:27 p.m.,” Gillian recalled, adding her experience in the hospital was excellent.

“We were the only couple there for any labour and delivery, so I feel like we kind of had all the help and resources from the hospital.”

When deciding on a name for their little bundle of joy, the new parents had a hard time agreeing on a name they liked.

“Anastasia was the only name we could agree on for a long time. Then we thought about it later and both my mom and Brandon’s mom, their middle names are Anne, so we thought it would fit pretty nicely that we would name our first daughter after both mothers.”

Both Brandon and Gillian are in the military and are originally from Ontario.