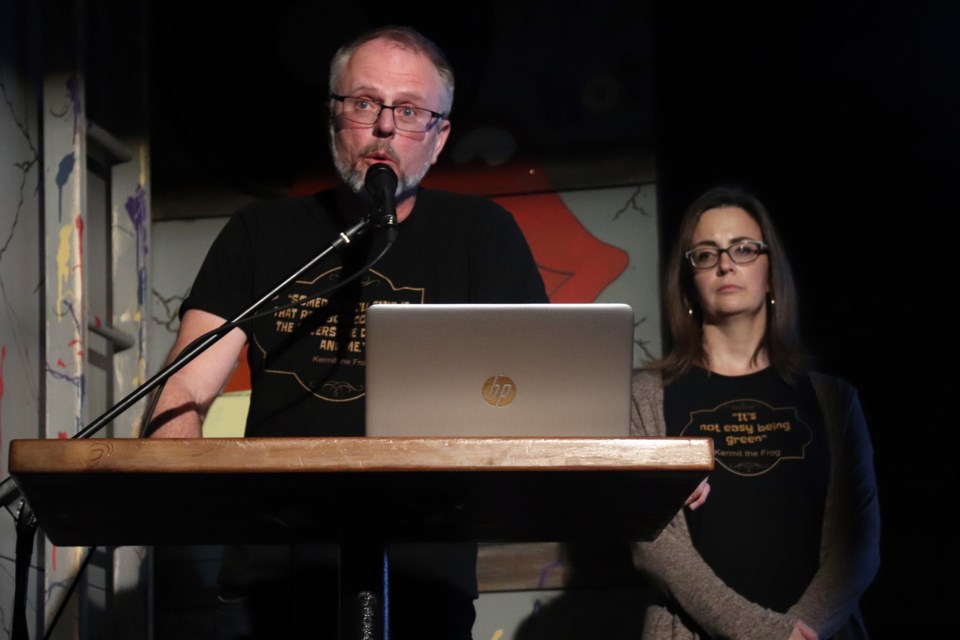 Craig Konechny, president of CLAES, explains why the Grande Parlour Theatre was in jeopardy. Also providing some insight into the future of the arts was vice-president for the CLAES, Esther Quiambao (right). Photo by Meagan MacEachern.

COLD LAKE - A future that at one point seemed bleak for the local arts community is now bright.

On Jan. 12, dozens of supporters braved the cold to attend an open meeting where the newly branded CLAES described their past, present, and future.

The possible closure of the Grande Parlour Theatre played a role in renaming the CLES, which will be managed by a board of directors and will remain a non-profit society.

They will also continue to own and operate the Grande Parlour Theatre, just like they have been since July 2018, explained vice-president of the CLAES Esther Quiambao.

After the Grande Parlour Theatre made it public last summer they would be forced to close their doors in the new year, the community came together to brainstorm ways to prevent that very scenario from unfolding.

“Making the decision to close this space wasn’t taken lightly and it was difficult to convey properly the many reasons why it wasn’t working. This board doesn’t have all of the answers and we’re learning and evolving as we go, but this board did always feel that out of the ashes of one failure, something new and stronger was possible,” described CLAES president Craig Konechny. “After our announcement, we were approached by many organizations and individuals that had ideas and from each one of those discussions, a piece of an idea or conversation came together to finally create a more positive picture worth exploring.”

According to Konechny, it wasn’t just the Cold Lake Agricultural Society stepping in and extending their support or the theatre’s landlord offering to reduce their rent that has kept the theatre afloat. Their decision to offer fewer, but larger-scale productions in order to prevent cast and crew burnout and an overall new direction has kept them from going under.

“It’s very difficult to pin down one reason and even more difficult to make everyone understand all of the inner workings of this space,” he continued.

There are changes on the horizon for the theatre. Not only will the space now be open for public meetings and events, including weddings, they’re also taking their shows to a whole new stage.

“The other thing we’re changing up, is we will be holding only one or two theatre productions per year outside of this theatre space,” Quiambao explained, adding they will also be “pursuing more opportunities with other societies, non-profit organizations, and businesses.”

“We will be contracting our unique skill set and expertise for these groups and events... These partnerships will be a part of our success for the future,” she continued.

With the assistance of the Cold Lake Ag Society, the CLAES will be showcasing a brand new production in May, which Konechny described as “the most incredible and unique evening of entertainment you will ever see.”

The show will mix performing arts and music with a live sporting event and “be the first of its kind that we know of.”

“The ag society approached us a few days after our closure announcement to discuss what they could do to help arts continue in this community. They planted the seed for what this board feels is the start of a new direction and the potential of a long-term partnership in continuing arts in our community,” expressed Konechny.

While the CLAES relocates their Grande Parlour Theatre productions to the Agriplex, the opportunities to host workshops and programming will be endless in the theatre itself, Quiambao said.

“The Grande Parlour Theatre isn’t just going to be a rental venue, it’s also going to be our central educational centre for all of our workshops and youth programs, and for any community groups.”

They also intend to bring the performing arts into local schools, and according to Konechny, “developing arts programming in our community and continuing to build on the foundation we have started.”

“This is far from a slam-dunk solution to the arts in this community. As a community and other arts organizations, we have to work together to be involved and to have meaningful impact. Arts are the small voice when it comes to other worthy organizations in our community, but deserve no less attention for the impact mentally and economically the arts provide. All of this means nothing if we don’t raise our hands and choose to be a part of something, I believe, is truly unique and special,” Konechny said. “Moving forward, this board needs to reinvent itself and a structure of community members need to get involved in a meaningful way so that this board can focus on the big picture.”

Bonnyville resident Angie Labrie said her heart was broken after hearing the news that the local theatre may have to close, and attended the event as a means of showing her support for the arts community.

Labrie said learning there’s a future for the Grande Parlour Theatre and what it brings to the area was “two thumbs way up.”

“(The theatre) is not just specific to Cold Lake, it’s specific to the Lakeland,” stated fellow Bonnyville resident Sylvie Hedges.

Cheryl Fields is new to Cold Lake, but that didn’t stop her from agreeing with her fellow table mates. She is also passionate about keeping the arts alive locally, and offered her support to the CLAES.

Konechny and the board ended the afternoon answering questions and seeking the assistance of those who attended.

“Just maybe, if we all dream big enough, we can be the leaders for sustainable arts and a template for all other rural communities to follow. Just imagine,” he said.